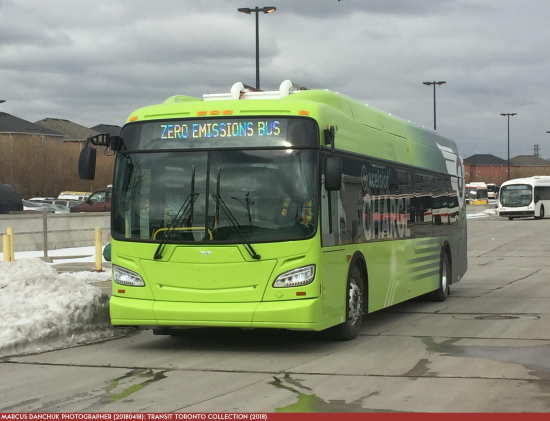 This award follows on the original TTC order from New Flyer in June 2018 for ten battery-electric Xcelsior CHARGE buses, and increases TTC’s total order to 20 vehicles.

The original contract was TTC’s first transit bus order from New Flyer since 1999, and has an additional 20 options remaining. The purchase also includes five ABB direct current (DC) depot chargers that conform to the Society of Automotive Engineer (SAE) J1772 Combined Charging System (CCS Type 1 Connector), allowing the chargers to support other types and makes of electric vehicles operating for the City of Toronto.

The chargers will be commissioned by New Flyer Infrastructure Solutions and ABB.

TTC is the public transit agency operating bus, subway, streetcar, and paratransit services in Toronto, Ontario. As the third-largest transit system in North America, TTC delivers more than 536 million passenger trips each year, and has integrated sustainability into its multi-year plan to reduce greenhouse gases, air pollution, and congestion on Toronto roadways.

The TTC’s electric bus program aims to transform mobility in Toronto with a 100% zero-emission bus fleet by 2040, which includes a commitment to purchase only zero-emission buses by 2025. This program will assist TTC and the greater public transit community in developing bus and electrification specifications for future procurements.

NFI has more than 50 years of experience in manufacturing zero-emission buses (ZEBs), with more electric buses on the road in North America than any other manufacturer. In 2018, New Flyer became the first bus manufacturer in the world to sign on to the Shared Mobility Principles for Livable Cities, joined the Charging Interface Initiative (CharIN) to support industry charging standards for all electric vehicles, became the first licensee outside the Volvo Group to join OppCharge in North America, and celebrated the Canadian Urban Transit Research and Innovation Consortium’s (CUTRIC) launch of the Pan-Canadian Electric Bus Demonstration and Integration Trial—the world’s first multi-manufacturer interoperability demonstration for fast-charge electric buses—of which New Flyer was a contributing member.

How many GCG posters are interested in electrified buses and pollution-GHG reduction?

None or about none?