In Australia, QUT researchers and Mercurius Australia are partnering on a pilot plant to prove the economic viability of turning sugarcane waste into either jet and diesel fuel or chemicals that could be used to make plastic soft drink and beer bottles.

The patented REACH technology, developed by US-based parent company Mercurius Biorefining, has the potential to convert sugarcane bagasse and other biomass into cost effective drop-in biofuels and bio-chemicals, as alternatives to fossil fuels. 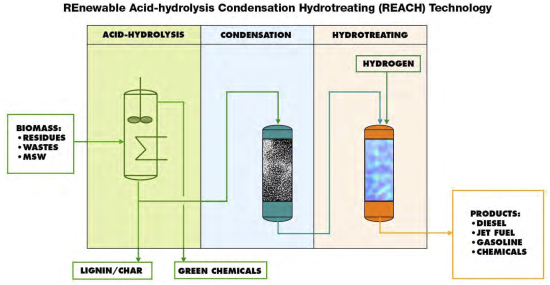 The first step in the REACH process is to treat non-food biomass in an acid hydrolysis unit to create a mixture of non-sugar intermediates in high yields. The intermediates are then processed through a condensation unit into usable carbon chains.

The final step is a hydrotreating process to deoxygenate the intermediates. The final fuel products are drop-in blend ready for use in the general liquid fuels market. High value chemicals are also produced and could be sold into higher value markets.

The process is indifferent to the biomass feedstock and both cellulose and hemi-cellulose are processed at the same rate with the same cost structure. The process is significantly faster than many other biofuel production methods, has lower capital and operating expenses, and does not rely on food crops for feedstock.

Dr. Rackemann said the pilot plant would have a flexible technology base that would allow targeting production of renewable fuels and green chemicals. He said the work by QUT researchers proved the system worked in producing grams of chemical and fuel samples, while the pilot plant this year would be able to demonstrate the viability of manufacturing kilograms of chemical and fuel samples.

The science has been proven. The engineering now is trying to prove the economics. And once the economics are proven, we can roll out the technology further.

Support and funding for this project was provided by the Queensland Government’s A$150-million Jobs and Regional Growth Fund, which helps to facilitate private sector projects that create employment and economic growth opportunities in regional areas.

Along with leading QUT’s involvement with the Mercurius pilot plant, Dr. Rackemann also recently was awarded an Advance Queensland Industry Research Fellowship of $300,000 to assist the development of Mercurius REACH technology commercialization in Queensland.

While the initial focus of the pilot plant is investigating the conversion of biomass into fuel, the technology has the potential to create chemicals that could be used to make polyethylene furanoate (PEF), a completely bio-based polyester used to make bottles, films and fibers as an alternative to Polyethylene terephthalate (PET) plastic produced from fossil fuels.

Mercurius Biorefining founder and CEO Karl Seck said the project to develop the pilot plant with QUT was a continuation of a relationship with the university that began more than five years ago.

Great to see the dream develop!