Volvo Cars is releasing upgraded and newly-developed electrified powertrain options to be made available across its entire model range going forward. The company has upgraded its existing T8 and T6 Twin Engine plug-in hybrid powertrains, while at the same time confirming that plug-in options will now be available on every model it produces. 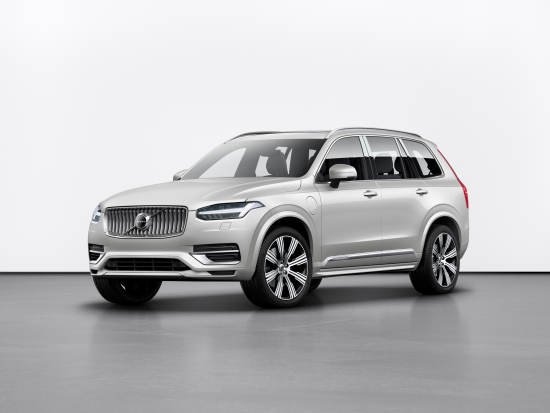 Volvo Cars will also introduce a range of mild hybrids in the coming months, starting with diesel and gasoline versions on the XC90 and XC60 SUV models.

These mild hybrids for the first time offer customers Volvo’s advanced kinetic energy recovery braking system, which is coupled with its existing internal combustion engines to create a new integrated electrified powertrain, under its new ‘B’ badge.

The new brake-by-wire system interacts with the energy recovery system and reduces fuel consumption and emissions by recovering kinetic energy under braking.

Volvo Cars has upgraded its production capacity so that up to 25% of total production can be Twin Engine plug-in hybrid cars. In addition, it expects its new ‘B’ badged powertrains to gradually become the new standard, moving it closer to its goal that by the middle of the next decade all of its cars will be electrified.

There will be new and upgraded powertrains introduced on Volvo’s larger Scalable Product Architecture (SPA)-based cars.

The upgraded T8 Twin Engine plug-in hybrid with up to 420 horsepower features a new battery and brake-by-wire advanced battery charging. The range of the T8 powertrain has increased by around 15% and this powertrain is available on all 90 and 60 Series cars.

An upgraded version of the smaller capacity T6 Twin Engine plug-in hybrid is also combined with the new battery and brake-by wire-technology. This powertrain also offers an approximate 15% range increase and is available on the V60 wagon and S60 sedan.

The XC90 will be available with a B5-badged mild hybrid gasoline or diesel variant, as well as a B6-badged gasoline mild hybrid.

On the XC60, customers will be able to choose between a B5 mild hybrid gasoline or diesel variant, a B4 diesel mild hybrid as well as a B6 gasoline mild hybrid. The B5 gasoline model will be available with front wheel drive or all-wheel drive.

Volvo Cars has upgraded its production capacity so that up to 25% of total production can be Twin Engine plug-in hybrid cars.

25% of production is a VERY good start, but only a start.

@Engineer-Poet They make what sells. Like all automakers do. Not that the EVangelists will understand that.

E-P:
Exactly
MacA:
I think most EV evangelist understand the stumbling block is the batteries. But, we also understand that ICEs, not matter the size, last 15-20 years as pollution machines..

ORLY, MacAaron?  Do catalytic converters and particulate filters "sell", precisely?  Or is it the case that a vehicle not having the required equipment will not be allowed on the road?

Government could simply require that 50% of vehicles sold be plug-ins, and use feebates or other means to shape consumer preferences.  It could do this in the name of emissions control, noise reduction and a host of other public goods.

Lad has it dead-nuts on:  batteries are the difficulty.  Right now the cost and production capacity for batteries puts the sweet spot somewhere between HEVs and PHEVs, with the balance shifting toward PHEVs over time.  Even today, just ONE Tesla Gigafactory could hybridize every LDV sold in the USA with a 1.5 kWh battery, with capacity left over.  3.5 Gigafactories could make every LDV into a PHEV carrying 10 kWh.  My experience is that a PHEV uses about 1/5 the liquid fuel of the ICE version of the same vehicle, so a new vehicle fleet that was required to be 50% PHEV and at most 20% ICEV would produce an immediate and rapid reduction in liquid fuel consumption.  This would suffice to eliminate the USA's remaining net crude oil imports probably within 5 years, with a consequent increase in energy security due to the innate energy substitution capabilties of the electric grid.

Energy security is a huge advantage that never seems to be touched on. Here in Australia, after the closure of most local refineries we now source much of our fuel from refineries in East Asia. We have very limited reserves of most fuels, which means if anything disrupts our northern shipping lanes (such as a belligerent China), we are in imminent trouble. China is beginning to push back on trade with Australia given the increasing frictions over issues such as disallowing Chinese firms to build our 5G networks, so it's no stretch to imagine some negative future scenarios.

With a large proportion of PHEVs/EVs, we would be much less susceptible to aggressive neighbours. You'd think this issue would be a natural fit for the right-of-centre parties, but they're too busy bashing anything with a green tinge, while most of the population are only interested in our national obsession, the housing market, and the current fall in house prices and hence debt-fuelled wealth.

@EP, "just ONE Tesla Gigafactory could hybridize every LDV sold in the USA with a 1.5 kWh battery" - well said.
You get much more bang for your buck with hybridisation that pure EVs. The batteries in a Hev can be any size, and any size up to a typical day's driving makes sense.
The battery for a pure EV will be sized towards the occasional long run, and thus there is pressure to add more and more KwH to vehicles which rarely use the top 50%.
Also, for city use, even mild HEVs are useful as they keep the ICE engines off when stopped in traffic.
My only worry is the extra cost of hybridisation, but as more people do it, the cost will come down and the performance will go up.

You get much more bang for your buck with hybridisation that pure EVs.

Bang for your battery, at least.  You also get limited benefits; the small alternator of hybrids just can't absorb very much power, so regeneration capability has a lower ceiling.

My only worry is the extra cost of hybridisation, but as more people do it, the cost will come down and the performance will go up.

I suspect that a lot of the cost will be offset by savings from electrification of things which are now driven mechanically:  power steering, water pump, A/C compressor.  This doesn't just eliminate the belt drives and pulleys and the parasitic drag they have even when not in active use, but also hoses and other maintenance issues which sometimes fall in the warranty period.  As the vehicle fleet switches over to electric accessories as the default there will be no additional costs for those in the HEV/EV segment, and the elimination of the redundant mechanical accessories will put the economies of production scale on the electric side.

The big difference comes when you switch over from something like a BAS to a drivetrain which supports engine-off driving.  The shift-free transmission style used by Toyota and Ford substitutes electronics for gearsets and clutches.  That seems simpler and likely cheaper to me, but I have no personal knowledge of the actual costs.

Interim solutions often offer the most economical short term returns. It is presently the case for HEVs/PHEVs versus BEVs/FCEVs.

Another worthwhile (longer term) solution would be PHEVs with a small on board FC as a range extender. The relative size of the battery pack and FC could be based on user needs. No home charging facilities would be required for the 40% to 50% of vehicle owners without that possibility. Of course, more clean H2 stations would have to be built. Major Oil/Gas organizations could quickly add H2 distribution to many of their existing Gas/Diesel stations.

Thus, if you are charging in France or Norway, it is probably low CO2 most of the time, while if you are charging in Germany (or Ireland) it could vary a lot. Germany has loads of solar and wind, (which is great) which is backed up with lignite which is awful - almost the worst fuel possible. (Ireland has mainly wind or gas(+peat(!)), but the CO2 / KwH level can vary form 200 to 600 gms/Kwh depending on the wind state).

Hey, anything that makes the idiotic move of taking emissions-free nuclear power off the grid look and sound idiotic to EVERYONE is a good thing.

The problem with nuclear power is the fuel is expensive; but, not if you can find a way to use it to almost complete depletion. And,of course the poor worse case analysis engineering that allows human mistakes to radiate the environment.

My hope is that someone will become interested in developing wave energy to generate power. Wave energy is almost completely predictable unlike wind and solar.

The problem with nuclear power is the fuel is expensive

The first fuel load is perhaps 3% of the cost of putting a nuclear plant on-line, and on-going fuel costs about 0.39¢/kWh.  That's for LEU used on a once-through cycle.  Breeder cycles would have negligible uranium costs, as almost everything would be in the handling.

My hope is that someone will become interested in developing wave energy to generate power.

People have been interested in wave energy for decades.  The oceans have a way of breaking anything that's cheap enough to generate economic power, and that power isn't generally very dense:  something like 50 kW/m of front.  Developing 50 GW would take 1000 km of collectors.  By contrast, a 4-unit nuclear plant could be put on 1 km of shoreline and develop 4.8 GW using 20-year-old designs; that's 4800 kW/m, about 100 times as much.

Ah, right, it's Monday and AlzHarvey is back to work, posting completely irrelevant Greenie boilerplate that has no relationship to either the post or the comments preceding him.

If you ask him anything about his comment, like "WHAT lower cost, near future, storage units", he'll have no answer.