Cars have been evolving with increasingly complex circuitry. SEAT’s Ateca crossover (SEAT is a Volkswagen Group company, the Ateca is based on the MQB platform and is related to Volkswagen’s Tiguan) features a complex arrangement of wires more than 2.2 km long. 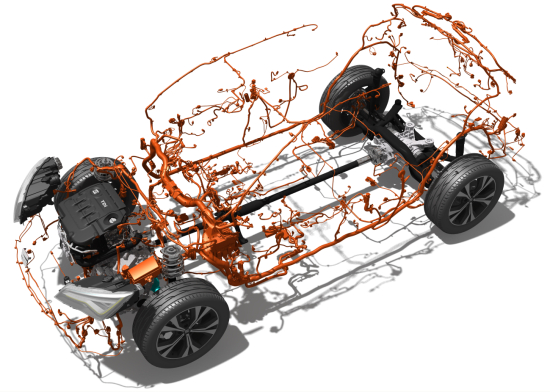 The wires, ranging from one millimeter to one centimeter in thickness, are behind the car’s lighting, sound system or driving assistants such as the blind spot detector. Up to 100 sensors and control units interact with each other whenever a vehicle function is activated.

Models such as the SEAT Ateca contain more than 1,350 wires which, when laid out in a straight line, would stretch more than 2,200 meters in length, similar to an airport runway. The wires branch off into more than 30 circuits that “ensure the operation of nearly every car function and transfer power from location to another, just like blood flowing through an organism”, says Pedro Manonelles, an engineer at the SEAT Technical Centre. 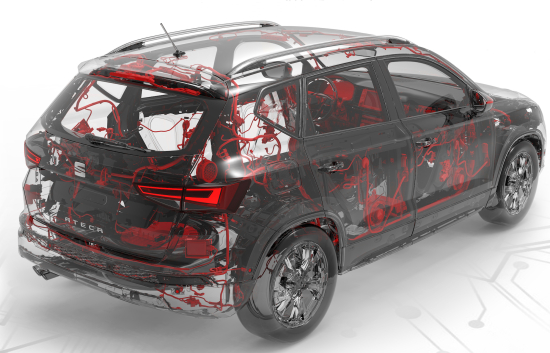 Most of the wiring is concentrated in the area of the front instrument panel, where more than 200 wires form strands of more than 4 centimeters in thickness.

All the wiring on a car such as the SEAT Ateca weighs slightly more than 40 kg.

Copper is the most widely used metal for electrical conduction, but its high density, which is greater than that of iron, makes us optimise its use in order to achieve the biggest possible weight reduction.

It takes a team of 20 engineers three years to define the routing of the wires, the power distribution and the data transmission among control units and sensors.

Assistants such as the blind spot detector are an example of how the car’s electronic system works. When the driver activates the left turning indicator, a signal travels from the main control unit to the rear mounted radars in a fraction of a second. If there is a car in the blind spot that the driver cannot see, the radars will detect it and activate and send a warning light to the door mirror. Thanks to this alert, the driver knows whether it is safe to change lanes.

In some of today’s SEAT models there are more than 12,000 unique wiring combinations; this figure could increase in the future.

The current Can Bus protocol reduces the complexity of vehicle wiring by replacing direct wiring with a two wire signal buss so that device computers and sensors can communicate with each other. There are ideas to replace much of this wiring with an ultra fast central processing unit and bus instead of the current slower distributed processing systems.

I can absolutely guarantee you this car contains several J1939 CAN buses. It still takes a lot of wire to do the job. There are oodles of sensors.