Adamas Intelligence: EV market is growing fast, the EV itself is evolving even faster

In 2018, 4.28 million BEVs, PHEVs and HEVs were sold globally—an increase of 28.6% over the year prior—amounting to 5.2% of total global passenger vehicle sales, according to Adamas Intelligence.

Not only is the EV market growing extremely rapidly, the modern EV itself is also undergoing a rapid technological evolution, from model to battery pack to cell and cell chemistry, Adamas says. 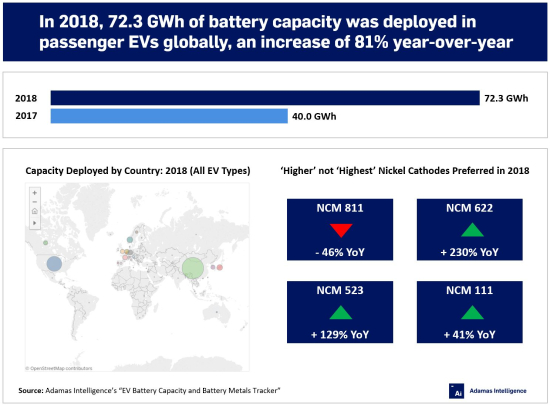 And Cobalt prices on the London Metal Exchange are going down.

When you consider in 1996 GM introduced a successful EV-1 on the market and then crushed them, I can't agree that now in 2019, when the car makers are finally getting serious about building cars in 2020, the timeline is considered 'fast.' Seems to me the carcos and oilcos have been very successful in holding back EV production; and, if not for Tesla and Musk, we would most likely be talking 2030 for oems to start EV production, another 10 years of obsolete internal explosion engines.