According to a new report from the California Center for Jobs and the Economy, California’s cumulative plug-in vehicle (PEV, including PHEVs and full EVs) sales are at 10.5% of the state’s 5-million ZEV unit goal for 2030. True ZEVs—battery electric vehicles and the handful of fuel cell electric vehicles—are at 5.6% of goal. 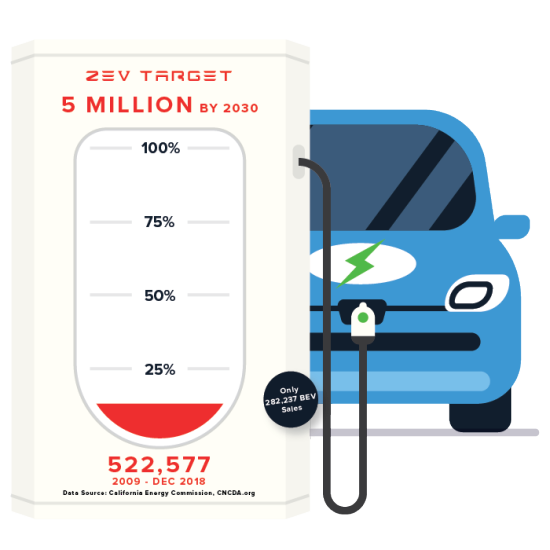 Accounting for normal fleet turnover rates and reductions from persons moving out of California, PEV sales would need to be 2.9 times higher to meet the 2030 goal, according to the report, which mainy analyzes Q4 2018 results. True ZEV sales would have to be 5.0 times higher. These numbers assume, the report cautions, that the current market share will remain elevated above the long-term average.

Background. As part of the AB 32 climate change program, Executive Order B-48-18 administratively created a goal of 5 million zero-emission vehicles (ZEVs) on California roads by 2030. This action expands on the prior Executive Order B-16-2012, which set a goal of 1.5 million by 2025, with a sub-goal that their market share is expanding at that point.

While these goals were set administratively, they are reflected in the state’s climate change strategies, and both public and utility ratepayer funds are being used to create the refueling infrastructure required for these motorists.

However, rather than only true ZEVs, the numbers in the Executive Order and previous interpretations by the agencies indicate the goal is to be achieved by both BEVs that run only on electricity and plug-in hybrids (PHEV). Consequently, only a portion of the vehicles being counted to meet the zero emission goal—roughly half based on current sales volumes—will in fact produce zero emissions when driven. Additionally, FCEVs (fuel cell electric vehicles) also would count towards the ZEV total, but data from the California New Car Dealers Association (CNCDA) show total market share for these vehicles to date at a mere 0.1%.

Using this more flexible interpretation that includes both true ZEVs and combustion PHEVs, total PEV sales since 2009 account for 10.5% of the 2030 goal. True ZEV sales, however, account for only 5.6%.

BEV sales. BEV sales saw a substantial increase (from 3.0% to 6.0% share of total sales), but primarily as a result of Tesla’s continued delivery of vehicles from prior orders, the report says. Tesla sales volume in this quarter was 25,969 (all models)—78% of all BEVs sold in the state.

While the BEV component is likely to continue rising in the next few quarters as Tesla continues to ramp up production, the longer term market penetration of BEVs will not become clear until several current extraneous factors work themselves out, the report suggests.

PHEV sales continued to rise at a lower level, offset partially by a dip in HEVs compared to the year prior.

Since 2013, sales of alternative fuel vehicles (BEVs, PHEVs and HEVs) deviated little from an average market share of 9.1%. However, the sales mix has changed as consumers open to these vehicles shifted from HEVs to PEVs as more models became available.

The 2018 results finally show a departure from this long term share, with alternative vehicles reaching a 14.2% market share in the last quarter and 12.0% for the year overall.

Consumer shifts to light trucks for the US outside California continued to be more pronounced, accounting for 70.6% of new light vehicle sales in this quarter and 68.8% for the year overall.

The potential for California’s ZEV policies to be replicated beyond its borders remains low as the market segment targeted by most PEV models—cars—continues to contract as a result of consumer preferences, the report suggests.

The trend towards light trucks continues in spite of higher fuel prices. The average California price for regular gas in Q4 2018 was $3.70 a gallon, 19.5% higher than the prior year’s $3.13.