The share prices of more than a dozen rare earth materials (REE) companies in China are up 20% or more year-to-date (through February 26, 2019) on the back of strong profits in 2018 and a promising long-term outlook for value-added rare earth materials, such as NdFeB permanent magnets, according to Adamas Intelligence. 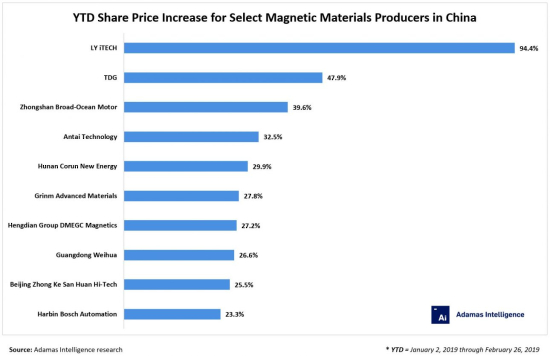 China’s NdFeB permanent magnet production increased by 5% in 2018 while domestic NdFeB consumption increased by approximately 6%, keeping the market tightly balanced, as evidenced by a rise in prices for 31 NdFeB grades in 2018 versus the year prior.

In 2018, China’s NdFeB exports increased 11% over the year prior. This uptick in exports coincided with a weakening of the Chinese Yuan relative to the US dollar (the primary currency of China’s exports), boosting the value of exports at home for China’s major suppliers.

From April through December 2018, the value of the Chinese Yuan dropped 9% relative to the US dollar as a result of the ongoing US – China trade war.

While the average price of all NdFeB grades increased in 2018, the input cost of rare earth metals used to produce NdFeB—such as didymium (NdPr metal) and dysprosium—decreased overall, further boosting the profitability of China’s magnetic materials manufacturers.