A new study provides the most detailed picture available to date of the global, regional, and local health impacts attributable to emissions from four transportation subsectors: on-road diesel vehicles; other on-road vehicles; shipping; and non-road mobile engines such as agricultural and construction equipment. 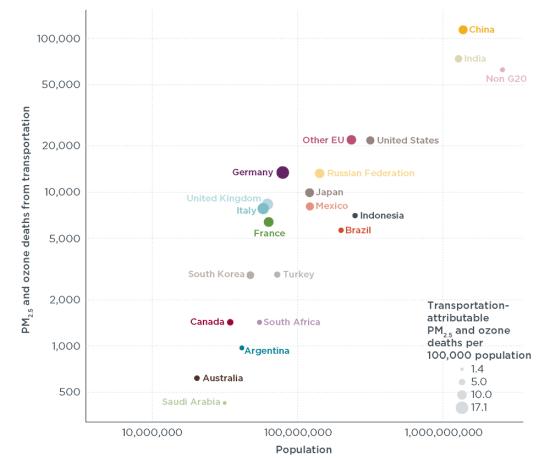 The study, by researchers from the International Council on Clean Transportation (ICCT); George Washington University Milken Institute School of Public Health; and the University of Colorado Boulder, links state-of-the-art vehicle emissions, air pollution, and epidemiological models to estimate health impacts at the global, regional, national, and local levels in 2010 and 2015.

An estimated 84% of global transportation-attributable deaths occurred in G20 countries, and 70% occurred in the four largest vehicle markets in 2015: China, India, the European Union, and the United States.

Exhaust from on-road diesel vehicles was responsible for nearly half of the impacts (~181,000 premature deaths) worldwide, and fully two-thirds in India, France, Germany, and Italy.

Together, PM2.5 and ozone concentrations from transportation emissions resulted in 7.8 million years of life lost and approximately $1 trillion (2015 US$) in health damages globally in 2015.

The global health burden of on-road diesel vehicles, including the PM2.5 and ozone impacts of all tailpipe emissions, is 68% higher than previously estimated for diesel NOx emissions, because it includes the effects of tailpipe PM2.5.

The distribution of health impacts and air pollution from transportation is influenced by policy, demographic, economic, and technological changes.

Transportation-attributable health impacts declined in the United States, European Union, and Japan as vehicle emission standards have been implemented, but these reductions have been offset by growing impacts in China, India, and other parts of the world. Unless the pace of transportation emission reductions is accelerated, these health impacts are likely to increase in the future as the population grows, ages, and becomes more urbanized.

—Susan Anenberg, lead author of the study and an associate professor at the George Washington University Milken Institute School of Public Health

The high public health burden of diesel vehicles in Europe underscores the need for world-class emissions standards to be accompanied by robust compliance and enforcement. The long lifetime of vehicles and equipment and the increasing health burden in regions without adequate protections stress the urgency to introduce world-class standards, develop compliance programs, and adopt in-use measures that accelerate the replacement of high-emitting vehicles.

—Joshua Miller, co-author of the study and a senior researcher at the ICCT

Ambient air pollution is the leading environmental health risk factor worldwide, contributing to 3.4 million premature deaths annually from heart and lung diseases and diabetes, according to the Global Burden of Disease (GBD) study 2017. Previous studies had estimated the global health burden of emissions from all transportation sources, and from subsectors such as land transportation and shipping, in 2005, 2010, and 2014, but none had evaluated health impacts at the same level of granularity as this study.

The study assessed health impacts of transportation emissions using the GBD 2017 methods, which consider the impacts of ambient PM2.5 and ozone exposure on incidence of six disease categories. Those methods do not quantify the direct health impacts of nitrogen dioxide (NO2) exposure, which is associated with asthma incidence among children worldwide and asthma emergency department visits. 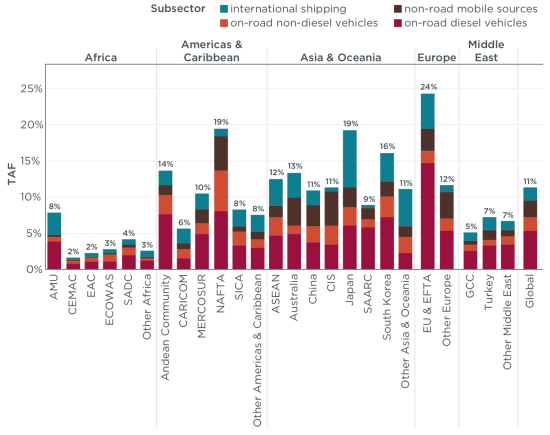 However, NO2 is a precursor to both PM2.5 (in the form of nitrate aerosols) and ozone levels, so policies that target reductions in NO2—for which many European cities exceed EU air quality standards—would reduce the incidence of premature deaths from ambient PM2.5 and ozone, the health endpoints that were quantified for 2010 and 2015 in this study.

Recent evidence indicates that the health response to PM2.5 pollution may be greater at high concentrations than previously estimated, and that air pollution may be associated with chronic kidney disease, preterm birth and other birth outcomes, and cognitive decline. Consideration of these impacts would likely increase the estimate of health impacts from vehicle exhaust emissions.

Another substantiated evidence that our (profit at all cost) unregulated industries will eventually create enough pollution to kill and/or adversely affect the health of most living creatures and nature.

The electrification of transport vehicles, homes, offices and industries with clean lower cost electricity from REs will have to be addressed at a faster rate?

It is interesting that in the process of engineering to meet stricter smog standards, the introduction of direct fuel injection in gasoline engines has actually increase the production of harmful particle toxicity. We may be at the point where internal combustion engines can no longer reduce their smog levels without replacing the engine with an electric motor.
We also need to have the Government Agencies make a serious and concerted effort to reduce the gross pollution generated by jet engines and seagoing diesel powered ships.

It seems to me that 'Government Agencies' caused a lot of the problem in Europe by favoring diesels to reduce CO2 emissions.
Now we have "...normalized by population, the urban areas with the highest number of transportation-attributable air pollution deaths per 100,000 people were Milan, Turin, Stuttgart, Kiev, Cologne, Haarlem, Berlin, Rotterdam, London, and Leeds."
That is an appalling list of first world cities with the world's worst pollution deaths.

Why would the three major cigarette makers have to pay ($18B) penalty for health damages in our Province and ICEVs makers seem to get off completely free?

A Class Action may be overdue? What are we waiting for?

Because the ICEVs lobbyists are doing a better job than their colleagues in the tobacco industry.
Another reason may be that the lethal effects of smoking can be traced more directly; the lethal effects ICEVs are proven more indirectly.

Or, because ICEVs manufacturers and Oil/Gas firms are and have been heavily subsidized and are major contributors at election times?

Limiting political contribution to $100 per individual and $1000 or $10000 per firm/organization and banning subsidies to pollution creators and baby food and all food with high level of arsenic and insecticides may have a long term positive effect.