The Irizar Group is introducing the electric Irizar ie truck into its range of zero-emissions products. This stylish electric truck responds to several market needs and makes it possible to drive in cities and urban areas without creating any atmospheric or acoustic pollution.

Irizar presented the ie truck within the framework of the first edition of the Sustainable Urban Mobility Congress (SUM), which was held in Bilbao from 20-23 February. 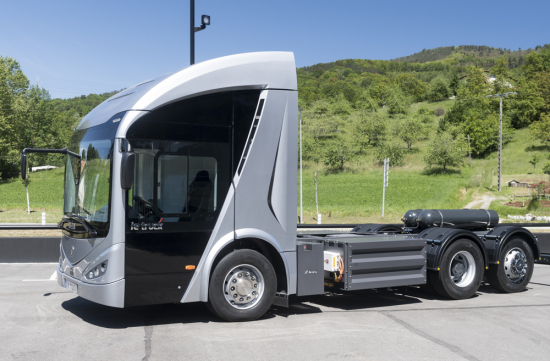 The Irizar ie truck presented is an electric version with a CNG range extender, so it can drive in electric mode in the city while being able to extend its autonomy and expand working time using an engine that runs on natural gas. Different variations of the purely electric version are currently being developed.

This platform is the outcome of an R&D project developed alongside the Group FCC, which is a global leader in environmental services, integral water management and developing and building infrastructure and other technology centres. The Group FCC contributed their knowledge and experience in operating urban services and, in consequence of the successful outcome of the collaboration, the first prototype equipped with side loading bodywork for waste collection has been produced. It is expected to reach the market in the coming months.

Comfort and safety were priorities in developing the cockpit. The low position of the driver’s seat, the width of the windscreens and side windows and ergonomic access to all the controls and the dashboard screen are features emphasized in the design.

The Irizar ie truck includes technology developed within the Irizar Group that has already been used for electric drive systems in its electric buses, energy storage and control electronics, in addition to the rest of the systems supplied.

The cabin was developed exclusively for urban applications. The cabin has a 4-person capacity and a single access stairway with the goal of ensuring safe transport for the driver and their companions. That fact makes the vehicle the one with the lowest access height on the market.

The unit being presented is an 8-meter-long 6x2 version with a carrying capacity of 18 tonnes.

The vehicle has regenerative braking functionality so the kinetic energy of the vehicle can be used as much as possible.

It includes a pneumatic door that swings inwards, which makes for safer transport when faced with any obstacles in the road. Furthermore, the door includes anti-entrapment sensors, a photocell and a sensitive edge on the leaf to avoid any kind of unintended incidents during faster application.

It is equipped with the latest technology in active safety and it has stability control. Lane changes (LDWS) can be detected because of the built in camera and front radar sensor and the driver is alerted if the vehicle swerves unintentionally. It also has emergency assisted braking (AEBS), which activates the emergency brake if the vehicle gets too close to the vehicle on front of it and the driver doesn't react in time.

The suspension of the Irizar ie truck has automatic levelling and provides special functions for different applications (ELC).

This is a really good idea. It is an obvious thing to do, but you don't see it being done.
So I wish them well.
P.s. Irizar is in the Basque country in Spain.
EV with range extender is a great technology as it can get by with much less battery than a pure EV and yet has whatever range you want. + If you are using CNG, you will have little exhaust emissions.

The low driver position is something that smacks you in the face once you think about it.  Cab-over-engine tractors need to leave room for the engine, but with only a small CNG engine and sidesaddle batteries you don't have that constraint anymore.

But... seats 4?  What truck driver is going to carry 3 passengers?

The special cabin/windshield design looks a lot like the front of new e-buses? Could this be the potential next step?

Good idea, it still has Nox emissions, but on the right track.