Volkswagen is setting up a pilot plant for Li-ion battery recycling at Salzgitter factory, south-west of Braunschweig, Germany. (Earlier post.) Batteries can be recycled here as early as 2020—initially 1,200 tons per year. This corresponds to 3,000 vehicle batteries.

A further increase in capacity is envisaged for subsequent years. However, large quantities of battery returns are not expected until the end of the 2020s in any case. That is when the first large proportion of e-vehicles (which will be sold in greater volumes starting in 2020) will have reached the end of their working life.

For ten years now, we have been researching how we can recuperate raw materials. These include, above all, cobalt, lithium, manganese, and nickel.

When an EV battery pack reaches its end of life, the battery will be analyzed and then either given a second-life application or be recycled.

One possible second life for batteries is as a component for flexible charging stations. These are quick charging stations which can be operated autonomously, for example at festivals or large-scale events.

Batteries that are not given a second life will be recycled by the staff in Salzgitter. In this process, the individual battery parts will first be shredded, then the material will be dried and sieved, allowing the employees to extract the so-called “black powder.” This contains the valuable raw materials of cobalt, lithium, manganese, and nickel. These materials then just have to be separated individually, after which they are available again for the production of new batteries. 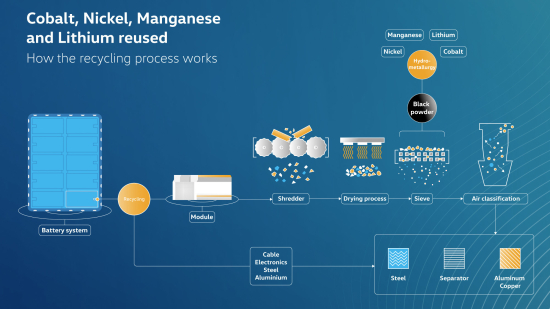 In parallel with its preparation for the production of the ID EVs, Volkswagen Group Components is also building a pilot plant for battery cell production at its plant in Salzgitter, together with the “Center of Excellence” for batteries.

We should implement a policy that companies address the whole lifecycle of products, from purchase to removal from the environment, including recycling if required. The costs to the company should include the whole lifecycle and require bonding to assure the product is removed.

It will eventually be cheaper to mine cobalt from old batteries than in the Congo.
As they point out, the problem is the timing of the availability of end of life batteries.
If you go too soon, you waste money with a plant with nothing to process.
If you go too late, you may miss up on process development IP.
Never simple, is it.

There are plenty of batteries in old electronics and other things.  Lead-acid batteries have the highest recycling rate of any product in the United States due to the refundable core charge, and things like laptop batteries are always wearing out and being replaced.  Properly captured, that could provide multiple streams of material for a pilot plant to recycle.  When the stockpile of batteries starts growing, you make expansion plans.

I wish there were more battery recycling opportunities; I've got a bunch of old cells lying around that I would rather recycle than dump in a landfill.