Audi unveiled the Q4 e-tron concept compact electric SUV at the Geneva Motor Show. The Audi Q4 e-tron concept gives an advance look at what will be the fifth series production electric vehicle that the manufacturer will introduce by the end of 2020. 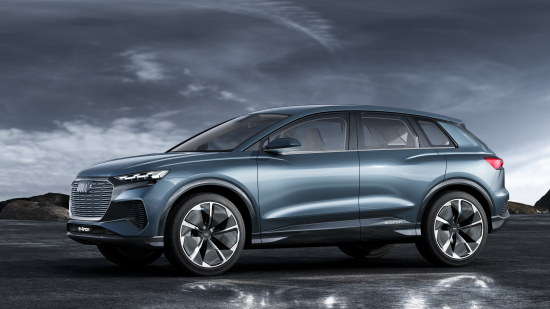 The Q4 e-tron concept is based on the modular electrification platform (MEB) that will be integrated in numerous electric vehicles produced by the Volkswagen Group in the future, from the compact class to the superior medium-size class. The MEB offers a broad range of drive variants and power levels; the performance version of the electric drive is installed in the Audi Q4 e-tron concept.

The front and rear axles are each powered by an electric motor—the Q4 is a quattro. There is no mechanical connection between the axles. Instead, an electronic control ensures that the torque distribution is coordinated optimally.

In most cases, the Audi Q4 e-tron concept mainly uses its rear electric motor, a permanently excited synchronous motor, in order to achieve the highest efficiency. For reasons of efficiency, the drive torque is generally distributed with a rear-axle bias.

If the driver demands more power than the rear electric motor can supply, the electric all-wheel drive uses the front asynchronous motor to redistribute the torque as required to the front axle. This also happens predictively even before slip occurs in icy conditions or when cornering fast, or if the car understeers or oversteers. 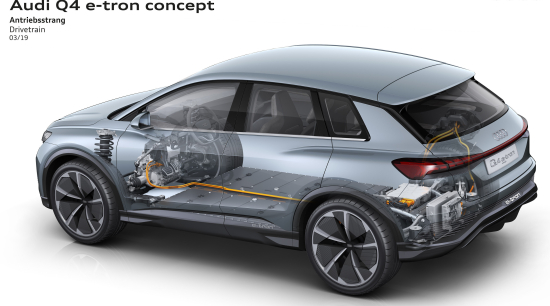 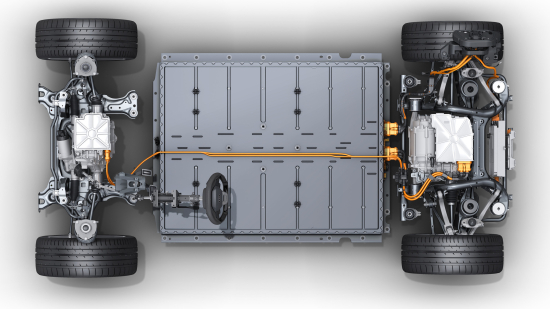 The battery in the vehicle floor stores 82 kWh, which allows for a range of more than 450 kilometers (280 miles) according to the WLTP standard. The battery is charged with a maximum of 125 kW. As a result, it can take hardly more than 30 minutes to return to 80% of the total capacity.

The battery system weighs 510 kilograms; the center of gravity of the Audi Q4 e-tron concept is therefore at a similar level to that of a sedan with a conventional drive system. Axle load distribution is perfectly balanced at almost 50:50.

From the low aerodynamic drag of the body, whose Cd value is 0.28, to the sophisticated recuperation strategy, the compact SUV uses every opportunity to optimize its range. The complex thermal management of the drive and battery, which involves a CO2 heat pump, also contributes to this. 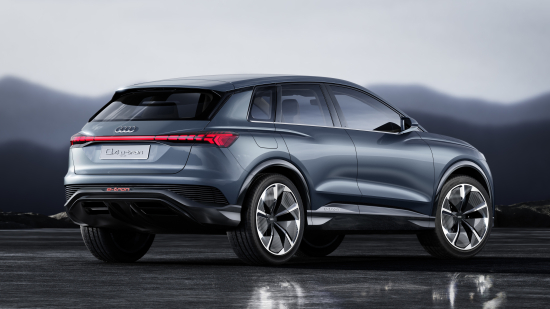 Compact on the outside, spacious on the inside: dimensions and interior 4.59 meters long, 1.90 meters wide, 1.61 meters tall: With its dimensions, the Audi Q4 e-tron concept takes its position in the upper third of the compact class. Its road space requirements thus qualify the electric SUV as an agile all-rounder that is suitable for city driving as well. In terms of the interior, by contrast, its wheelbase of 2.77 meters puts it at least one class higher. As there is no transmission tunnel restricting the space, the Q4 e-tron concept offers unsuspected spaciousness and comfort, especially in terms of legroom both at the front and in the rear.

The modular electrification platform MEB: the base. MLB, MQB – modular longitudinal platform and modular lateral platform: These component systems for vehicle development represent a great success story in all segments of Audi and the Volkswagen Group. Previous platforms were designed primarily for the use of combustion engines. The MEB was designed specifically and exclusively for automobiles with electric drive systems. Axles, drives, wheelbases and the interaction between all components are selected and adapted specifically for e-mobility. The placement of the large-volume battery units and their geometry can be optimized without having to make concessions to other drive concepts that must always be taken into account in the MLB and MQB.

At the same time, huge synergy potential can be opened up with the MEB. This platform serves as the basis primarily for electric cars in the high-volume A segment. It allows the best technology available to be developed jointly across brands and used in many different electric cars. In particular, the MEB also helps electric mobility to break through even in the particularly price-sensitive compact segment.

The Premium Platform Electric (PPE) is a special joint project of the development departments at Audi and Porsche. It will be the foundation for multiple Audi model families with all-electric drive covering the high-volume B through D segments.

Sales of the Audi e-tron have already started, and the first vehicles will be delivered to the customers before the end of March 2019. Later this year, the Audi e-tron Sportback will be presented, and the Audi Q2L e-tron, which was designed specifically for the Chinese market, will roll off the assembly line. The presentation of the production version of the four-door high-performance coupé Audi e-tron GT, which is being developed at Audi Sport GmbH, is planned for the second half of 2020. The compact Audi Q4 e-tron is to make its production debut at the same time. With this offer, Audi now covers all important market segments with all-electric drive vehicles, from the A segment to the full-size class, just under two years after the launch of the first electric car.