ExxonMobil and Chevron have separately announced plans for significant boosts in their production in the Permian Basin.

ExxonMobil has revised its Permian Basin growth plans to produce more than 1 million oil-equivalent barrels per day by as early as 2024—an increase of nearly 80% and a significant acceleration of value.

ExxonMobil. The size of the company’s resource base in the Permian is approximately 10 billion oil-equivalent barrels and is likely to grow further as analysis and development activities continue.

We’re increasingly confident about our Permian growth strategy due to our unique development plans. We will leverage our large, contiguous acreage position, our improved understanding of the resource and the full range of ExxonMobil’s capabilities in executing major projects.

Our plans are attractive at a range of prices and we expect them to drive more value as we continue to lower our development and production costs.

ExxonMobil expects its investments in the Permian Basin are expected to produce double-digit returns, even at low oil prices. At a $35 per barrel oil price, for example, Permian production will have an average return of more than 10%.

The anticipated increase in production will be supported by further evaluation of ExxonMobil’s Delaware Basin’s increased resource size, infrastructure development plans, and secured capacity to transport oil and gas to ExxonMobil’s Gulf Coast refineries and petrochemical operations through the Wink-to-Webster, Permian Highway and Double E pipelines.

Among the company’s key advantages in the Permian, is its acreage position. The company has large, contiguous acreage that enables multi-well pads in large development corridors connecting to efficient gathering systems, reducing development costs and accelerating production growth. ExxonMobil’s scale, financial capacity and technical capabilities enable the company to maximize the value of the resource.

ExxonMobil is actively building infrastructure to support volume growth. Plans include construction at 30 sites to enhance oil and gas processing, water handling and ensure takeaway capacity from the basin. Construction activities include central delivery facilities designed to handle up to 600,000 barrels of oil and 1 billion cubic feet of gas per day and enhanced water-handling capacity through 350 miles of already-constructed pipeline.

ExxonMobil remains one of the most active operators in the Permian Basin and has 48 drilling rigs currently in operation and plans to increase its rig count to approximately 55 by the end of the year.

Increased use of technology, including enhanced subsurface characterization, subsurface modeling and advanced data analytics to support optimization and automation, will help the company reduce costs, improve its development plan and increase resource recovery.

Chevron. Chevron has added almost 7 billion barrels of resource and doubled its portfolio value in the Permian over the past two years.

The company’s position in the Permian is characterized by long-held acreage, zero-to-low royalty on more than 80% of its land position, and minimal drilling commitments, said Jay Johnson, executive vice president, upstream.

These attributes together with the deployment of new technologies are driving higher returns, stronger cash flows, and increased value. 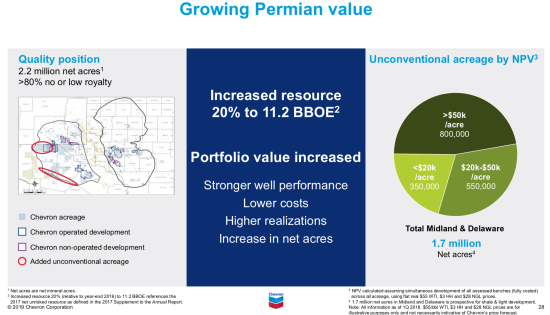