Mercedes-Benz unveiled the first purely battery-electric people mover in the premium segment at the Geneva Motor Show. Mercedes-Benz Vans plans to release a series-production vehicle on the basis of the Concept EQV, to be presented to the public at this year’s Frankfurt Autoshow. 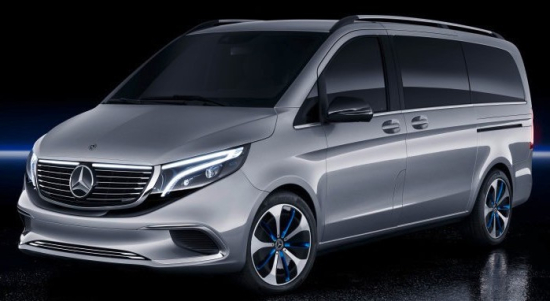 The Concept EQV is representative of the consistent development of the “EQ” technology brand. Mercedes-Benz founded the technology brand in 2016, kicking off with the “Concept EQ”. At the 2017 IAA, the “Concept EQA” followed in the compact segment. In September 2018, the brand presented its first series-production vehicle: the EQC electric drive SUV. The Concept EQV will expand the model range by a premium MPV for up to eight occupants.

The Concept EQV features a compact electric drivetrain (eATS) on the front axle with an output of 150 kW. The electric motor, the transmission with fixed transmission ratios, the cooling system and the power electronics form a compact and integral unit.

Energy is supplied by a 100 kWh lithium-ion battery pack. The concept vehicle can be charged at home using a Mercedes-Benz wallbox or a regular household plug socket. A rapid charging function enables the addition of energy for a range of around 100 kilometers within just fifteen minutes.

By installing the battery in the vehicle’s underfloor, the entire interior space is available without restriction. Thus, when equipped with six individual seats, for example, the Concept EQV makes for a representative shuttle vehicle which fulfills all of the requirements of VIP transport.

Further seating configurations make the vehicle a practical family companion about town as well as allowing for easy transport of sports and outdoor equipment. With the Concept EQV, Mercedes-Benz is offering an extremely flexible, fully-electric vehicle concept which can easily be converted to a 7 or even 8-seater with the addition of individual seats or seat benches.

There seems to be a market for transit vans and other similar models. Maybe people will even finally get into commuting car pools to reduce traffic, stress, pollution, costs and imported oil.