Audi is testing factory vehicles powered by used lithium-ion batteries at its main plant in Ingolstadt. Like all automobile manufacturers, Audi is obliged by law to take back energy carriers after they have been used in cars. Because they still have a large proportion of their original charging capacity, an interdisciplinary project team is now investigating how batteries from Audi e-tron test vehicles, for example, or from hybrid models such as the Audi A3 e-tron and Audi Q7 e-tron, can continue to be used sensibly. 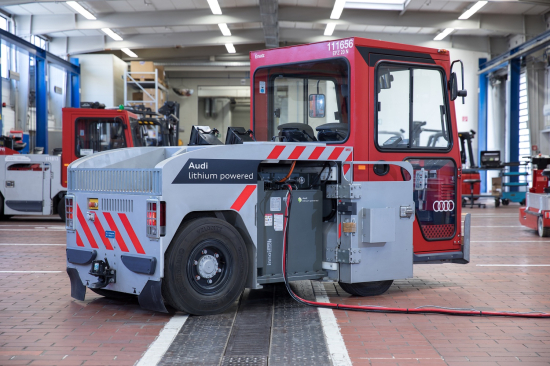 A number of other advantages have already become apparent during the test phase.

Factory vehicles in Audi’s production plants such as fork-lift trucks and tow tractors have so far been powered by lead-acid batteries. When the batteries are empty, employees remove the battery packs weighing up to two tons from the vehicles and connect them to a charging station for several hours.

However, lithium-ion batteries can be charged directly where the vehicles are parked during normal downtimes—in breaks between shifts for example. This saves space and also eliminates the high manual effort required to replace the batteries.

Audi calculates that it would save millions if it converted its entire fleet of factory vehicles to lithium-ion batteries at its 16 production sites worldwide.

Every lithium-ion battery represents high energy consumption and valuable resources that must be used in the best possible way. For us, a sustainable electric-mobility strategy also includes a sensible second-use concept for energy carriers.

—Peter Kössler, Member of the Board of Management for Production and Logistics at Audi AG

The remaining charging capacity of a lithium-ion battery after use in a car is more than sufficient for the requirements of the transport vehicles. Their driving characteristics actually improve considerably as a result of this use: They can keep their speed constant even on ramps—factory vehicles powered by lead-acid batteries cannot do that. In addition, regular charging during breaks prevents downtimes during working hours.

The battery of an Audi e-tron, for example, consists of 36 individual battery modules and is located under the car’s passenger cell between the axles in the form of a flat, wide block.

After batteries are taken back, the project team checks each individual module for its continued usability. They then install 24 modules in each new battery tray. This has the same dimensions and weight as the previous lead-acid batteries of the factory vehicles, so the company can continue to use all of those vehicles without any major investments. In the future, specialized employees could take over the assembly of the second-use batteries in the company’s own battery center.

The project team from the areas of production, logistics and development has been working on this second use of used battery modules for about two years. After the first tests were successful, they are now testing the first converted factory vehicles in everyday production.

It is also conceivable that used battery modules could be used in mobile charging containers for electric vehicles or in stationary energy-storage systems. Audi is also developing recycling concepts: At the end of the battery lifecycle, valuable elements from them are to flow into new products and will thus continue to be used.

Excellent idea.  When the battery is no longer capable of going 150 miles on a charge, putting it in a vehicle which travels maybe 150 miles in a week is a perfectly good way to get more value out of it.  And of course the batteries in forklifts and such are also part of the inventory of raw materials which can be recycled to new cells whenever the commodity prices make it attractive.

E-P:
Agree! These used batteries have also been proposed as behind the meter grid storage and that also makes sense.

Given the minuscule supply of batteries and the far more important task of replacing petroleum, price-arbitraging the electric grid is probably one of the last things we should be doing with these batteries.

If we need grid energy buffers we can use things like molten silicon heat storage to feed carbon-free heat to CCGTs in lieu of burning natural gas.  That would be the equivalent of a battery with a round-trip efficiency of about 62% and really cheap storage per kWh.  It would also be able to buffer very rapidly changing net demand because surplus power could be diverted to the silicon heat storage almost without practical limits; there's your fast-ramping generation and spinning reserve.  That's a much less resource-intensive way of meeting that particular need.