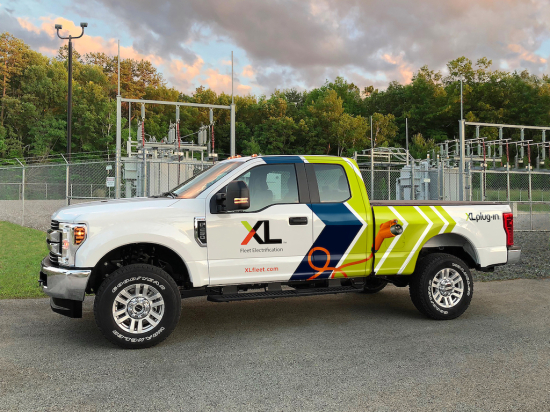 According to its initial assessment, XL is reporting that the XLP F-250 truck will provide up to a 50% improvement in miles driven per gallon (MPG) over conventional factory units, while reducing greenhouse gas (GHG) emissions by 33% during normal operation. These numbers are consistent with what the PHEV F-150 has been proven to achieve at EPA-certified testing facilities.

The XLP F-250 features a high voltage 15 kWh lithium-ion battery pack that is compatible with Level 1 and Level 2 charging stations using an industry-standard J1772 plug interface. The battery is also charged by regenerative braking during driving, which captures and stores energy while slowing the vehicle. The energy is then transferred back into the drivetrain through an electric motor which helps propel the vehicle during acceleration, reducing fuel consumption, CO2 emissions and brake wear.

The entire system weighs 750 pounds and is professionally mounted onto existing factory components. The XLP F-250 has no effect on Ford factory warranties, and requires no special maintenance procedures or charging infrastructure enhancements.

According to XL, the product is scheduled to begin shipping to customers before the end of 2019. The vehicle is on display this week at the NTEA Work Truck Show.

As I recall, XL's system parallels the OEM drivetrain and has no engine-off power capability.  This limits the possible improvement.

It would be nice to see Ford do a fully-integrated PHEV truck.