The Audi A3 Sportback g-tron is starting the new model year with a technology update. With an increased tank volume, the compact model can cover around 400 kilometers (248.5 miles) (WLTP cycle) in natural gas operation. 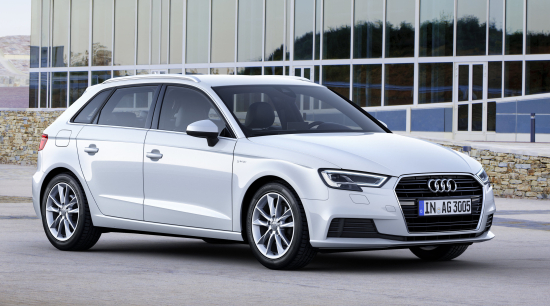 Presales at dealerships in Germany have begun, with a base price of €30,600.

Equipped with a new 1.5 TFSI engine producing 96 kW (131 metric hp), the A3 Sportback g-tron sets standards for efficiency and economy. To enable the four-cylinder engine to run on these fuels, Audi engineers modified its cylinder head, turbocharging, fuel injection system and catalytic converter.

Compared to gasoline, combustion of natural gas emits 25% less CO2 due to the lowest carbon content of all hydrocarbons. In addition, particulate emissions remain very low.

Just as before, there are two tanks made of glass fiber-reinforced polymer (GFRP/CFRP) beneath the luggage compartment floor of the five-door car, each of which hold roughly seven kilograms (15.4 lb) of gas. They reduce luggage space only marginally and are constructed from a composite material, making them very lightweight.

Using the specific benefits and dimensions of each of the two tank technologies to its advantage, the intelligent combination of GFRP tanks and the gas tank makes optimum use of the existing installation space. The gasoline tank, which now holds nine liters (2.4 US gal), provides the conventional mobility reserve.

The two plastic tanks storing the gas with an operating pressure of up to 200 bar follow the Audi lightweight design philosophy. Due to their layout, they weigh 66% less than comparable steel cylinders. Their inner layer is a gas-tight polyamide bladder.

Using GFRP not only improves stability, the composite material is also a reliable visual indicator of damage. Following an application of force from the outside—for example in the event of an accident—the color of the layer changes to a milky-white.

Before being installed in a car, each tank is subjected to a hydraulic test at 300 bar during production. The average burst pressure of 580 bar is far higher than this and exceeds the legal requirements of 470 bar by far.

The filler necks for gas and gasoline are located under a shared tank flap. Two indicators inform the driver about the fill levels of the tanks. The driver information system shows the fuel consumption in the active operating mode.

The Audi A3 Sportback g-tron arrives at the customer equipped with a seven-speed S tronic.

Audi may have missed a bet here.  There's considerable wasted space around cylindrical tanks.  Had those tanks been put INSIDE the gasoline tank, that space could have been also used for fuel storage.

What about safety with gaseous fuels? We just had another explosion of a biogas bus in Stockholm. Luckily, the bus had no passengers – this time. Buses usually do… With more and more road tunnels in the greater Stockholm area, even smaller accidents in tunnels could cause large catastrophes when gaseous-fueled vehicles are involved. Gaseous fuels could very quickly create an explosive mixture in a confined space, e.g. in a tunnel, and in an accident, there will always be an ignition source readily available.

Love how the vehicle was fully involved and not one piece of firefighting equipment in the frame.  It was almost like someone INTENDED to make a spectacle of the thing.

Could it be sabotage by e.g. Chinese trying to sell BYD buses?

It's too bad that the new third cylinder is steel rather than carbon fiber like the other two in the vehicle. There have been problems with their steel cylinders rusting and then failing on their other CNG cars. I would like to see VW use only carbon fiber cylinders through out their CNG line. It may cost a little more but it is worth avoiding any unwelcome surprises.