The ReactWell process is a research and development project involving a reaction that converts organic material to synthetic crude oil. It can be used by refineries to upgrade their feedstock or to convert biomass to oil.

ORNL’s method involves nanofabrication and catalysis science, using tiny spikes of carbon and copper to turn the greenhouse gas into a sustainable liquid.

Our team’s process is complementary to other refining techniques by providing a means to recycle carbon dioxide that would otherwise be released. Additionally, it can operate as a dispatchable load, which may match the intermittency of renewable sources such as wind and solar. 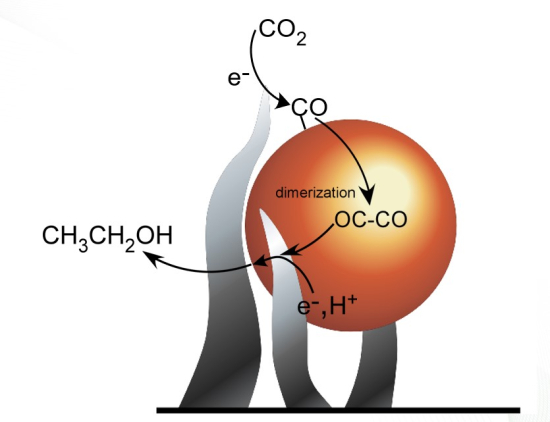 Any operation that produces a carbon dioxide byproduct can benefit. For example, ORNL’s catalyst works in a single step; when incorporated into the ReactWell process, it would remove a refinery’s need to purchase additional hydrogen from a pipeline or produce additional hydrogen using steam methane reforming or electrolysis via electrolyzers.

Running reactions in a single step without the prerequisite of generating hydrogen—having the ability to run water directly—is a very novel platform.

The one-step reaction could result in a significant savings on a site’s upfront capital investment and long-term operating costs.

In contrast with competing processes, the ORNL catalyst uses no rare earth elements, which are expensive and can be difficult to acquire.

The reactions we have done in the past have worked well, but the catalyst and building costs in certain applications are high, and the payback periods are long. Because the ORNL method is copper- and carbon-based, it will help to minimize the payback period for an attractive return on capital.

Rondinone and colleagues are conducting studies to understand and improve efficiency limits, lifetime limits and poisoning tolerance. They have demonstrated that the carbon nanospikes are electrochemically stable for at least 300 hours and can be grown on a variety of substrates across wide areas.

The original research was funded by DOE’s Office of Science and used resources at the ORNL’s Center for Nanophase Materials Sciences, which is a DOE Office of Science User Facility. Additional funding was provided by ORNL’s Technology Innovation Program.

ReactWell’s license of ORNL’s electrochemical process is limited to the conversion of carbon dioxide to ethanol.

The ORNL process is only about 75% selective for CO2 reduction; the remainder of the electrons go to H2O splitting.  In a refinery context all of the products (EtOH, CH4, CO, H2) are useful.  H2 is directly useful, CH4 and CO can be fed into various stages of the existing SMR process to produce more H2 (with the CO2 recycled to the ORNL process), and the EtOH is a blendstock.

There would appear to be plenty of potential outside of refineries, but dealing with the gaseous byproducts requires different approaches.  CH4 can be sent to the natural gas pipeline system or stored in existing wells.  CO is a poison but it can be methanated using the H2.  Excess H2 can be blended into the natural gas stream up to a point, but it would probably be best to methanate it using additional CO2 in order to avoid issues with leakage and hydrogen embrittlement.

My question would be if this has any reasonable chance of being cheaper than converting CO2 plus solar to corn or grass and then using fermentation to make ethanol. I would guess not

It depends on the cost of CO2.  I'm going to have to dig into the details of this process sooner or later, probably sooner.  It's going to begin with the definition of "faradaiac efficiency" (a Faraday is a mole of electrons, some large number of Coulombs) and exactly what this means in terms of the product mix:  does 63% EtOH efficiency mean 63% of the moles of product or 63% of the input electrons go to making that product?  Also, how much overpotential does -1.2 volts represent and what's the overall energy efficiency?

Last, what is the operating temperature of the electrolysis cell?  If it's 100 C or more, then the waste heat might be used to drive the cracking of bicarbonate to carbonate and free CO2 and supply the energy for carbon capture as well.

Thanks for the chemistry lesson.

My analysis of the ORNL electrolytic ethanol process is up:

Summary:  energy losses are high, but might be useful for managing the worst traits of "renewables".