New research led by a team from the Department of Energy’s Lawrence Berkeley National Laboratory (Berkeley Lab) uncovers how a beneficial insect common to the Eastern US, the long-horned passalid beetle (Odontotaenius disjunctus), has a hardy digestive tract with microbes to thank for turning its woody diet into energy, food for its young, and nutrients for forest growth.

These insights into how the beetle and its distinct microbiome have co-evolved provide a roadmap for the production of affordable, nature-derived fuels and bioproducts. A paper on the study is published in the journal Nature Microbiology.

We found that the beetle’s gut is structured to allow unique microbial communities to coexist, allowing each to perform the distinct specific metabolic processes needed to efficiently extract energy from wood. The energy derived from the wood allows the beetle to sustain itself and its offspring on an otherwise very poor diet.

In forests throughout the world, coarse woody debris makes up a tremendous amount of biomass that is tough, hard-to-decompose, and nutritionally bankrupt due to its low nitrogen content. For insects such as termites and the passalid beetle, decaying wood is the main dietary staple from which they derive energy and nutrients to make their cells and tissues. An adult passalid burrows its one-inch body through decayed wood that has been pre-processed by fungi, speeding up wood decomposition through its feeding activity and making the wood and carbon accessible for other organisms in the ecosystem.

Passalid colonies may have as many as seven adults that can consume over four times their weight in wood per day. This wood passes through the beetle’s complex digestive tract and is finally excreted as its waste product, politely termed frass.

Understanding how the gut microbiome populations interact to deconstruct lignocellulosic materials to sugars or potential biofuels such as hydrogen and methane could potentially aid in the optimization of industrial cellulosic degradation.

The beetle processes large amounts of woody biomass and has developed symbiotic relationships with gut microbes to survive on a low-nutrient diet. The microbial community in the beetle’s gut provides digestive enzymes that degrade complex polysaccharides and lignin of plant cells. Physically, the gut is highly compartmentalized, resulting in a segmentation of microbial populations and the processes for energy extraction from lignocellulose. 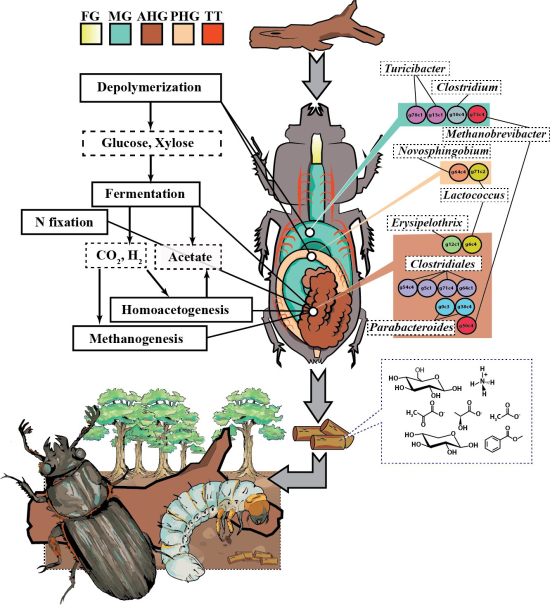 A close-up look at the passalid beetle’s compartmentalized gut, and the distribution of metabolic processes and microbial composition by compartment. In the midgut (MG), plant polymers are changed into simpler components, which are then fermented in the anterior hindgut (AHG), where nitrogen is fixed and methane and hydrogen produced. Transformation of plant biomass (or polymers again) continues in the posterior hindgut (PHG), up to the release of frass rich in nutrients and metabolites such as acetate, ethanol, and benzoate. (Credit: Javier Ceja-Navarro/Berkeley Lab)

To understand the complex connections that make up the O. disjunctus digestive system, the team defined the environment in which these organisms interact, identified the location of key species and their genomes, and confirmed the metabolic pathways contributing to their efficient metabolism of lignocellulosic material.

Breaking down lignin and cellulose to make fuel (sugars etc.) is chemically very difficult, as is fermenting it into a usable reduced product (like acetate, methane or hydrogen). The beetle can’t do this on its own. It needs a diverse group of bacteria and other microbes in its gut to help. The spatial stratification in the beetle’s gut allows for different microenvironments—some are more acidic, some more anaerobic. Each appears to have a community that sequentially degrades the wood substrates and extracts energy, sharing some products with the beetle host.

This allows oxygen-requiring reactions to happen in a gut region that is separated from regions where microbes carry out reactions that would be inhibited by oxygen. The team also demonstrated that the beetle gut architecture prevents certain products like hydrogen from escaping in order to favor the production of acetate, a critical energy source not only for the beetle itself, but also for its offspring.

We study them because they are a natural model biorefinery. Understanding how evolution has solved the complex lignocellulose to fuel conversation process can help us design better industrial mimics and find novel enzymes or pathways.

These passalid beetle gut communities represent an excellent model system for determining how microbial communities assemble and partition processes along physicochemical gradients to yield an efficient system that converts lignocelluloses into hydrogen, methane, ethanol and other bioenergy-relevant products. 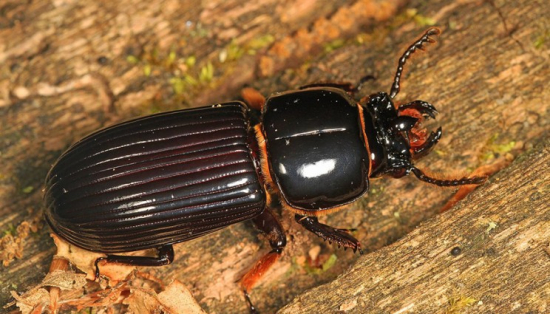 They can probably eat Norwegian wood.

According to Paul:
"It was pine really, cheap pine. "
https://www.beatlesbible.com/songs/norwegian-wood-this-bird-has-flown/