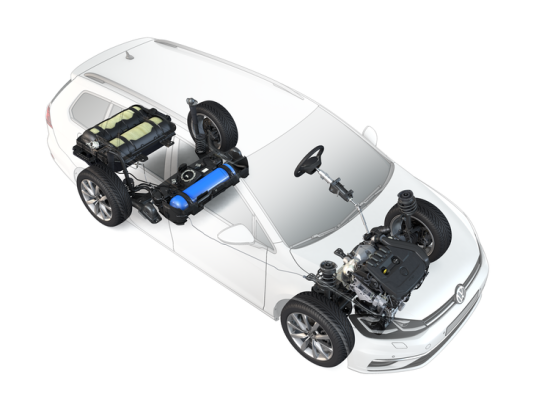 The natural gas tanks are integrated as a space-saving underfloor solution. At the same time, the additional tank increases the range in natural gas mode by up to 80 kilometers compared to its predecessor.

An overhauled, powerful 1.5-liter four-cylinder engine with 96 kW (130 hp). This engine is primarily powered with compressed natural gas (CNG)—the gasoline tank is smaller as a result and thus only serves as a backup.

Due to the TGI Miller combustion process and the variable turbine geometry (VTG) of the turbocharger, the Golf Variant TGI’s 1.5-liter four-cylinder gasoline engine is even more efficient and responsive than its predecessor. It delivers 96 kW (130 PS) and a torque of 200 N·m.

With the gasoline tank reduced in size to 9 liters (for a Golf Variant TGI, that corresponds to a range of approximately 200 kilometers) and now serving merely as a backup, this is referred to as a quasi-monovalent drive concept. In other words, the range with natural gas alone has increased by around 80 kilometers, enabling routes of up to 440 kilometers (based on WLTP) with natural gas alone.

The three natural gas tanks have a combined volume of 115 liters, which corresponds to a total weight of 18.3 kilograms. The tanks are made from carbon fibre-reinforced plastic (CFRP) or from metal.

The CO2 emissions of a natural gas vehicle are much lower than those of a comparable vehicle with a conventional engine, as combustion of compressed natural gas (CNG) releases around 25% less CO2 than combustion of gasoline.

The reason for this is the low percentage of carbon in natural gas. Due in part to the innovative lambda split process, natural gas also burns extremely cleanly: the exhaust contains much less carbon monoxide and nitrogen oxide (NOx), resulting in minimal soot and fine dust.

Biomethane or e-gas can minimize emissions even further, as biomethane is derived from residual plant matter, and e-gas from excess green energy (power to gas). Both can be added to fuels or are available as pure biofuels.

In Germany, the number of natural gas vehicles is expected to reach one million by 2025, with some 100,000 natural gas vehicles already registered. For this to work, the product portfolio needs to be expanded and the network of filling stations in Europe increased to 2,000—also by 2025.

There are substantial stretches of the US where CNG is not available, and vehicles like the Honda Civic GX simply could not go.  The gasoline backup of the Golf would allow (slightly complicated) travel in these areas.

I'd like to see more of this, because natural gas is very cheap in N. America and it makes no sense to run vehicles on petroleum when NG is a cheaper and cleaner fuel in most ways (save for the GWP impact of methane leakage).

NG is cheap in many countries in Europe simply because the tax is lower than for gasoline and diesel.

It's great that they are using carbon fiber reinforced cylinders for the rear two tanks. I am confused why they haven't used the same for the additional third cylinder. In the past there has been some problems with rust causing failures in the steel versions.

NG is cheap in N. America. However the environmental cost of fracking is still a factor. For a similar price point Bio methane produced from sewage solids and agricultural waist could be produced in N. America as it is in Scandinavia, thus avoiding the numerous problems of fracking.
We fill up our car weekly with Bio methane (biogas) produced locally by Vafabmiljo. We are saving a lot of money while being socially and environmentally conscience.

NG is a great value!! Dual fuel makes it very practical. Hope this comes at a price point where it really catches on.

CNG/LNG vehicles could have eliminated N. American crude oil imports some years ago, and given world crude prices another kick downward.  The failure of the transport industry to capitalize on this proves that the oil lobby in the USA remains very strong.