A Stanford-led team has developed a new electrolysis system to split seawater in hydrogen and oxygen. Their findings are published in an open-access paper in the Proceedings of the National Academy of Sciences. Existing water-splitting methods rely on highly purified water—a precious resource and costly to produce. 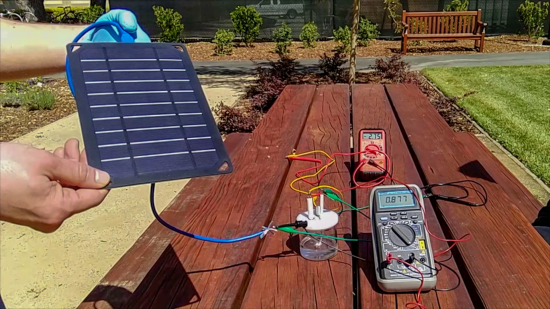 Hongjie Dai and his research lab at Stanford University have developed a prototype that can generate hydrogen fuel from seawater. (Image credit: Courtesy of H. Dai, Yun Kuang, Michael Kenney)

Electrolysis of water to generate hydrogen fuel is an attractive renewable energy storage technology. However, grid-scale freshwater electrolysis would put a heavy strain on vital water resources. Developing cheap electrocatalysts and electrodes that can sustain seawater splitting without chloride corrosion could address the water scarcity issue.

A continuous, highly oxygen evolution reaction-active NiFe electrocatalyst layer drawing anodic currents toward water oxidation and an in situ-generated polyatomic sulfate and carbonate-rich passivating layers formed in the anode are responsible for chloride repelling and superior corrosion resistance of the salty-water-splitting anode.

Theoretically, to power cities and cars, you need so much hydrogen it is not conceivable to use purified water, said Hongjie Dai, J.G. Jackson and C.J. Wood professor in chemistry in Stanford’s School of Humanities and Sciences and co-senior author on the paper.

Dai said his lab showed proof-of-concept with a demo, but the researchers will leave it up to manufacturers to scale and mass produce the design.

Water splitting with electricity—electrolysis—is a simple and old idea: a power source connects to two electrodes placed in water. Negatively charged chloride in seawater salt can corrode the anode, however, limiting the system’s lifespan. Dai and his team wanted to find a way to stop those seawater components from breaking down the submerged anodes.

The researchers discovered that if they coated the anode with layers that were rich in negative charges, the layers repelled chloride and slowed down the decay of the underlying metal.

Without the negatively charged coating, the anode only works for around 12 hours in seawater, according to Michael Kenney, a graduate student in the Dai lab and co-lead author on the paper.

The whole electrode falls apart into a crumble. But with this layer, it is able to go more than a thousand hours.

Previous studies attempting to split seawater for hydrogen fuel had run low amounts of electric current, because corrosion occurs at higher currents. But Dai, Kenney and their colleagues were able to conduct up to 10 times more electricity through their multi-layer device, which helps it generate hydrogen from seawater at a faster rate.

I think we set a record on the current to split seawater.

The team members conducted most of their tests in controlled laboratory conditions, where they could regulate the amount of electricity entering the system. But they also designed a solar-powered demonstration machine that produced hydrogen and oxygen gas from seawater collected from San Francisco Bay.

Without the risk of corrosion from salts, the device matched current technologies that use purified water.

The technology could be used for purposes beyond generating energy. Since the process also produces breathable oxygen, divers or submarines could bring devices into the ocean and generate oxygen down below without having to surface for air.

Interesting development for near future massive production of clean H2 and Oxygen with Sunshine and Sea water? The 40% to 50% living close to unlimited sea water could eventually benefit?

Could a reverse process be used to produce clean drinking water?

The process of reclaiming water is well known and has many paths to follow. As an aside; some believe osmosis using graphene as a filter represents a promising process for the future.
In any case why not filter the water first and deal with the products which are in solid and liquid stable forms; then run the electrolysis process using clean water to create the hydrogen rather than running the electrolysis process with elemental contaminated salt water and then dealing with the poison gas(cl2) and toxics byproducts.