Following about two and a half years of development and some 1,000 hours of dynamometer testing, the new Audi race engine is ready for its first racing deployment on 4 May at the Hockenheimring. 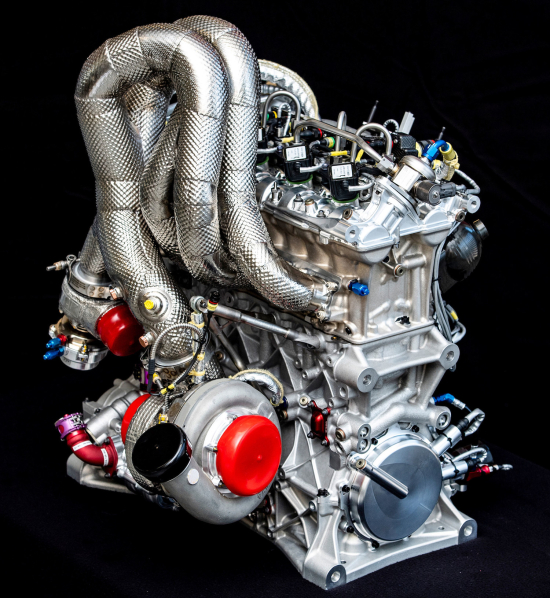 The move from the naturally aspirated V8 to the turbo engine is not only important due to the additional output of some 100 horsepower. In the DTM, we’re now driving with a high-efficiency engine of the type we’re also using in many production vehicles of the Group.

The new Class 1 Regulations of the DTM are geared to utmost efficiency. Just like in production, the challenge is to extract the maximum from the available fuel through high compression and very good efficiency. In the DTM, the amount of fuel is limited to 95 kilograms per hour.

That may sound like a lot but, in view of more than 610 horsepower, it really isn’t. The specific consumption of the DTM engine is extremely low and now within ranges that used to be typical for diesel engines. In terms of weight and lightweight design—especially in the context of avoiding CO2 emissions—we’re pointing out a few approaches that will hopefully find their way into future road-going vehicles—like in the case of the first TFSI for Le Mans and the TDI.

The compact four-cylinder turbo engine with gasoline direct injection (TFSI) only weighs 85 kilograms and thus only half as much as the naturally aspirated V8 engine that was previously used in the DTM. As a result, the dry weight of the Audi RS 5 DTM has dropped to less than 1,000 kilograms. The power-to-weight ratio is now about 1.6 kilograms per horsepower. 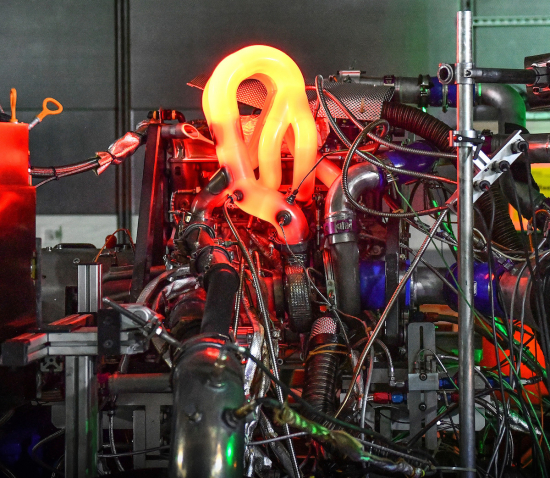 As in the past, a DTM engine has to last for a full season, so it is designed to run for some 6,000 kilometers.

The format of the DTM is a great challenge. The long mileage, distributed to many events with short runs, is really tough. Plus, the four-cylinder engine’s vibration behavior totally differs from that of the V8. That posed a huge challenge during the development of the engine and also to our dynamometers.

Additional output of more than 100 horsepower, as well as higher torque, put a greater load on the entire powertrain.

Due to a “push-to-pass” system, the driver can use a short-term engine power boost by pushing a button, for instance in an overtaking maneuver. Via a bypass of the fuel flow restrictor (FFR), an additional 5 kg of fuel per hour is provided, which results in a boost of about 30 horsepower.

The DTM races with standard filling station fuel (RON 98), which is conducive to the technology transfer from motorsport to production. In addition, the engine is ready for the use of alternative fuels (e-fuels) enabling extremely eco-friendly operation of high-efficiency internal combustion engines.

High efficiency and low fuel consumption are crucial factors of success in the DTM: competitors who are able to start with less fuel in their fuel cells and thus less weight than their rivals automatically have an advantage.

Audi has ample experience with turbo engines in motorsport, from the legendary original quattro through to the successful Le Mans prototypes. Based on this experience, each of the roughly 2,000 components of the DTM engine was designed from scratch.

The compact inline four-cylinder front engine is longitudinally mounted in the Audi RS 5 DTM. The turbocharger that operates with a maximum absolute pressure of 3.5 bar sits on the right-hand side of the car and is kept spinning by means of an anti-lag system (ALS) even when the driver’s foot is not on the accelerator pedal. 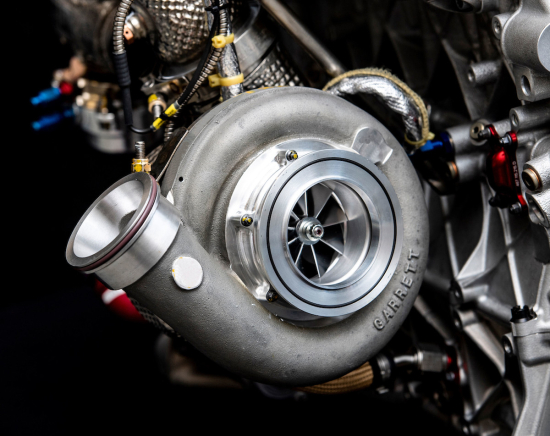 Impressive as this seems, we should recall that BMW squeezed out close to 1000 hp in race trim and around 1500 hp in qualifying (contemporary test benches did not cope with more, so the higher figure is an estimate) from their 1.5-liter 4-cylinder formula 1 engines. Of, course the qualifying version did not last much more than one lap. In addition, we should note that the regulations are different for race cars but nevertheless, an incredible power density is possible with no limits on turbocharging.

@gryf
BMW had a 4-cylinder engine but more cylinders will give more power also for a turbocharged engine, albeit not quite as decisive as it is for naturally aspirated engines. Thus, I wanted to give an apples-to-apples comparison with the Audi engine. It is quite clear that the 6-cylinder engines of TAG Porsche and Honda had more potential when it comes to power than the BMW engine. This was also obvious when looking at the podium results in the later years of the turbo era. Please also note that the BMW engine used a stock engine block, which is remarkable. After its championship win, the BMW engine was hanging in for a few more years, but it was not as competitive any more. Nevertheless, the comparison between BMW and Audi is interesting, just because of the number of cylinders, relatively similar cylinder capacity. With multiple turbos, two-stage charging with intercooling and aftercooling, and the fact that cylinders in groups of 3 is advantageous for turbocharging, we could imagine that a V12 1.5-liter Formula 1 engine with those features would have been even more powerful. Of course, it would not have been easy to integrate in the chassis. Imagine a something like jet engine with a high-pressure piston engine combustion chamber riding piggy back on it. Fuel efficiency would, of course, suffer for such extreme engines. Alfa did an effort with a V8 but they did not have the resources and probably started too late to become really competitive. By then, the new fuel regulation limited the amount of fuel, which favored engines with fewer cylinders, and this must have hit the Alfa engine pretty hard. And, as indicated, a V8 engine has a couple of drawbacks when it comes to turbocharging, although packaging in the chassis might be a little simpler than for a V12. With changes in the rules, we do not really know the true potential of the most extreme engines.

We should also recall that engines during the first turbo era did not run on conventional gasoline. They used chemicals that had little in common with gasoline and the fuel was supplied by chemical companies as, e.g. BASF.

The claim of 50% for the Mercedes F1 engine refers to thermal efficiency; not total efficiency. It does not take, e.g. air exchange and friction losses into account. I would also imagine that the pumping work could even be positive with the hybrid turbocharging they use for some engine operating conditions. I would love to see a comprehensive technical paper on efficiency with this engine, but I presume it will not come (if ever…) until after the current era. Nevertheless, a compact (downsized) and efficient turbocharged using some of these features might take fuel efficiency to a whole new level, even compared to the current leader Toyota Prius, while also providing a fun-to-drive factor not really associated with the Prius. However, with the current focus only on electrical drive, we might never know the true potential; as with the first turbo era F1 engines and advanced diesel engines in hybridized drivetrains for passenger cars.

Efficiency is all very well, but efficiency at 610Hp is of limited use.
Cars that run at 100Hp are more like what we should be aiming for.
- or even less.
My first car (1983 Ford Fiesta Mk2) had 45 hp and was able to perform any journey.
You wouldn't impress anyone with it, but it worked fine.

The video of the glowing manifolds is pretty cool though.

@Peter_XX
Having followed Formula One for almost 60 years I am well aware of the history of the 1980s BMW Turbo F1. This cast iron rocket is unique to motorsports with up to 5.5 bar boost in qualifying and burning gelled toluene (legal at that time). It was a beast to drive due to extreme turbo lag which is proof of Nelson Piquet's driving skill.
The use of two turbochargers on the V6 engines probably had more benefits than the two extra cylinders particularly concerning turbo lag.
@mahonj
Audi is probably using something like the Mahle Tubulent Jet Ignition (reference: https://www.greencarcongress.com/2016/07/20160711-mahle.html) originally developed by Cosworth and used in some form by all F1 engines. So some of this racing tech we hope will filter down to normal automotive engines.

Before leaving this subject we should also give credit to the outstanding 1980s 4 cylinder tech of the Lancia Delta S4 Rally car (sort of based on a production car) which combined a supercharger and a turbocharger to produce up to 1000 hp @ 5 bar boost. Audi has explored this tech as well in the form of e-superchargers.

@ All you motor heads. I love the glowing manifolds also. I have just started to learn about the TJI engines, but they seem very similar in effect to old prechamber diesels. The 18 race DTM requirement is interesting and very worthwhile for tech transfer. These one lap engines do not have any foreseeable linkage to the real world. I think the Skyactive-X (although less proven) is as good or better on BTE as the Prius isn't it? Certainly will be more fun to drive and overall much less complex an the total drive train level.

I fully agree that the rush to what to often appears to be EV religion is likely to leave some very good tech undeveloped. If the best combined cycle power plants are at ~60% before any grid and drive train losses then it seems there is less than a ~15% penalty from this to the best ICE in automotive. If this is not a completely unfair/inaccurate simplification why are there so many CO2 preachers hating on the future of ICE?