Scientists in China have developed a process for converting cellulose from plant waste from agriculture and timber harvesting into high-density aviation fuel: a polycycloalkane mixture. Tuning the reaction conditions also permits the selective production of methyl cyclopentane, which can be used as high-octane-number gasoline additive. 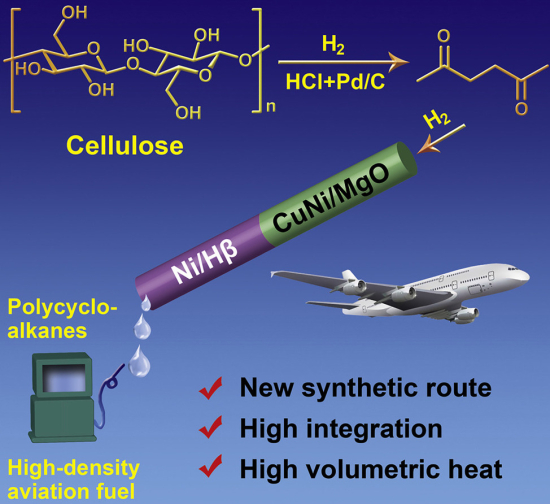 The researchers suggest that their new process offers many advantages, including the use of cheaper feedstock, mild reaction conditions, fewer steps, higher density, and a lower freezing point of final products. An open-access paper on their work is published in the journal Joule.

While chain alkanes (such as branched octane, dodecane, and hexadecane) have previously been derived from cellulose for use in jet fuel, the researchers believe this is the first study to produce more complex polycycloalkane compounds that can be used as high-density aviation fuel.

Ning Li, a research scientist at the Dalian Institute of Chemical Physics and an author of the study, believes this new biofuel could be instrumental in helping aviation “go green.”

Our biofuel is important for mitigating CO2 emissions because it is derived from biomass and it has higher density (or volumetric heat values) compared with conventional aviation fuels. As we know, the utilization of high-density aviation fuel can significantly increase the range and payload of aircraft without changing the volume of oil in the tank.

This resulted in a 71% isolated carbon yield—a 5% increase from the product yield in their initial work. Finally, they reacted hydrogen with the 2,5-hexanedione from wheatgrass cellulose to obtain the final product: a mixture of C12 and C18 polycycloalkanes with a low freezing point and a density about 10% higher than that of conventional jet fuels.

Although the researchers produced the biofuel at a laboratory scale in this study, Li and his team believe the process' cheap, abundant cellulose feedstock, fewer production steps, and lower energy cost and consumption mean it will soon be ready for commercial use. They also predict it will yield higher profits than conventional aviation fuel production because it requires lower costs to produce a higher-density fuel.

The biggest issue holding the process back is its use of dichloromethane to break down cellulose into 2,5-hexanedione; the compound is traditionally used as a solvent in paint removers and is considered an environmental and health hazard.

In the future, we will go on to explore the environmentally friendly and renewable organic solvent that can replace the dichloromethane used in the hydrogenolysis of cellulose to 2,5-hexanedione. At the same time, we will study the application of 2,5-hexanedione in the synthesis of other fuels and value-added chemicals.

Some would say if it can't do it all...forget it.