Hyster to develop fuel-cell electric reachstacker for Port of Valencia

Hyster Europe is developing a zero-emission reachstacker featuring a hydrogen fuel cell for the Port of Valencia, as part of the European Horizon 2020 program and H2Ports project. The port will be the first in Europe to incorporate hydrogen energy in its operations. 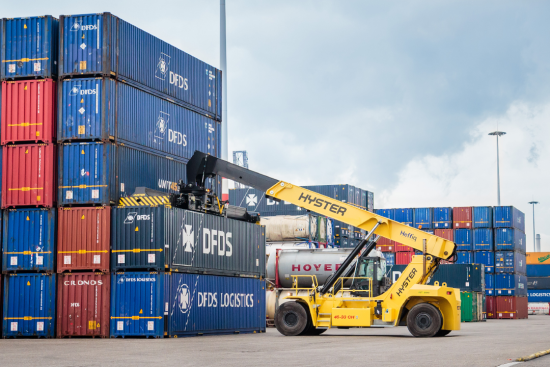 A conventional Hyster Reachstacker in operation.

An on-board hydrogen fuel cell will charge the battery on the forthcoming fully electric Hyster ReachStacker. The technology will help evolve this industry into a low carbon and zero-emission sector.

The demonstration site for the H2Ports project will be the MSC Terminal Valencia (MSCTV) in Spain, that can receive today’s biggest container ships and has 260,000 m2 of container stacking space. The reachstacker is expected to enter operation in 2021, where it will undergo thorough testing handling laden shipping containers alongside several existing reachstackers.

Conventional Hyster Reachstackers are powered by a Cummins diesel engine. In addition to the Cummins engine technologies, Hyster has also introduced new performance optimization developments such as cooling on demand, load sensing hydraulics (power on demand), RPM management and alternate engine idle speed to help further reduce the total fuel consumption of these reach stackers in most applications.

Noise levels will be low, and users can expect a reduction in energy costs. The company also expects reduced vehicle maintenance costs thanks to the elimination of the engine, transmission and other mechanical-driven components.

The project has received funding from the Fuel Cells and Hydrogen Joint undertaking (FCHJU) which also includes the development of an electric yard tractor and the installation of a mobile hydrogen supply station.

The H2Ports project follows a similar development in the Port of Los Angeles and the electrification of a Hyster laden container handler powered by a Nuvera fuel cell engine.

The intersection of electrification and hydraulics has great potential for reducing system losses.  Conventional hydraulic systems have pumps which are always in operation, circulating fluid.  When pressure is required, valves restrict the flow.  Partial restriction turns all the energy (pressure * volume) in the bypassed fluid into heat, and rate of operation is limited by the capacity of the pumps (some pumps are variable displacement but most are fixed displacement).

An electrified hydraulic pump can potentially operate at any speed from zero to maximum.  Thus, there is likely no need to operate with a partial flow restriction; all flow can be routed to the active hydraulic cylinder(s) and the pump supplies only the required amount of fluid.  When no flow is required, the pump can be stopped.  This radically reduces the losses in the hydraulic system and saves quite a bit of energy.

Presumably there are (could be) e wheel motors, various servos as well as matched and close coupled pumps to the hydraulic rams.

Hyster bought Nuvera fuel cells a while back.

Presumably there are (could be) e wheel motors

It is fairly easy to provide a motor per wheel.  The EV1 did it 23 years ago.

Quite common.  Robotics now typically uses one motor per axis per joint, with power two orders of magnitude less than a LDV wheel takes.

as well as matched and close coupled pumps to the hydraulic rams.

Yup.  If you need force multiplication and ballscrews won't do due to fretting, electrohydraulics are still the go-to technology.

Hyster is on the right track.  Maybe they are first and are a good investment opportunity.  That bears investigation.