The European Parliament, Council and Commission (the EU institutions) reached a provisional political agreement on the revised General Safety Regulation. As of 2022 a suite of 15 new safety technologies will become mandatory in European vehicles to protect passengers, pedestrians and cyclists. The European Commission expects that the proposed measures will help save more than 25,000 lives and avoid at least 140,000 serious injuries by 2038.

The new mandatory safety features include: 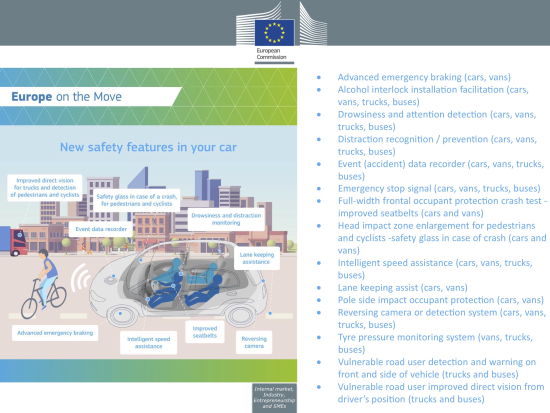 In addition to protecting people on European roads, the EC suggests, the new advanced safety features will help drivers get gradually used to the new driving assistance. Increasing degrees of automation offer significant potential to compensate for human errors and offer new mobility solutions for the elderly and physically impaired. All this should enhance public trust and acceptance of automated cars, supporting the transition towards autonomous driving.

Next steps. The political agreement reached by the European Parliament, Council and Commission in the trilogue negotiations is now subject to formal approval by the European Parliament and Council.The new safety features will become mandatory from 2022, with the exception of direct vision for trucks and buses and enlarged head impact zone on cars and vans, which will follow later due to the necessary structural design changes.

Background. In recent years, the EU has introduced a range of mandatory measures, which contributed to an estimated reduction of 50,000 fatal traffic casualties per year. These measures include electronic stability control systems on all vehicles, as well as advanced emergency braking systems and lane departure warning systems on trucks and buses.

The Commission also presented a Communication on Connected and Automated Mobility to make Europe a world leader for autonomous and safe mobility systems. As a first deliverable for connected mobility the Commission had adopted new rules that step up the deployment of Cooperative Intelligent Transport Systems (C-ITS) on Europe's roads. C-ITS allow vehicles to talk to each other, to the road infrastructure, and to other road users.

This could be a good step towards increased road safety & reduced accidents and fatalities.

More could be done to keep impaired and reckless drivers from using a vehicle on public roads.