LL was established in 2013 after developing an entirely new methodology in the construction of electric motor and generator technologies that create more power while using less energy. The Linear Labs motor is characterized by two main attributes: (1) very high torque starting at low speeds, and (2) high efficiency throughout the speed range.

Automotive manufacturers are already looking at HET technology as the solution to size, weight and range constraints. With 45 percent of worldwide electricity consumption passing through an electric motor, the number of industries this technology could impact are endless.

Linear Labs’ HET uses multiple rotors in new ways and that have the ability to adapt to conditions while in motion. Compared to the top permanent magnet motor on the market, it produces two times the torque density, three times the power density, two times the output per given motor size and minimum 10% more range, the company claims. 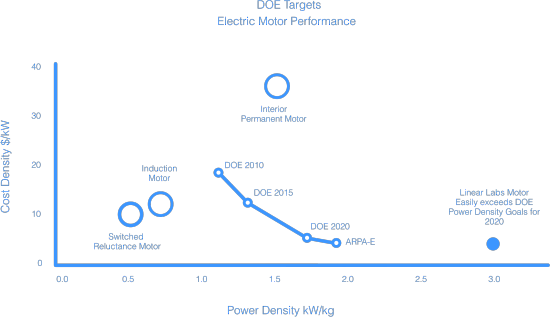 The HET is suited for mobility applications to include electric vehicles, offering high levels of torque that remove the need for a gearbox, reducing manufacturers’ production costs and increasing efficiency throughout the speed range. Linear Labs currently has 50 filed patents, 21 of which are issued with 29 patents pending.

Linear Labs was founded in 2014 in Texas by Brad and Fred Hunstable. Brad Hunstable is former CEO and Founder of Ustream, a pioneering live-video streaming service that sold to IBM in 2016 for $150 million. Fred Hunstable is an expert in electrical engineering and nuclear power, who led Ebasco and Walker Engineering’s efforts in designing, upgrading and completing electrical infrastructure, environmental and enterprise projects as well as safety and commercial grade evaluation programs.

Brad and Fred Hunstable invented the HET while working to design a device capable of pumping clean water and providing power for small communities in underdeveloped regions of the world. Numerous discoveries morphed into a new electric motor.

The holy grail in electric motors has always been high torque and no gearbox, and the HET achieves both in a smaller, lighter and more efficient package that is more powerful than traditional motors.

Headquartered in Fort Worth, Texas, Linear Labs has made recent additions its leadership team including President John Curry, coming from KLA-Tencor and NanoPhotonics, and Vice President Jon Hurry, who brings expertise as a technical representative for both Tesla and Faraday Future as well as a background with General Motor’s hydrogen fuel cell program in addition to experience with Lucid Motors.

Sounds good but a continuous power density of 1.9 KW/Kg is not that impressive.

HarveyD
Perhaps,
but what if you wanted twice or more torque out of that same volume, envelope, efficiency and radius at the same pole count and current densities for the equivalent horsepower your getting now, ,,would that sound better?

increasing efficiency throughout the speed range...
This is a good goal, it sounds like they are on their way.

increasing efficiency throughout the speed range...
This is a good goal, it sounds like they are on their way.

The power/weight ratio of 1.9 KW/Kg of this e-motor is what is not impressive. Many recent e-motors do between 5.0 KW/Kg to 7.5 KW/Kg and are more suited for electric planes.