Ford has revealed the 2020 Escape; the small SUV will make its first public appearance at the New York International Auto Show. Escape, which debuted the world’s first hybrid SUV in 2005, brings back two hybrid choices for 2020—a standard hybrid and a plug-in variant—and introduces technologies ranging from drive modes and driver-assist features to electric vehicle ingenuity and on-board connectivity. 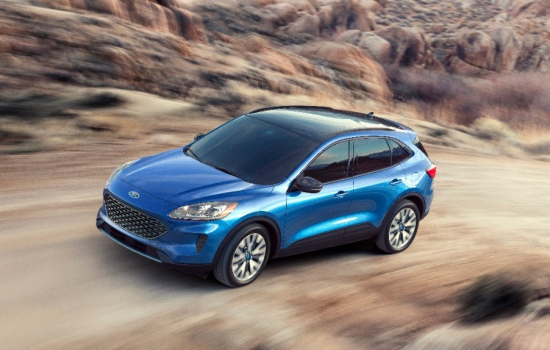 Gasoline engine-powered models as well as the standard hybrid are available with all-wheel drive. EcoBoost-equipped models get a new quick-shifting 8-speed automatic transmission for smooth, responsive shifting, while every Escape receives an all-new suspension and improved isolation with a new isolated rear subframe.

To help conserve fuel, the 1.5-liter EcoBoost debuts cylinder deactivation, a Ford first for North America, which senses when one cylinder isn’t needed and shuts it down automatically. The system can activate or deactivate a cylinder in 14 milliseconds to maintain a smooth ride.

The plug-in hybrid variant, available on every trim level except S and SE Sport, projects a best-in-class EPA-estimated range of at least 30 miles in electric-only mode.

Hybrid models feature four EV modes that allow customers to select the settings most suitable for their individual needs. This means:

The all-new Escape Hybrid packages its liquid-cooled lithium-ion battery below the second-row seats rather than occupying a significant portion of the cargo area. The briefcase-shaped battery in the standard hybrid measures approximately one-third the size of the old Escape Hybrid battery.

Despite a slight drop in vehicle height and with the hybrid battery packaged below, the engineering team was able to increase headroom throughout. First- and second-row headroom, shoulder room and hip room all improve versus the current Escape.

Titanium models are available with an all-new heads-up display, a first-for-Ford in North America. The feature that projects information onto a 6-inch screen, giving drivers easy access to important information such as vehicle speed without taking their eyes off the road.

Class-exclusive driver-assist technologies include available Active Park Assist 2.0 and Evasive Steering Assist. Active Park Assist 2.0 allows the driver to park in a parallel or perpendicular spot with the touch of a button, without having to work the steering wheel, gear shifter, gas or brake pedal. Evasive Steering Assist detects a slower-moving or stationary vehicle ahead and provides steering support that can assist the driver to avoid an imminent collision.

Escape comes standard with Ford Co-Pilot360, and makes available other driver-assist features such as Adaptive Cruise Control with Stop-and-Go and Lane-Centering.

FordPass Connect is a standard feature that provides 4G LTE Wi-Fi for up to 10 mobile devices with compatible wireless subscription service. FordPass Connect also gives drivers remote access to their Escape, allowing them to use their smartphone to lock, unlock, locate and start the vehicle, as well as monitor key vehicle diagnostics.

An 8-inch touch screen—standard on SE models and above—shares information with the available 12.3-inch all-digital instrument cluster, which displays important vehicle information such as speedometer and fuel level. It uses 3D animated graphics to indicate the drive mode.

The all-new Escape, available in S, SE, SE Sport, SEL and Titanium series trim levels, is built at Louisville Assembly Plant in Kentucky. Vehicles are due to reach showrooms this fall. Plug-in hybrid units are due to arrive next spring.

For the 2005 model year, Ford became the first US manufacturer to offer a hybrid when it introduced the Escape Hybrid, the world’s first-ever hybrid SUV. Between 2004 and 2012, 114,000 Escape Hybrids were sold.

For the 2013 model year, Ford introduced a third-generation Escape, with European styling shared with its global cousin, Kuga. To date, Ford has sold more than 4.5 million Escapes in North America; more than 98% of them are still on the road today. Escape is the company’s second best-selling vehicle in the United States, trailing only F-Series.

Apparently the PHEV requires a 14.4 kWh battery to do what the 2013 Fusion Energi does with about 7.5 kWh.  And they probably didn't rate it for towing a thing, either.

So much potential, ignored.

Actually the 2019 Fusion Energi had a 9 kWh battery to get up to 25 mile range which the Escape PHEV should match (obviously still not the same). The Escape PHEV is 585 pounds heavier, so probably weighs over 4000 lbs.
The Ford Escape at least looks car like which is not bad compared to previous Ford Crossovers. Not sure about towing, though Ford will have both the Ford Explorer and the "Baby Bronco" to handle that role.

Make that 585 pounds heavier than a regular Ford Escape. The 2019 Ford Escape had a 1500 - 2000 pound towing capacity so the 2020 PHEV should match. The "Baby Bronco" btw is built on the Escape chassis though it will definitely look more like an older Bronco.