Toyota announced that it will grant royalty-free licenses on nearly 24,000 patents it holds (including some pending applications) for vehicle electrification-related technologies. Also, Toyota will provide fee-based technical support to other manufacturers developing and selling electrified vehicles when they use Toyota’s motors, batteries, PCUs, control ECUs, and other vehicle electrification system technologies as part of their powertrain systems. 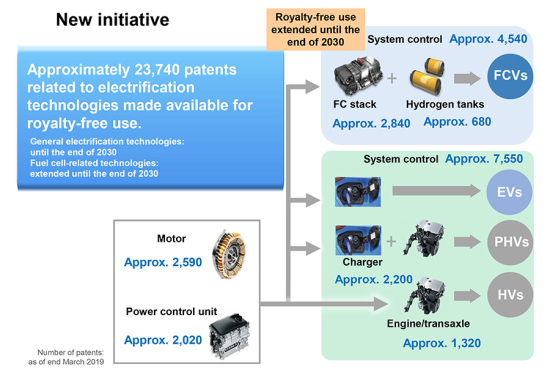 Ultimately, by granting royalty-free patents and providing technical support on its vehicle electrification systems, Toyota says it aims to help further promote the widespread use of electrified vehicles, and in so doing, help governments, automakers, and society at large accomplish goals related to climate change.

Based on the high volume of inquiries we receive about our vehicle electrification systems from companies that recognize a need to popularize hybrid and other electrified vehicle technologies, we believe that now is the time for cooperation. If the number of electrified vehicles accelerates significantly in the next 10 years, they will become standard, and we hope to play a role in supporting that process.

—Shigeki Terashi, Member of the Board and Executive Vice President of Toyota Motor Corporation

More specifically, the patents included are for parts and systems, such as electric motors, power control units (PCUs), and system controls. These are core technologies that can be applied to the development of various types of electrified vehicles including HEVs, plug-in hybrid electric vehicles (PHEV), and fuel cell electric vehicles (FCEV).

Together, Toyota will offer approximately 23,740 patents awarded over more than 20 years of electrified vehicle technology development. The grant period will start immediately and last through the end of 2030. Contracts for the grants may be issued by contacting Toyota and discussing specific licensing terms and conditions.

As for the fee-based technical support Toyota will offer, specifics include providing overviews of vehicle electrification systems, control guides, and detailed explanations of tuning guides for vehicles that will utilize its systems. The guidance that Toyota will provide, for example, includes helping other automakers to achieve high-level product performance in terms of fuel efficiency, output, and quietness fit for the vehicles they are working to develop. The services will be contract-based. More details will be provided to interested parties.

By offering both royalty-free patents and technical support for electrified vehicles, Toyota sees an opportunity to encourage the development and market introduction of electrified vehicles around the world, something it has long considered a top-priority management issue based on its strong belief that environmentally-conscious vehicles will contribute to the fight against climate change only if they come into widespread use through reductions in CO2 emissions.

Sounds like a good idea - but is it too late ?
How long will it take other car companies to understand what they can now do ?
If they had done this say 4 years ago, it might have had more impact.
IMO, 20-30 mile PHEVs are the place to be - enough battery to do nearly all your daily runs, but no problems with range, and not so much battery to cost too much or take up too much space.

It's interesting that the Prius Prime is the only venture Toyota has made into PHEVs.  You'd think that the company whose name is practically synonymous with "hybrid car" would have pushed harder there.  A hybrid pickup with the option to provide 120/240 VAC when parked would be very popular with e.g. building contractors, and the inverters required to run the motors should be able to handle such loads without even breaking a sweat.

I agree but if you look at GM’s data on trip lengths then you would want something in the order of 50-60 miles AER to accommodate the typicalAmerican drive cycle.

@EP
My sentiments about Toyota PHEVs are similar. A PHEV Tacoma or RAV4 would be outstanding. The RAV4 which is now aimed more toward off road capability could use that 120 VAC for camping as well.
Maybe Toyota is waiting to see how successful the Subaru PHEV develops which also uses the Toyota PHEV system.

@Gasbag
The irony is that if the Toyota PHEV swapped the Sanyo 25 Ah (PHEV2 battery cells) with 50 Ah cells giving a battery size of 17.6 kWh it would get that 50 mile range. This would not weigh any more or possibly cost more either.
Maybe the joint venture with Panasonic will help.

If a couple of big companies get behind this, you could have all sorts of innovation - I am sure lots of ideas have been stymied due to the patent hoard that Toyota have.
And Toyota will be well placed to build on other companies' ideas.
As long as the process is not too bureaucratic so engineers and marketeers can get on with the work.

I was impressed when Tesla unlocked its technology all those years ago.
Far better to grow the industry and it's reputation than hobble it with lawyers and square wheels. If manufactures don't understand that there is more value in goodwill and focusing on delivering the best product they can they can't really claim to be in the interests of customers.

Customers will be the end winners?

Surprising that Toyota did not (already) use all their knowhow & patents to mass produce more PHEVs, FCEVs and BEVs to reduce fossil fuel consumption, pollution and GHGs?

@harvey,
Yes, you would hope so. Toyota are trying to maximise their profits, and if they can do this by reducing petrol use, so be it.
They might sell more hybrids if they could get the price down, or if the price of fuel went up.
If there is more competition, the price should come down and more fuel will be saved.

My area of the USA appears to have just gone through the switchover from winter to summer gasoline blends, which seems to come along with refinery maintenance.  The price of gasoline had been bumping along at around USD2.00/gallon, then shot up to USD2.75 or so, and was around USD3.00 last week.  Suddenly this week everything has fallen back to about USD2.65.

Such large changes in price suggest little storage in the system and very firm demand.

@EP, it is about $5.85 / US Gal here in Ireland.
You might sell more Prii if the price in the US was similar.
(Mind you, we mostly buy diesel over here (though not as much as 2015)
for larger cars and SUVs).

The company where I was employed - until my retirement - built a tank-farm management system for Saudi-ARAMCO. The flow of fuel from the manifold area of the refinery to the tanks constantly changed in the course of a day. Additionally, the tanks were constantly visited by tank trucks withdrawing fuel from the tanks. The fuel flow from the manifold to the tanks changed from normal gasoline to diesel and to super etc. etc. and to the respective tanks. The purpose of this system was to monitor the activities filling and withdrawing so that at a glance it could be determined how much fuel and respective type went into and out of the tanks and what was the remaining balance at the end of the day. It seems that the system functioned so well, that it was just a matter of time until it was transferred to gasoline stations. The traffic at the gas stations was monitored and relayed to a central monitoring point and gathered. Was the traffic high, then the price went up accordingly; was traffic low, the price dropped in the same manner. Apparently, this system was adopted world wide resulting in price changes within seconds. The monitoring computer can be fed with the respective software parameters within which the price changes occur. A clever method to squeeze profits to an absolute maximum and a good example of ample misuse deviating from the original intention.