The study, led by Dr. Jan Lewandrowski of USDA’s Office of the Chief Economist, and published in the journal Biofuels, supports findings of other research that ethanol has a significantly better greenhouse gas profile than previously estimated.

The study attributes much of these additional benefits to revised estimates of the impacts of land-use change as a result of demand for ethanol.

The study projects that with added improvements in refineries and on farms, a reduction of more 70% in lifecycle emissions is possible by 2022. 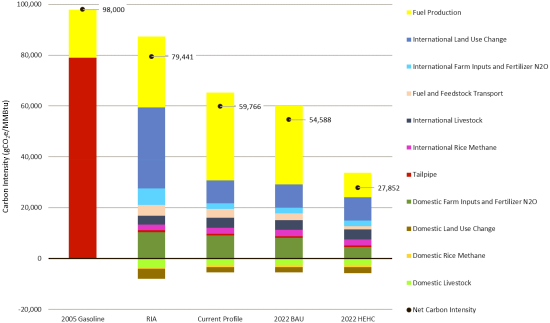 The authors argued that using billions of kilograms of US corn to produce ethanol reduces supplies of, and increases prices for, corn and other commodities in domestic and world food and feed markets. Farmers in the United States and elsewhere respond by bringing new land into production. These land-use changes (LUC) are related to ethanol production because the new land is used to grow more corn and to replace some of the decreased production of other commodities that occurs when US farmers allocate more existing cropland to corn.

Searchinger et al. argued that including LUC emissions results in corn ethanol having a higher GHG profile than gasoline.

RFS2 directed the US Environmental Protection Agency (EPA) to do a full GHG life-cycle analysis (LCA) for corn ethanol, including both direct and significant indirect sources of emissions. The EPA concluded that in 2022, the emissions profile of a unit of corn ethanol from a new natural gas-powered refinery would be 21% lower than the emissions profile of an energy-equivalent quantity of ‘average’ gasoline in 2005.

Since 2010, the RIA [Regulatory Impact Analysis] LCA for corn ethanol has dominated policy discussions and federal regulations related to ethanol as a renewable fuel and a GHG mitigation option. During this time, a large body of new data, scientific studies, technical reports, and other information has become available collectively showing that the emissions pathway corn ethanol has followed since 2010 is much lower than that projected in the RIA. Our objective is to assess corn ethanol’s current GHG profile in light of this new information. This work is timely as many countries (e.g. Colombia, Japan, Brazil, Canada and the European Union) are developing renewable energy policies that require biofuel substitutes for gasoline to reduce GHG emissions by more than 21%. Our results could help position US corn ethanol to compete in these new and growing markets.

In the new USDA study the researchers reviewed the RIA projection, described relevant new information that has become available since 2010, and quantified a new emissions value—where needed—based on the new information.

Most of the new data, emission factors (EFs), and global warming potentials used in this analysis have become available from 2010 to 2015. Most of the studies the team used have publication dates between 2013 and 2015.

Using BEVs/FCEVs fed with clean e-energy and/or clean H2 from REs is a superior solution?

Since we need at least an 80% reduction in CO2 emissions to get to zero net atmospheric accumulation, even 70% reduction over gasoline must be considered a marginal failure which requires even bigger decarbonization efforts elsewhere.

One of the big issues is the fossil fuel used to power the refinery (distillery).  Natural gas is obviously better than coal or propane in this regard, but zero-emission heat would almost certainly kick ethanol over the 80% barrier.  Nuclear heat or electric heat from surplus wind power are both possibilities.  Distilleries do not require high-pressure steam, so cogeneration of nuclear electric power and ethanol is a distinct possibility.

Mean temperature has already increased by 1.7C in Canada and even more North of 55 and has been increasing at a higher rate in the last 20 years.

We will have to seriously reduce using-burning fossil and bio fuels soon not to go well above +2C by 2040-2050.

Aggressive Electrification with clean energy may be the best way to do it?

This confirms my conclusion from the 2000's that this Princeton prof was a hack or a religious zealot for particular green solutions like batteries. It was clear then that he was not realistic regarding the improved practices and yields both on farm and at the ethanol plants. Farmers typically work very hard to be good stewards of the land and still maintain business cash flow year to year.

I love the nuclear power options, if only green religion would allow it. Very sad, nuclear has been SO safe and MSR generation has potential to be much more so! As world population expands over the next generations nuclear would be the logical choice to power xx to liquids and transition more farms back to food. IF economical & publically acceptable liquid fuels are not brought to commercial volumes Agribusiness will continue to make a lot of biofuel. Food prices will have multiple upward pressures which can be difficult even deadly for those in real poverty and destabilizing to whole counties.

Ethanol as a fuel gets raps from +++ all the way to --- for emissions etc.
I'm firmly of the belief that used correctly it is a +++ good product but experience suggests there are a few proviso's I.E. lower energy content/ volume could cause lean burn issues in certain applications as when fuel trim is set very close to it limit. That is generally not a problem for production engines especially once the motor is 'run in'. It can be problematic when left for extended periods in small motors and cars owing to its gumming and water cycling aspects.

Hardly surprising that different studies will have wildly differing outcomes if there are wide ranging factors from the inputs from water use weather fertiliser land management and conversion. We know the same from Palm oil plantations and land clearing conversion etc.

The elephant in the room that is not mentioned is the need for cellusosic pathway and the carbohydrate food crops to reduce the global agricultural footprint to meet greenhouse reduction targets.

"Cellulosic pathways" always go through some kind of hydrolization of the carbohydrates (discarding the lignin, which is a large fraction of the total), discarding still more through CO2 losses in fermentation and powering the whole process with fossil fuel of some kind.  It's no wonder that these things are so pathetic at replacing fossil fuels; they are engineered to be unable to do without them.

Make the 10% ethanol out of cellulose, use the grain for food/feed.