Mercedes-Benz has been conducting this environmental check regularly since 2005, starting with the S-Class at the time. Depending on the segment, Mercedes-Benz bases its calculations on a driving distance of 150,000 to 300,000 kilometers.

The same applies to fuel cell vehicles, which give rise to more emissions in production but slightly fewer than batter vehicles in operation, and where the supply of hydrogen has a major influence on the overall effect.

However, the 360° environmental check is not only about CO2 emissions. In order to gauge a vehicle’s environmental compatibility, the experts consider all emissions and the use of resources over the entire lifecycle. This is achieved by means of an eco-balance that records the key environmental impacts.

It includes the extraction of raw materials—the use of platinum in the fuel cell has been reduced by 90% compared to the B-Class F-CELL—production and use, and finally recycling. Development of the components in the new powertrain was accompanied by concepts for eventual recycling. This means that as with every other Mercedes-Benz, a high level of recyclability is also assured for the GLC F-CELL.

Different CO2 scenarios depending on the power and hydrogen source. As in all electric vehicles, how the necessary power is generated is also the decisive factor for the Mercedes-Benz GLC F‑CELL: 100 percent renewable, e.g. hydroelectric power, or e.g. in the EU power mix. The same question arises with respect to the generation of hydrogen: the scenarios considered in the eco-balance are reformation from natural gas, the H2 mobility scenario (50% regenerative, 50% from natural gas), and 100% generation of hydrogen from electrolysis using hydroelectric power.

The eco-balance, and especially the CO2 balance, varies accordingly over an entire lifecycle with a mileage of 200,000 kilometers. While the components specific to the GLC F-CELL lead to considerably higher CO2 emissions during production, these can in part be considerably overcompensated over the use phase, depending on the hydrogen and power source.

The CO2 saving over the entire lifecycle is greatest if the GLC F-CELL is operated exclusively with hydrogen and power from renewable sources. Savings of more than 50% are possible compared to the scenario with hydrogen from natural gas and the EU power mix. 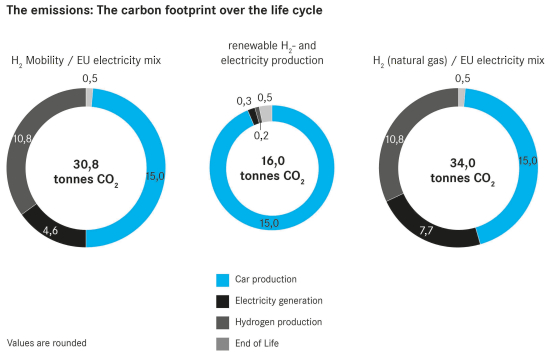 Advances in lithium-ion battery technology will further contribute to this reduction: Energy density will be further increased, while batteries will become increasingly lighter in weight. The materials composition will change, and materials such as cobalt will be replaced by nickel.

This holistic approach also includes the use of vehicle batteries in stationary energy-storage devices after their mobile service life. The aspect of energy supply to the production locations also plays an important role. All Mercedes-Benz plants in Germany will therefore switch to CO2-neutral energy supply, e.g. wind power and hydropower, by 2022. This will reduce the CO2 expenditure in the lifecycle of the vehicles by the amount accounted for by assembly of the components.

The GLC F-CELL. The Mercedes-Benz GLC F-CELL features both fuel cells and a battery drive which can be charged externally using plug-in technology. Apart from electricity, it also runs on pure hydrogen. This has a number of advantages:

Two carbon-fiber encased tanks in the vehicle floor of the GLC F-CELL hold 4.4 kg of hydrogen at 700 bar. With a hydrogen consumption of around 1 kg/100 km, the GLC F-CELL achieves around 430 hydrogen-based kilometers in the NEDC cycle; in hybrid mode it additionally delivers up to 51 km on a fully charged battery.

The lithium-ion battery has a gross capacity of 13.5 kWh and serves as an additional energy source for the electric motor. Plug-in technology makes it easy to charge via the 7.4 kW on-board charger at a standard household socket, a wallbox or a public charging station—from 10 to 100 percent SoC (State of Charge) in approx. 1.5 hours if the full power is used.

Just like the drive motor, an asynchronous motor with an output of 155 kW (211 hp) and a torque of 365 N·m, the storage battery is space-savingly installed in the rear of the SUV.

I have been critical of long range BEVs in the past about their high level of emissions in production.

As a supporter of FCEVs it would be disingenuous of me not to express concern over the note here about the high level of emissions in the production phase of this FCEV - it was difficult to unearth much data on the subject so I had not a view on it.

Unfortunately no numbers are provided here to give an accurate view of how much, as the size of battery for a BEV they are comparing it with is not given.

It is something which I will be looking out for as better data comes in.

The mention of high GHG emissions in FCEV production surprised me also.  The HFCV has long been touted as THE Green way of the future because it's a ZEV.  Now we're told that it's anything but, because we don't have ZEFs (factories) and ZEMs (materials).  These facts must have been known for a long time, but were carefully kept out of the debate.  This raises serious questions:

I have some answers for #2:

And then we come to this:


This holistic approach also includes the use of vehicle batteries in stationary energy-storage devices after their mobile service life. The aspect of energy supply to the production locations also plays an important role. All Mercedes-Benz plants in Germany will therefore switch to CO2-neutral energy supply, e.g. wind power and hydropower, by 2022. This will reduce the CO2 expenditure in the lifecycle of the vehicles by the amount accounted for by assembly of the components.

This is an accounting fraud.  The M-B plants are not going to have their own dedicated wind and hydro supplies; they are going to feed from the European grid like everyone else.  What they are going to do is pay for certificates saying "This Green power someone fed into the grid, somewhere, sometime is MINE (and not yours, you dirty environmental heathen)" while doing little or nothing to reduce the coal-fired generation which actually keeps the system from collapsing when the wind sags or the sun goes behind a cloud.

What irks me is that the most successful decarbonization stories in Europe, France and Sweden, are being demonized for "succeeding but doing it wrong" and are being forced down the failed Green path which will increase both their emissions and costs.  These propaganda agencies are very, very powerful.

Greenwashing can take care of the dirtiest diapers.

I've supported nuclear for over half a century.

But I don't deal with what I hope would be the case, but with what is happening.

And in the West they are not building it. so I am not interested in how dandy BEVs would work if they were.

That is 'why hydrogen' as it is the only conceivable way of getting things to work without it, as it provides the needed storage in the GWH's

For China and other places where they are building nuclear, pressing ahead on a BEV path makes lots more sense.

But it should be noted that China is going heavily for hydrogen to power heavy transport in preference to using imported and polluting diesel.

There are a lot of misleading informations about this new excellent FCEV.

4) Could China mass produce very low cost (under 3 cents/kWh for 50 years) small size transportable (containerized) NPPs for the local market and for export to EU and USA?

For context I searched online and find that an average ICE car production results in 9.5 tonnes of CO2 and produces about 4.7 tonnes per year from gasoline consumption (not sure if that includes CO2 burnt in production).

A substantial carbon tax imposed in the major manufacturing countries around the world could help sort out the virtues of competing technologies but I'm not too optimistic about that happening soon. Attempts here in Canada to impose a modest tax is meeting with a lot of opposition.

Whilst I highlighted Mercedes's claims as it weighs against my views on FCEVs, I am certainly not going to take their word on it as gospel, at least without seeing their detailed sourced figures.

The German car companies can be somewhat economical with the truth, depending on what they are currently trying to push, so whilst noting their claims I am awaiting better sources, or at any rate more detailed ones.

Based on the trip computer numbers, my car claims to have burned just 402 gallons of fuel since I bought it.  (It's actually been filled with somewhat more, because of evaporative losses.)  Assuming 450 gallons total over 6 years, that's:

If the electric supply was fully decarbonized that would be TOTAL emissions since new.

I'm all in when it comes to solutions and like most, I'm skeptical about FCEV's for most mobility applications but the whole energy landscape is so unpredictable you never know. For me personally I drive about 12,000 km per year and most of those are in long distance 250 km + trips so I might only be able to get 200 electric kms per month which wouldn't justify the extra cost.

Ultimately a full electric would be best suited for me but I'd want to have the 300+km range that is only now coming out and for the amount of driving I do buying new isn't a smart choice from an economic perspective.

Calgarygary, my last substantial trip was just last week.  I drove approximately 800 km and averaged over 50 mpg for it (I admit I cheated, I went all-electric for the last leg of the trip back home).  Up to the point I kicked over to electric the trip computer claimed ~48 MPG (4.9 l/100 km).  This is in a 4-door mid-size car (Ford Fusion).  You would not believe what an Atkinson cycle engine and hybrid drive can do for you even when you are not draining your traction battery until you experience it.

My wife's recent Prius HEV does 53 mpg average (with one passenger) in town and on highways. That is much better (about 11 mpg better) than my older Camry HEV.

AlzHarvey, that was just for the one long trip last week.  I'm averaging well over 130 MPG.

At an average of 130 MPG, SAEP is a very special PHEV user? Good for him?