In addition to the 2.0-liter CRDi 48V diesel powertrain introduced in the New Tucson in 2018, Hyundai Motor has now combined its efficient and responsive 48V mild hybrid technology with the 100 kW/136-PS 1.6-liter CRDi diesel engine.

The technology comprises a 48-volt battery, a Mild Hybrid Starter Generator (MHSG) and LDC converter (Low Voltage DC/DC). In addition to the 48V electrical system, the vehicle is equipped with the conventional 12V electrical system, which is connected via the DC/DC converter to the 48V system. Thus, parts of the energy stored in the 48V battery system can also be used to stabilize the 12V on-board power supply. 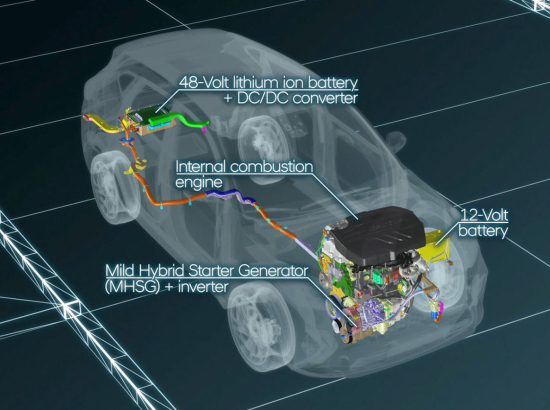 The 0.44 kWh 48V lithium-ion battery, which supplies the mild hybrid system with electric energy, is located beneath the rear luggage compartment, while the MHSG is mounted to the combustion engine. A belt connects the MHSG to the crankshaft of the internal combustion engine. The MHSG generates kinetic energy from recuperation of up to 12 kW and 55Nm of torque at the MHSG shaft.

The system was developed at Hyundai’s European Technical Center in Germany and Hyundai’s R&D Center in Namyang, Korea. It will be available in combination with more engines in the future.

Hyundai’s Mild Hybrid technology as used with the New Tucson improves the powertrain’s fuel economy and CO2 emissions by up to 11% (NEDC 2.0) depending on the vehicle specification. As an additional benefit, the system supports the internal combustion engine, compensating with power during the different stages of driving, and helps lead to a faster and smoother engine start.

The mild hybrid system has particular advantages in city traffic, with the MHSG supporting the combustion engine when re-starting after traffic stops. This action supports a faster and smoother engine start with supplemental torque, drawing on energy from the 48V battery.

As a result of the earlier and faster delivery of torque, the engine start can be anticipated by 0.2 seconds. The conventional 12V starter is only used for the initial starting operation if the engine oil is still cold and a higher starting torque is required.

The MHSG assists the combustion engine during take-off by compensating with torque and power.

Under acceleration, the MHSG supports the combustion engine with compensatory 4 to 12 kW of power, depending on the battery system’s state of charge and the degree of accelerator input from the driver. Once the required speed is reached, the MHSG shifts to neutral mode, delivering no power.

At a constant speed, the MHSG either is at idle or acts as a generator charging the 48V battery, depending on the battery state of charge.

In active braking or overrun phases, the rotating crankshaft powers the MHSG, which then acts as a generator with a maximum recuperation output of 10 to 12 kW. The generator converts the kinetic braking energy into electricity, and feeds it back into the 48V battery. In these phases, the combustion engine remains switched on and clutch kept closed to be able to transfer the power from the wheels over the transmission and the engine to the MHSG.

When coasting at low speeds, the start-stop function already activates at 30 km/h. Under deceleration between 30 and 0 km/h, and with the clutch disengaged, the engine is switched off completely.

With the additional mild hybrid powertrain for its best-selling model in Europe, Hyundai is further expanding its electrification strategy.

Hmmm.  Nothing about electrified accessories, which is where a lot of the benefits accrue.

This cars is a very big seller in Ireland (#2 after the VW Golf), and mainly the diesel variants. So this is a big deal, as long as it is not too expensive compared to the basic diesel version.
For the record, the cheapest diesel (1.7, 2 wheel drive) is E28K in Ireland!
Consider yourselves lucky, US types.

The ICE companies are have warehouse clearance sales to make room for the EVs...may take a couple of years.

This will be the mainstream type of car (also in gasoline version, of course) with ICE and no plug-in features. More expensive cars will come in different parallel hybrid versions but with larger electric machines in general and with an integration of the motor/generator in the transmission rather than belt driven. Will we see the Toyota type of "full hybrids" in this perspective? Well, there could be a niche although the higher end of parallel hybrids will be cheaper and achieve almost the same reduction in fuel consumption as the "full" hybrids. It now appears as PHEVs also compete with full hybrids, primarily due to favorable incentives and promotion from EU via CO2 credits. It is also apparent that full hybrids do not receive as much attention anymore as a few years ago. A Toyota's type of full hybrid is not "fun to drive", with a comparatively large (in contrast to small down-sized turbo engines) screaming naturally-aspirated engine and apparent lack of power. You get the feeling of an outdated concept, although fuel economy remains impressive even at today's standards.

Almost fifty years too late. This vehicle should have been introduced to the market after the worldwide oil crisis in 1973 and 1975. However, it doesn't effect me as I'm mobile with electrons.