Survey finds 37% of commuters in London have already changed usual mode of transport due to ULEZ; 141% increase in use of motorcycles

Most vehicles, including cars, vans, motorcycles and scooters, will need to meet new, tighter exhaust emission standards or pay a daily charge to travel within the area of London’s Ultra-Low Emission Zone (ULEZ), which comes into effect today.

Motorbike insurer Bikesure recently surveyed 1,000 commuters in London to find out how the ULEZ will impact them. Among the questions, respondents were asked if they have changed or thought about changing their usual mode of transport in preparation for the ULEZ. The survey found that: 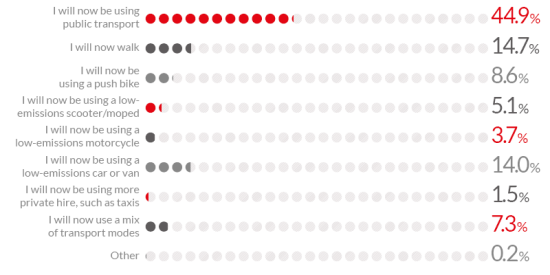 The survey also revealed that: 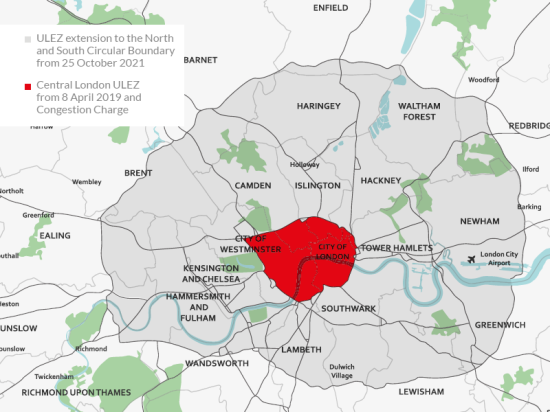 The respondents were also asked how they felt about the ULEZ:

I think the English people are actually supporting these restrictions; maybe because many of the citizens remember the killer coal smog of 1952 and the peasoupers of that era. If we tried that in a U.S. city, this fossil fuel president would close the city down.

Londoners are divided over this issue. The use of Public transport and other "zero" emission alternatives (walking, bikes) is the main option for 7 out of 10 Londoners.

There will be hell to pay when the wider zone (which seems to mean most of London) begins in 2021.
Euro 4 is from 2005 on, Euro 6 is from 2015 on.
So I can see plenty of petrol cars and much fewer diesel ones.
This will be a problem for people with older commercial vehicles, buses etc.
An individual can buy a petrol car (or bike) without to much fuss, but a small company will struggle to buy a new bus or van.
@Lad, you would have to be about 75 to remember the great pea souper of 1952. Most people's "memory" will be of watching it on "The Crown" in Netflix (good episode, BTW).
It probably depends on how much money you have - if you are reasonably well off, you'll be fine, if not, you'll have a problem, especially if bikes or buses don't suit you.
@Christos, I am not sure that you need to put bikes and walking in inverted commas - they really are zero emissions; unlike electric cars, which just transfer the emissions to the power stations.