France-based global energy generator EDF has launched Hynamics, a new subsidiary for the Group that will be responsible for offering effective low-carbon hydrogen for industry and mobility. EDF’s ambition is to become a key player in the hydrogen sector in France and around the world.

According to a report released by McKinsey, hydrogen consumption will represent 18% of the world’s final energy demand in 2050. 95% of hydrogen is currently produced from fossil fuels. The process is very high in CO2 emissions: to produce 1 kg of hydrogen, 10 kg of CO2 is emitted.

Unlike this method, Hynamics has opted for water electrolysis to produce its hydrogen, a technology that does not emit very much CO2 at all, as long as the electricity used itself comes from low-carbon production methods. 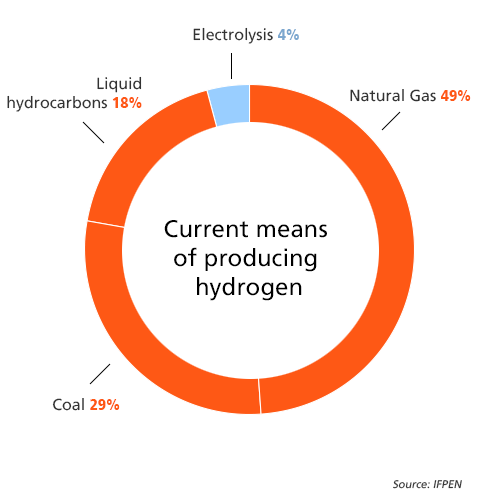 At the end of March 2019, Hynamics teams have identified and are working on some 40 target projects, in France as well as other European countries including Belgium, Germany and the United Kingdom.

Hynamics is the result of an “intrapreneurial” project led by ten or so employees and nurtured within EDFPulse Expansion, the Group’s start-up incubator.

The EDF Group’s interest in hydrogen is not new. Through its R&D Division, EDF has developed expertise in the field over many years, both for production and use, particularly within Eifer, a laboratory shared between EDF and the Karlsruhe Institute of Technology, based in Germany.

In 2018, EDF consolidated its interest in the emerging low-carbon hydrogen market by acquiring a 21.7% stake in McPhy, a manufacturer and marketer of electrolysers and a player committed to low-carbon hydrogen since its creation in 2008. By also signing an industrial, commercial and research partnership, the two companies aim to create a synergy between McPhy’s technological expertise and EDF’s knowledge of electrical systems and low-carbon electricity production.

This is an interesting figure.  Direct reaction of water with methane via the reaction CH4 + 2 H2O -> CO2 + 4 H2 produces 5.5 kg of CO2 per kg H2.  Apparently the energy of another 0.8 fractions of CH4 is required to drive the reactions, and that methane contributes no hydrogen to the product.

Or maybe the 10 kg figure is an average over all H2 production, including from coal.

Hynamics offers two different low-carbon hydrogen solutions
- - Hydrogen is a necessity for many industries and this use will continue and very likely expand to other industries, e.g. steel production.
- - Not so sure about mobility uses at this time. Main concerns relate to volumetric energy density (which rules out air mobility) and infrastructure.
EDF has a good electric energy mix and will get better as it moves away from Coal.

Number (1) method should be phased out, specially where and when clean electricity is available.