Home About Contact RSS GCC Twitter Newsletter
DOE: most new light-duty vehicles have transmissions with at least six speeds
Nissan UK survey finds only 1 in 3 aware of the ULEZ going live; confusion over payment of charge

All but three European car manufacturers met their specific emission targets in 2017, based on current European vehicle test rules. Nevertheless, average carbon dioxide (CO2) emissions from new cars sold in the European Union in 2017 rose by 0.4g of CO2 per km from 2016, according to final data published by the European Environment Agency (EEA). This increase brings car manufacturers further away from their 2021 targets. 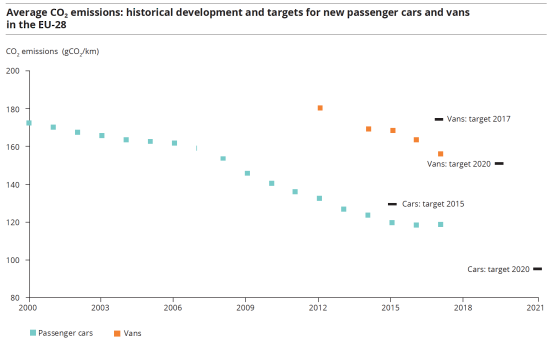 Although this level remains below the current target level of 130 g CO2/km, it is well above the target of 95 g CO2/km to be achieved by 2021.

Since 2010, when monitoring started under current EU legislation, official emissions from new cars have decreased by 15.5% (almost 22 g CO2/km). However, between 2015 and 2016, emissions decreased by only 1.5 g CO2/km, which was less than half of the average annual reduction needed to reach the 2021 target. The increase in 2017 confirms that car makers need to achieve further and faster improvements in manufacturing and promoting more efficient cars if the target is to be met.

While certain other manufacturers, if considered individually, would have exceeded their specific emission target, they met their obligations as members of pools or thanks to derogations.

Other key findings of the report:

Post-2020 CO2 targets for cars, vans and heavy-duty vehicles. In December 2018, EU lawmakers reached an agreement on emission targets for the average fleet emissions of new passenger cars and light-commercial vehicles for 2025 and 2030. These targets aim to reduce the average CO2 emissions from new cars by 15% in 2025 and by 37.5% in 2030, compared with 2021 baseline levels.

For light-commercial vehicles, the targets consist of reductions by 15% in 2025 and 31% in 2030, relative to 2021. In February 2019, EU lawmakers also reached an informal agreement setting a 30% reduction target for the average fleet emissions of new trucks by 2030.

In 2019, the EEA will start collecting data on new heavy-duty vehicles in accordance with Regulation (EU) No 2018/956.