Home About Contact RSS GCC Twitter Newsletter
Study estimates that PM2.5 pollution in US was responsible for 107,000 premature deaths in 2011; 28% associated with transportation
New bipartisan bill in US Congress to expand EV and hydrogen fuel cell tax credits

The public transport company ESWE Verkehrsgesellschaft mbH from Wiesbaden in Germany’s Hesse region has ordered 56 Mercedes‑Benz eCitaro electric urban buses. With this commission, the city of Wiesbaden is switching a fifth of its bus fleet to electromobility within a short period of time.

As a provider of comprehensive electromobility solutions, Mercedes‑Benz also takes care of the adaptation of the service yard, the equipment and setting up of charging infrastructure, as well as the charging management process itself. Planned tasks even include building the transformer station for converting medium-voltage to low-voltage electricity as well as the installation of cables on the site.

Wiesbaden will receive the first 10 eCitaro buses from the order this year, with the remaining buses to be delivered next year. 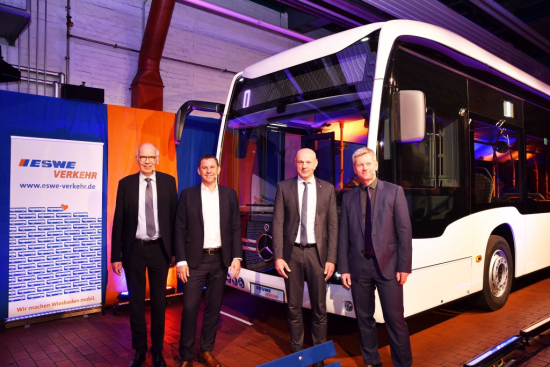 The first 15 eCitaro for Wiesbaden will be equipped with current-generation lithium-ion batteries—NMC batteries (lithium-nickel-manganese-cobalt-oxide cells). Each eCitaro is equipped with twelve battery packs with a total capacity of 292 kWh.

Even in winter when faced with the difficult demands of using all-electric heating, the eCitaro can still cover more than 200 km according to the SORT 2 testing method. All 56 buses are charged by plug in the depot.

Subsequently, Mercedes-Benz plans to increase the range of the eCitaro yet again by a fuel cell range extender. It will be designed to allow the eCitaro to fulfil nearly 100% of all requirements on city buses. This technology eliminates the need for opportunity charging and the complex infrastructure required for it in almost all cases—the eCitaro will be able to replace city buses with combustion engine virtually one to one.

Charging management is also part of the Wiesbaden order. It will be realized together with the Berlin-based partner company IVU Traffic Technologies, a specialist for customized IT solutions. First, this involves assigning each bus a defined charging point upon arrival at the depot. Smart charging management ensures that all buses are charged with the necessary amount of electricity for their next trip.

This also includes preconditioning, i.e. the temperature control of the passenger compartment and batteries, and thus ensures maximum efficiency. Vehicle servicing for ESWE’s eCitaro buses will be carried out in co-operation with Taunus Auto Verkauf AG (TAV) located in the immediate vicinity.

ESWE Verkehrsgesellschaft mbH operates Wiesbaden’s local public transport and has a fleet of 271 buses. With 41 bus lines, its buses transport nearly 60 million passengers a year. Of its roughly 1,100 employees, two-thirds work in the transport service.

The majority of the vehicles in the fleet are Mercedes-Benz Citaro. Mercedes-Benz and ESWE Verkehr have been cultivating a successful business partnership for a long time. This is not only evident in two classic city buses with the three-pointed star built in 1961 and 1983. For example, ESWE Verkehr took over the first low-emissions Citaro compliant with the Euro VI norm in 2012. It had previously had its world premiere in public there.

The solid state battery is interesting news.
Not too immediately attractive, but its a start:

'The characteristics of solid-state batteries differ significantly from NMC batteries—different shape, larger and not suitable for quick-charging.'

The only other thing I have been able to sniff out is that they don't use cobalt.

Anyone got any more data?

Good news for city buses electrification. The lighter and more compact solid states batteries units, with or without FC on board chargers, would probably not need enroute charging but could be automatically serviced at night only, after a full day use.

The FC equipped units could probably be used on much longer trips.

'Larger' is not the same thing as 'more compact'.

But I don't know what is going on with this, and whether it is simply larger due to those packs apparently having more energy.

Solid state means solid electrolyte, they can still use cobalt.
They may be safer but might not charge as quickly.

Solid state battery characteristics are yet to be disclosed so this is still speculation; all we have now are hints, i.e., larger, can't be fast charged, etc. There's a long way to go before EVs are commonly provided as an affordable vehicle, including buses.
In any case the fact that Mercedes is selling electric buses is exciting in itself.

I see no reason why solid electrolyte batteries would be larger nor heavier.

.. I think he ment larger capacity

Apparently the solid state batteries Daimler is working on don't use cobalt.
I did not bother linking it before as it is a cursory reference and I was hoping someone had more, but here it is:

'Daimler said, adding it was also working on solid state batteries - which don’t require any cobalt - for future products.'

They don't have to have cobalt, but they can. It is a solid electrolyte, that is all. They can use lithium for the anode if they want, no restrictions.

he ment..
The word is "meant", say what you mean or don't comment.

Daimler is a part of a joint venture called EMBATT. Members of this joint venture are Fraunhofer, Daimler, Thyssen-Krupp and IAV. Embatt will enter mass production in 2020.
https://www.youtube.com/watch?v=l_glx79wJyE

Latest SS batteries have about 50% (with a possibility of 100%) more storage capability for the same weight as lithium units.

Have not found much information about Daimler Solid State batteries.
The current eCitaro bus uses an AKASOL battery with 37Ah Samsung SDI cells.
The battery module produces 24.5 kWh and the current bus now has 12 modules for 292 kWh total. If the new battery cell has 55 Ah then you would get 441 kWh.
The 37Ah Samsung SDI cells have around 165 Wh/kg, 55 Ah would require 240 Wh/kg (for a reference Tesla gets around 267 Wh/kg from the 2170 format cells).
The AKASOL battery uses Prismatic PHEV2 format so are not as energy dense as 2170 cells.
Solid State batteries that are Cobalt free would not be as energy dense, they could also use other cathode materials than Nickel Manganese, e.g. LiFePo.

I harbor the faint suspicion that EMBATT is implementing the chemistry discovered by INNOLITH. This is the only MFCR that I know of that has a pilot project running with cells that do just fine without cobalt and use a unconventional electrolyte. IOW, the new battery expected to emerge on the market in2020 is based on the architecture implemented from Fraunhofer and on the chemistry from INNOLITH. As stated, a suspicion.
https://insideevs.com/innolith-says-that-is-on-the-trail-of-1000-wh-kg-battery-energy-density/
INNOLITH is engaged in R&D only and EMBATT in manufacturing.

@yoatmon
A few comments about INNOLITH.
1. It is not a Solid State battery. It uses a liquid electrolyte. The electrolyte is not even special. It is lithium tetrachloroaluminate in thionyl chloride (SOCL2), the same electrolyte is used in high energy density Lithium Thionyl Chloride primary batteries. It is non-flammable, thoug toxic and requires special handling.
2. This is not the Grid battery sold to PJM by ALEVO and supposedly could last 40,000 cycles. That battery used a graphite anode and a thick Nickel foam cathode with the SOCL2 electrolyte.
3. The 1,000Wh/kg rechargeable battery uses a Conversion Reaction cathode, the same inorganic electrolyte, and probably a lithium metal anode. There is nothing special about Conversion cathodes certain metallic oxide, sulfide, or halide compounds can experience conversion reactions. Conversion cathodes have high Lithium storage capacity, but often undergo large structural change during delithiation, resulting in cycling instability. Brookhaven National Lab has modified Iron Fluoride that shows both high capacity and high cycling stability (check my earlier reference).
4. INNOLITH is a secretive company with very “creative” financing schemes. Original research was acquired by Fortu Powercell which went bankrupt after a setup with the State of Michigan failed. Reemerging as ALEVO, it set up a factory with the help of the State of North Carolina and went bankrupt.
5. The INNOLITH 1,000Wh/kg rechargeable battery is still in development as you pointed out and will not be ready in 2020. Anyway as I earlier stated the Mercedes eCitaro battery has relatively low energy density (240 Wh/kg) and could use many different types of cathodes with zero or low Cobalt content.

@yoatmon
It could be EMBATT.
Daimler AG is a partner in the EMBATT-goes-FAB project which has built a pilot plant (set up by Thyssenkrupp System Engineering) and Fraunhofer IKTS is manufacturing LTO-LFP bipolar electrodes on a pilot scale (reference: https://www.ikts.fraunhofer.de/en/departments/energy_bio-medical_technology/mobile_energy_storage_systems_electrochemistry/bipolar_lithium_ion_batteries.html).
Also, according to the EMBATT-goes-FAB project website, there are “investigations on the incorporation of polymeric electrolytes”.
This would then be a “Solid State” battery with no Cobalt and thanks to the bipolar construction would probably meet the energy density requirement of the 441 kWh battery.

For example, the current eCitaro bus uses 37Ah battery cells and 24.5 kWh per module (12 modules). The battery module weighs 230 kg. To get 441 kWh in 12 modules would require at least 36.75 kWh (lets say 37 kWh) per battery module or roughly 160 Wk/kg energy density. This is possible for the LTO-LFP battery if the bipolar construction lives up to the promotion. LTO-LFP batteries are already widely used in buses.

Of course, Daimler could always fall back on AKASOL using SK Innovation low Cobalt 2170 battery cells in the 37 kWh module.

Btw AKASOL already has available 50Ah 33 kWh battery modules that would give 396 kWH. Not sure about the cell supplier.

My Fraunhofer IKTS reference appears to have been truncated. Here is a better reference that shows the chemistry and the ceramic separator.
https://www.ikts.fraunhofer.de/content/dam/ikts/downloads/annual_reports/jb2015/43_Embatt_bipolar_battery_-_New_battery_design_for_higher_energy_density.pdf

OK this is the final reference which shows EMBATT 3.0 "Solid State Battery" here