The contract award, which includes a 50% cost share, funds a 30-month project that began last month. Building on a successful Phase 1, the goal of this program is to develop novel electrolyte formulations, a scalable pre-lithiation method that enables the use of high-capacity silicon oxide anodes, and optimized cell designs that will result in lithium-ion batteries capable of meeting USABC LC/FC EV battery goals. 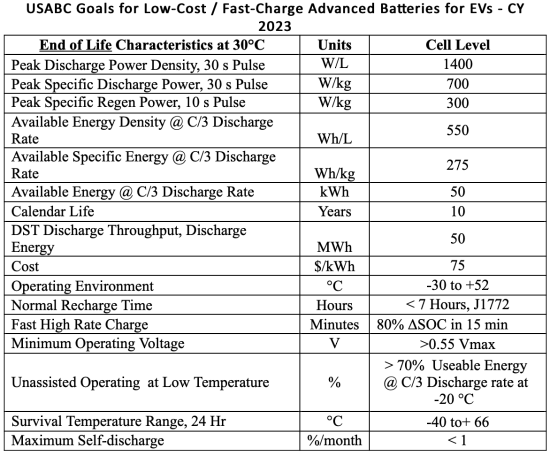 Already in partnership with the USABC, Zenlabs has developed an ultrahigh energy density cell targeted at EVs called Range. Range features a high-capacity SiOx anode paired with an NCM cathode.

USABC is a subsidiary of the United States Council for Automotive Research LLC (USCAR). Enabled by a cooperative agreement with the U.S. Department of Energy (DOE), USABC’s mission is to develop electrochemical energy storage technologies that support commercialization of hybrid, plug-in hybrid, electric and fuel cell vehicles.

In support of its mission, USABC has developed mid- and long-term goals to guide its projects and measure its progress.

So far USABC's contribution towards improved batteries has been notably very little or NIL?

What? Have you forgotten Envia Systems and one of it's founders Sujeet Kumar?
Guess who the CEO of Zenlabs is?

You expect knowledge or consistency from AlzHarvey, gryf?  The only thing you can expect him to do is support the propaganda his paymasters demand from him.

USABC standards and test protocol are followed globally. It is interesting that they want only a 50 KWh battery pack or 200 mile range car but they do want every cycle fast charge cycle. I guess choosing smaller battery pack size lowers cost sacrificing range. Price parity with ICE while spending same time at gas station?

See this for what it is; a give-away by Congress to the American automakers. This program has been funded for decades and administered by the auto companies.
I had hoped someone would have proven me wrong...not yet.

Incremental progress of lithium ion batteries!!! While ARPA-E funds moonshots; USABC funds technology nearing commercialization. USABC Awardees are selected after independent validation by national labs collecting data from same set of cells. Per this specs, initial Energy density of this cell is 330 Wh/kg assuming 20 % degradation or 275 Wh/Kg(End of life) after 1000 cycles. So this is the industry standard in 2019?

USABC is a paper enterprise/venture and has not produced improved batteries. It is more of a farce/scam lead by major USA ICEVs manufacturers. .

I would love to buy a 330 Wh/kg 1000 cycle cell if it exists but it better be from a reputable source like LG or Panasonic. You cant bet on startups. They would claim energy density of 500 Wh/kg but disappear when asked to meet power density, calendar life, -20C, 55 C and 20 other performance metrics that they probably never heard of. Claiming high energy density is easy (helps them raise capital!) but making a battery work in a car is meant for LGs of the world.