About 4 million children worldwide develop asthma each year because of inhaling nitrogen dioxide (NO2) air pollution, according to an open-access study published in The Lancet Planetary Health by researchers at the George Washington University Milken Institute School of Public Health (Milken Institute SPH). The study, based on data from 2010 to 2015, estimates that 64% of these new cases of asthma occur in urban areas.

The study is the first to quantify the worldwide burden of new pediatric asthma cases linked to traffic-related nitrogen dioxide by using a method that takes into account high exposures to this pollutant that occur near busy roads, said Susan C. Anenberg, PhD, the senior author of the study and an associate professor of environmental and occupational health at Milken Institute SPH. 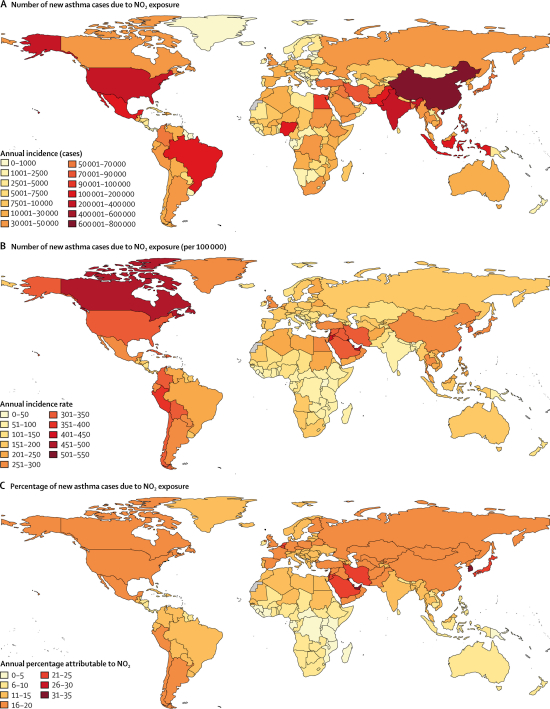 Our findings suggest that millions of new cases of pediatric asthma could be prevented in cities around the world by reducing air pollution. Improving access to cleaner forms of transportation, like electrified public transport and active commuting by cycling and walking, would not only bring down NO2 levels, but would also reduce asthma, enhance physical fitness, and cut greenhouse gas emissions.

In the new study, the authors used NO2 as a surrogate for the traffic pollution mixture to focus specifically on the effects of traffic pollution on childhood asthma development. NO2 is a pollutant formed mainly from fossil fuel combustion, and traffic emissions can contribute up to 80% of ambient NO2 in cities. NO2 is just one component of air pollution, which is made up of many pollutants (including particulate matter, ozone, carbon monoxide), which are known to have numerous adverse effects on health.

The authors combined a global dataset of ambient NO2 (modelled from ground-level monitors, satellite data, and land use variables such as road networks) with data on population distribution and asthma incidence to estimate the number of new traffic pollution-related asthma cases in children aged 1-18 years.

They were then able to estimate the number of new pediatric asthma cases attributable to NO2 pollution in 194 countries and 125 major cities worldwide.

Findings from the study:

Asthma is a chronic disease that makes it hard to breathe and results when the lung’s airways are inflamed. An estimated 235 million people worldwide currently have asthma, which can cause wheezing as well as life-threatening attacks.

The World Health Organization calls air pollution a major environmental risk to health and has established Air Quality Guidelines for NO2 and other air pollutants. The researchers estimate that most children lived in areas below the current WHO guideline of 21 parts per billion for annual average NO2. They also found that about 92% of the new pediatric asthma cases that were attributable to NO2 occurred in areas that already meet the WHO guideline.

That finding suggests that the WHO guideline for NO2 may need to be re-evaluated to make sure it is sufficiently protective of children’s health.

—Pattanun Achakulwisut, PhD, lead author of the paper and a postdoc at Milken Institute SPH

The researchers found that in general, cities with high NO2 concentrations also had high levels of greenhouse gas emissions. Many of the solutions aimed at cleaning up the air would not only prevent new cases of asthma and other serious health problems but they would also attenuate global warming, Anenberg said.

Additional research must be done to more conclusively identify the causative agent within complex traffic emissions, said the researchers. This effort, along with more air pollution monitoring and epidemiological studies conducted in data-limited countries will help to refine the estimates of new asthma cases tied to traffic emissions, Anenberg and Achakulwisut added.

Due to limited data availability, the NO2 levels used in this study are for 2010-2012, whereas the population and asthma incidence rates are for 2015. Given recent global changes in NONO22 levels (decreases in US and European cities, and increases in Asia), the estimates may not be exact and further research with the latest NO2 levels is needed.

Another excellent reason to phase out ICEVs at an accelerated rate?