Ford Motor Company is teaming up with Solid Power (earlier post) to develop all solid-state batteries (ASSB) for next-generation electric vehicles. The announced partnership will focus on further developing ASSBs toward automotive requirements.

This partnership will heavily leverage Solid Power’s first fully automated, roll-to-roll production facility, which is anticipated to be fully operational in Q2 2019.

ASSBs have the potential to provide greater energy, which translates to greater run-time per charge or in the case of an electric vehicle, greater range from a fully charged battery. By combining state-of-the-art cathodes with metallic lithium anodes, ASSBs can achieve up to a 50% increase in cell level energy vs. current lithium-ion cells while even greater energy improvements are possible with more advanced cathodes, which is an additional area of development for Solid Power. 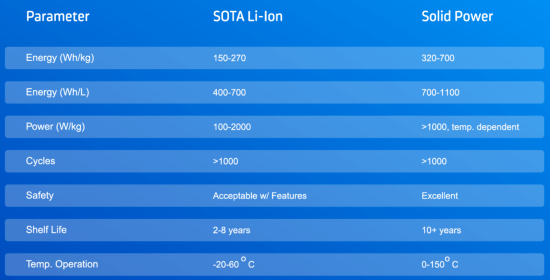 This latest news follows Solid Power’s announcement in September of 2018 that it closed $20 million in a Series A investment round.

Solid-state battery technology has the potential to help us deliver electric vehicles that are even safer and more capable. Our involvement with Solid Power enables us to further collaborate in an important emerging technology that could truly transform the design and integration of smart electric vehicles into tomorrow’s smart world.

If we assume they’re talking about Panasonic’s 250 Wh/kg cells used by Tesla, they’re suggesting 375 Wh/kg. The Table shows up to 700 Wh/kg. I wonder what time frame they are targeting for those parameters?

It would appear that the lower bound of 320 Wh/kg is implied in their production target of Q2 2019.

metallic lithium anode...
That will give you an energy density increase without solid electrolyte.

That's correct energy density increase is from the lithium metal anode. Sion Power has had a lithium metal anode battery cell with 500Wh/kg energy density for over a year. However, it used a liquid electrolyte and NMC cathode. It also only got 450 cycles. To get longer life you need the solid electrolyte.
To get to the 700 Wh/kg level you need Conversion Reaction cathodes.

One example of a Conversion Reaction cathode was posted in GCC, 15 June 2018,
about a modified iron trifluoride conversion cathode, reference: https://www.greencarcongress.com/2018/06/20180615-fef3.html. This article points to an open access article in Nature Communications.

This could become the grandfather of 5-5-5 batteries depending on performance evolution and lower mass produced price?

Cold weather operations may be a problem unless...?

gryf,
Good analysis and information.
Much more constructive than insults :)