Mitsubishi Motors Corporation (MMC) announced that the world’s first plug-in hybrid SUV, the Mitsubishi Outlander PHEV, has achieved sales of 200,000 units worldwide since its launch in 2013. 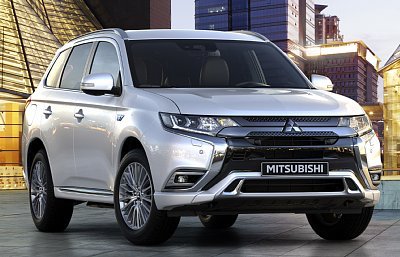 Developed from a fully electric vehicle, the Outlander PHEV has an architecture consisting of a front electric motor, a rear electric motor and no gearbox. It offers customers energy efficiency and a smooth driving experience.

Color me unimpressed.  I'm currently averaging 1.78 l/100 km per the trip computer in a vehicle that's already 6 years old.  However, the SUV can tow 1500 lb, so that's something.

An ideal vehicle for SUV lovers?

If the average vehicle was like it, the USA would be energy-independent; it would not even need all of its current petroleum production and natural gas could easily meet the increased demand for electricity.

It would also be far easier to decarbonize, because electricity is much easier and cheaper to make from zero-carbon energy sources than is any liquid fuel.

Basically agree with SAEP but where do you have zero-carbon energy from NG? Current NGPPs are no where zero emissions. REs, Hydro, Geothermal, Waves, Tidal and NPPs fall into that category?

where do you have zero-carbon energy from NG?

I'll break it up into syllables so you can understand:  "the USA would be en-er-gy in-de-pen-dent".  I did not say it would be zero carbon right off the bat.  OTOH, using NG-fired CCGTs could cut the added carbon emissions by about half over the current US mix.

The Outlander PHEV is a good car. I prefer my all-electrics, but it’s really well equipped for the price.

Also the only PHEV that has fast charging (other than the BMW Rex, a different kind of PHEV).

The limited tow capability as noted by EP is the only drawback I’ve encountered so far.

If you need a non-premium plug in SUV, this is the one.

Some studies have shown N.G. can be higher methane to CO2 than coal or petroleum owing to fugitive emissions.
The (gas) industry itself states in its operations manuals that leaks are not a concern unless they are major.
The less easily quantified question is what are the actual fugitive emissions from coal or oil? Ifthe question is never asked the answer is (conveniently) not counted.
Same goes for you beut co2 emissions from motorised personal transport that shows only 1/2 at best the actual on road carbon emissions.
As long as we only consider the end use or 1st or second degree of seperation we can see almost any shade of lipstick.

That's not a criticism of Mitsubishi or their effort when so many get the guernsey for not bothering to try.