Volkswagen is expanding its electric ID. product range with a multi-variable all-round model: the new ID. ROOMZZ—a zero-emission SUV in the five meter category. Volkswagen will present the concept car as part of a world première at Auto Shanghai (18 to 26 April) in an homage to China, currently the largest market for zero-emission vehicles. The series version of the ID. ROOMZZ—which follows on the more compact ID. CROZZ—is scheduled to take to the road from 2021. 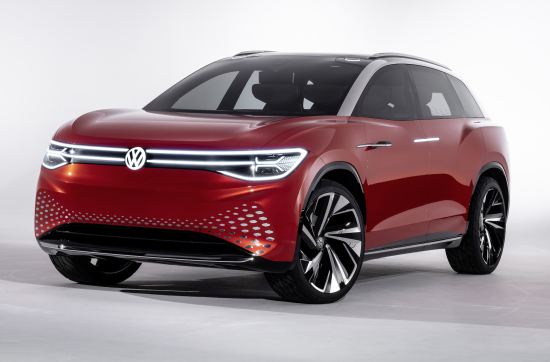 Alongside the ID. ROOMZZ, the ID. CROZZ and the compact ID. (all set to have a market début in 2020), other members of this new electric vehicle family include the iconic ID. BUZZ van and the avant-garde saloon ID. VIZZION (both will make their market début in 2022).

The Geneva International Motor Show in March was a chance for Volkswagen to unveil its new ID. BUGGY, an open beach cruiser that could be released as part of small series production with external partners. As is the case with all ID. models, the new ID. ROOMZZ is based on the modular electric drive matrix (MEB). 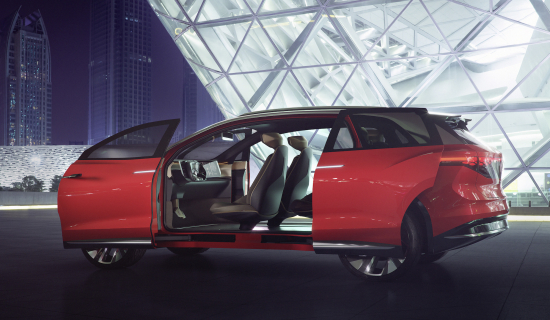 The rear axle provides propulsion as standard. An electric propshaft distributes the power of the 4MOTION four-wheel drive between the front and rear axles within fractions of a second once this becomes necessary due to driving dynamics. In addition, the ID. ROOMZZ can be continuously driven in four-wheel drive mode. 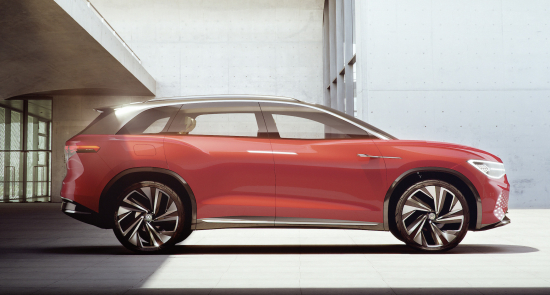 In addition, the ID. ROOMZZ can be continuously driven in four-wheel drive mode. Both motors are supplied with energy by an 82 kWh lithium-ion battery pack in the vehicle floor. The ID. ROOMZZ can accelerate to 100 km/h in 6.6 seconds; the maximum speed is capped at 180 km/h (112 mph). The range of the concept car in the NEFZ cycle (China) is up to 475 kilometers (295 miles), while in the European WLTP cycle the maximum range is 450 kilometers (280 miles). The battery is charged via an inductive interface. Conventional charging via a plug is also possible.

IQ.DRIVE. The ID. ROOMZZ combines its IQ.DRIVE systems, enabling the concept car to navigate traffic all by itself (fully automated) as desired. Volkswagen is consolidating all assistance systems and technologies involved in autonomous driving under the umbrella brand IQ.DRIVE. 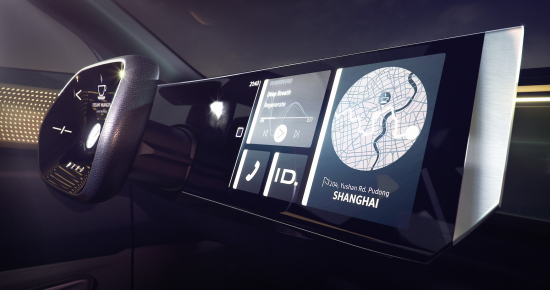 It is simple to switch from the manual “ID. Drive” mode to the fully automated “ID. Pilot” mode: All the driver has to do is place his or her hand on the VW logo on the steering wheel for at least five seconds—from this moment on, the computer of the ID. ROOMZZ assumes control of the vehicle.

The new “IQ. steering system” developed by Volkswagen engineers disconnects the steering column, moves the steering wheel to its off-position and thereby provides more space in the cockpit area. When drivers want to reassume control, they again press on the VW logo. The steering wheel now moves out again and is synchronized with the position of the wheels.

Only when the driver touches the capacitive steering wheel is the steering column reintegrated into the steering system—from this moment on, the driver must steer the vehicle themselves. In this way, maximum safety can be guaranteed when transferring vehicle control from person to machine and back again.

The fully automated mode (level 4) allows completely new configuration options for the integrated seats, which effectively turn the interior into a lounge.

Overall, there are three different seating modes en route that correspond to the relevant driving mode. In the manual “ID. Drive” mode, the seats are covered with the new “AppleSkin” (artificial leather that contains 20% vegetable matter), typically face forward while the backrests are up. If the driver switches to the fully automated “ID. Pilot” mode, each seat can be rotated inward 25 degrees to enable a more communicative lounge-like atmosphere on board. When driving is fully automated, the driver can activate “ID. Pilot Relax” mode, in which every passenger can tailor the position of the seat to suit them—from a standing to a reclined position in this mode. The series version of the ID. ROOMZZ will have up to seven seats.

The digitalized steering wheel is conceptually integrated into the panel. As well as sensitive touch-screen areas, it has a 5.8-inch display that shows relevant information such as navigation instructions in autonomous mode. There is also an Augmented Reality (AR) head-up display which projects navigation instructions in the virtual space in front of the ID. ROOMZZ, enabling the system to show pictograms such as an arrow sign in the visual field where the driver has to turn off.

The new “ID. Light” is also integrated beneath the windshield—this is an interactive light strip between the A-pillars through which the driver and guests obtain additional information.

Information regarding the assistance systems, navigation, and air quality (CleanAir system) are displayed via the light effects in this LED strip. At the same time, corresponding information is provided via “ID. Light” in the doors and roof area to provide the front-seat passenger and passengers in the back with information.

Clean air in all conditions. A CleanAir system uses an active filter system to ensure that the air inside remains clean even if the ambient air isn’t. The driver and front-seat passenger can also access various pre-configured atmospheres such as “Breeze” or “Forest” via the infotainment system. The corresponding menu also provides information regarding air quality in the vehicle (air quality index) and current system activity.