Year-over-year, US greenhouse gas emissions were 0.5% lower in 2017 than the prior year (after accounting for sequestration from the land sector), and power sector emissions fell 4.2%, according to the 2019 edition of the US Environmental Protection Agency’s (EPA) annual report on greenhouse gas (GHG) emissions. 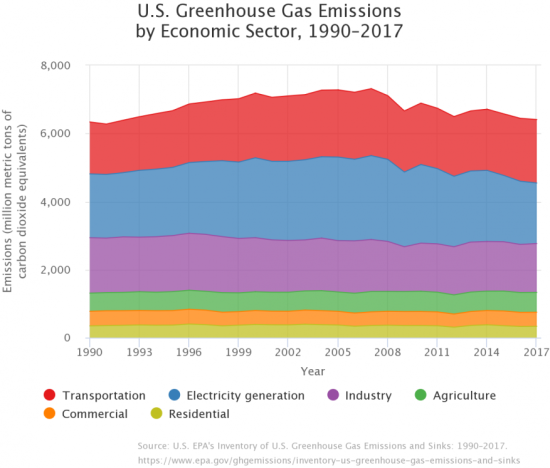 This decrease was largely driven by a decrease in emissions from fossil fuel combustion, which was a result of multiple factors including a continued shift from coal to natural gas and increased use of renewables in the electric power sector, and milder weather that contributed to less overall electricity use. 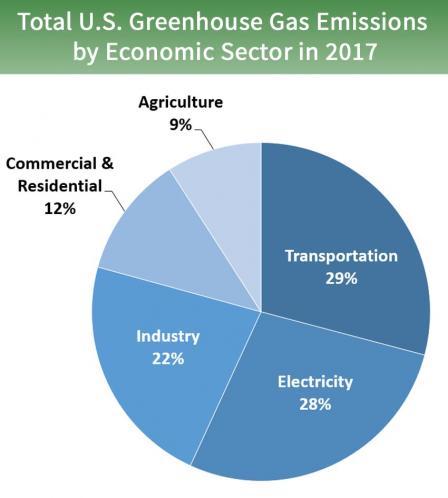 In terms of the overall trend, from 1990 to 2017, total transportation emissions have increased due, in large part, to increased demand for travel. The number of vehicle miles traveled (VMT) by light-duty motor vehicles (passenger cars and light-duty trucks) increased by 45.9% from 1990 to 2017, as a result of a confluence of factors including population growth, economic growth, urban sprawl, and periods of low fuel prices. 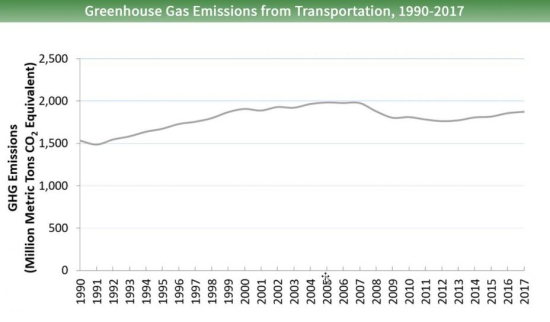 The gases covered by the EPA inventory include: carbon dioxide, methane, nitrous oxide, hydrofluorocarbons, perfluorocarbons, sulfur hexafluoride and nitrogen trifluoride. The inventory also calculates carbon dioxide emissions that are removed from the atmosphere by “sinks,” e.g., through the uptake of carbon and storage in forests, vegetation and soils.

This annual report is prepared by EPA in collaboration with numerous experts from other federal agencies including the US Department of Energy’s Energy Information Administration, US Department of Defense and US Department of Agriculture; state government authorities; research and academic institutions; and industry associations.

The transport sector is now the main culprit, mainly from larger heavier ICEVs.
The switch from coal to NG and the installation of more REs has been beneficial for the power generation sector. The other sectors will have to do better.

The pie chart breakdown by sector is illuminating; between transport and the electric sector, 57% of US carbon emissions are accounted for.

This suggests that a strong effort to decarbonize the electric sector with simultaneous electrification of the transport sector could take a huge chunk out of those two wedges.  Renewables are not reliably available to charge EVs and hypedrogen storage for them is far too lossy, so their usefulness in this effort is minimal.  However, a large increase in electric demand is made to order for a build-out of nuclear power.  Reliably available electric power is required for industrial society, and the addition of a large amount of load which can be shifted to the overnight hours is a marriage made in heaven for a new fleet of AP1000s.

If the electric sector can be 100% decarbonized and the transport sector 2/3 decarbonized by electrification, that takes 47% of total CO2 emissions out.  If electrofuels can get the other 10% in the transport sector, that's it for that.  If you can get half of commercial and residential using electric space heat and electric DHW, you're down to 37%.  Getting 2/3 of industrial using electric power for e.g. process heat cuts an additional 14%, bringing the total down to 23%.  This is just a stone's throw from the 80% reduction we need to stabilize atmospheric CO2 levels.

If we need further reductions we have options on the table.  Going with biofuels with carbon sequestration can knock off at least 500 million tons of CO2 per year.  NetPower is on track to produce 25 MW with a carbon-capturing power plant this year and such plants burning methanol or DME made from biomass are just the thing for zero or negative net carbon peaking generators.

If there's a niche for the unreliable energy from renewables, it's in the generation of energy for long-term storage.  Hypedrogen is a boondoggle, a deliberate attempt to fail so that fossil fuels will never be replaced.  Generating liquids which can be transported like petroleum and LPG and stored in large tank farms gets almost no attention.  This emphasis must be reversed.

All well and good; How if we could just break up the stranglehold the Trump/Republicans/fossil fuel companies have on Washington, maybe we could carry out EP's ideas. Tell your friends and family, everybody, to turn the rascals out next election.

Nice try.  The Democrats under Alexandra Ocrazyeyes-Cortex are solidly for the "Green New Deal" which is guaranteed NOT to work.  This should be no surprise, because the whole Green movement is a front for the fossil fuel industry to get rid of nuclear energy.

The Nuclear industry shot itself in the foot with exorbitant long delays, sky high initial cost, bad site selection and inadequate spent fuel long term management. Even China has not been able to solve those four (4) major problems associated with NPPs. A multitude of smaller nuclear units could help but will not solve all 4 issues.

Large/medium/small RE sites/farms can be built about 10 times faster at about 1/10 the initial cost on unused roofs/land /sea areas. The large batteries installed in future 2+B electrified vehicles (together with fixed storage units) could/will have the capacity to store enough energy to make most REs 24/7. .