Volkswagen is planning an extensive model offensive in China; the brand will double its SUV range by 2020. During Auto Shanghai 2019, Volkswagen announced that the share of SUVs is expected to rise to up to 40%.

Volkswagen is targeting the traditional part as well as the growing e-mobility sector. The Volkswagen brand presented five new SUVs, four of them as world premieres. SAIC VOLKSWAGEN showed the T-Cross and the soon to be launched Teramont X, FAW-VW the SUV Coupé Concept and SMV Concept. Besides the four models of the joint ventures the latest member of the ID. Family celebrated its world premiere: the ID. ROOMZZ (earlier post). 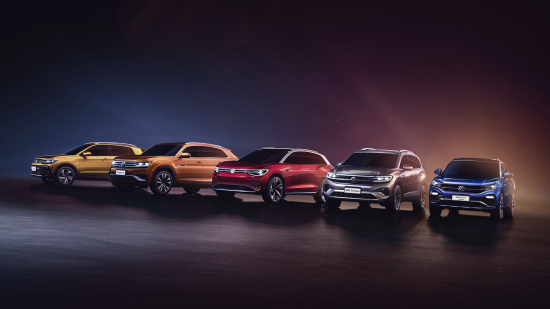 Volkswagen is entering the second year of its Move Forward brand initiative in China.

Volkswagen is reinventing itself. We will become even more adventurous with the design and body styles of our cars, while at the same time bringing exciting technology and a choice of new energy vehicles.—Stephan Wöllenstein, CEO of Volkswagen Group and Brand China

Wöllenstein expects the revitalization of the Chinese market especially after the lowering of the sales tax.

The T-Cross was launched on 11 Apri as the fourth SUV of SAIC VOLKSWAGEN.

The SMV Concept indicates a large-size SUV, measuring more than 5.1 meters and a wheelbase close to 3 meters. It will be a flagship for FAW-VW Volkswagen.