AMPLY Power: Top 25 US cities could save avg. 37% on fuel costs by switching to electric vehicles and buses; up to 60% with managed charging

A white paper by AMPLY Power, a company providing fleet charging as a service, finds that 25 of America’s largest metropolitan areas could save an average of 37% on fuel costs by electrifying their bus and light-duty vehicle fleets.

Additionally, well-managed electric fleets that optimize electricity charging for off-peak hours and avoid demand charges can save as much as 60% on fueling versus their internal combustion engine (ICE) or unmanaged EV fleet counterparts. 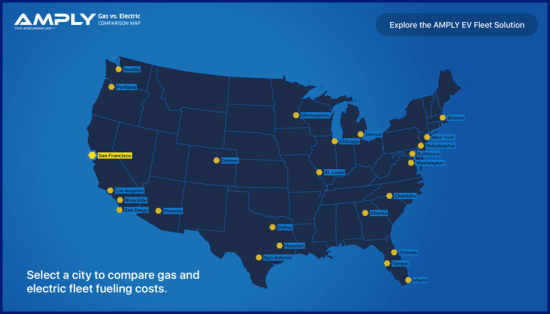 The cost-savings for commercial electrification are real and tangible. Until now, the entire electrification ecosystem, from utilities and regulators to fleet operators, has lacked a standard metric to showcase this economic value.

Alongside proving the economic benefits found in fleet electrification, the innovation of the dollar per gallon-equivalent metric provides stakeholders the clarity to assess, plan, and budget for electric fleet transition and accelerate the industry beyond the pilot phase to full deployment.

Unlike gasoline or diesel fuel prices, electricity prices can vary significantly on a kWh basis. For commercial / industrial users, the three basic components of an electric bill are: energy charges, demand charges, and fixed charges.

In the study, AMPLY suggests that rates structures in the Top 25 Metros are best understood by comparing two cities with drastically different rate design: Atlanta and San Francisco:

In the study, AMPLY Power assessed the DPGe for the top 25 US metropolitan areas and identified significant commercial and regulatory implications of fleet electrification.

For example, electric bus fleets achieve significantly lower fuel costs by switching from ICE to electric, with managed charging, in all 25 of the largest US cities. Portland, Oregon leads these savings with 82% savings by making the switch, followed by Tampa, Florida at 79%, and Seattle, Washington at 78%. Even Detroit, Michigan—with the highest DPGe for city bus fleets—yields 12% fuel savings.

Similarly, light-duty EV fleets can also realize a lower fuel cost transitioning from internal combustion engine (ICE) fleet vehicles to electric in 19 of the top 25 US cities. Portland, Oregon leads this segment again at 69% savings, followed by Seattle, Washington at 63%, and San Francisco/Oakland, California at 62%.

When state-mandated programs serve as the basis for fleet electrification discussions, it’s easy for fleet professionals to start from a focus of sustainability, rather than targeting the repeatedly proven economic and business advantages of electric fleets.

Optimizing fleet electrification programs to maximize fuel savings still requires planning and due diligence based on a fleet’s location and other factors. While this may seem complex, we challenge fleet operators to embrace these intricacies, and realize the real economic value in switching to electric.

Methodology of the DPGe metric. The DPGe compares the electric dollar per gallon-equivalent of gasoline (or diesel) for specific cities. Used as a forecasting tool for EV charging, the DPGe incorporates regional-specific electricity rate structures, fleet-specific charging strategies, and vehicle class efficiencies into a single, comprehensible metric that can be used to assess, plan, and budget for an EV fleet transition.

The analysis seeks to simplify complex energy rate structures and electric vehicle efficiency metrics into a single figure that Americans know and use daily—the dollar per gallon of gasoline. Due to the complexity of electricity rate structures and vehicle fleet requirements, AMPLY has provided a range for this DPGe figure.

The research details the difference between operating a fleet without managing the EV charging or having a suboptimal charging strategy that doesn’t take advantage of all the options available, and a managed fleet using an optimized charging strategy. A managed strategy takes into account factors such as peak-pricing, utility demand charges, and time-of-use rates to determine the most cost-effective charging schedule. Conversely, an unmanaged strategy does not optimize charging for pricing.

Savings realized from EVs can easily be torpedoed if a fleet is charging at peak rates, or charging activities trigger demand charges. For instance, in New York City, it could be more costly to transition a light-duty fleet without a managed charging strategy. However, with management, a transition could yield almost 20 percent savings. This finding illustrates both the opportunity and the risks associated with fleet electrification, and why managed charging is vital to ensuring the full economic benefits.

—Simon Lonsdale, head of sales and strategy at AMPLY Power

California's scheme is backwards.  California has so much unreliable generation that it has had to pay Arizona to take its excess but there's no provision in any of the time-of-day rates that I can find to encourage local use of those surpluses.  SMUD summer business rates go to peak pricing just when the PV surplus is at its maximum, discouraging demand when it should be promoted.

You know someone is profiting from this, but it sure isn't the California consumer.

“You know someone is profiting from this, but it sure isn't the California consumer.”

California's three stock owned utilities are monopolies and driven by Wall Street's ever applied pressure of increasing profits...We all know the time of use meters and tiered rates are a scheme to justify higher profits...which is the purpose of a stock company...as these monopolies are presently organized, they will always be trying to increase rates.

California currently has an unique opportunity to re-organize PG&E as a not for profit utility...We will see how interested the new Governor is in working for the people based on what comes out of the reorganization of the PG&E monopoly. My hope is they create a series of community power authorities from PG&E and not let it continue to operate from bankruptcy to bankruptcy.

SCE charges 19/28/43 cents per kWh depending on usage.
They screwed up on their nuclear plant, rate payers pick up the tab.

The relative price of electricity as of 1st April 2019:

The average price of electricity varies a lot from place to place. The highest prices seem to be where it is fully or partly privatized.

If you remember Enron in 2000 you saw what private sector con jobs can do to a stable market. That one company really messed the power industry up big time.

They screwed up on their nuclear plant, rate payers pick up the tab.

SCE closed the plant because they didn't think the government would allow them to run it long enough to recover costs if they fixed it.  If you didn't keep electing governments that try to kill nuclear power, you wouldn't have this problem.

“SCE closed the plant because they didn't think the government would allow them to run it long enough to recover costs if they fixed it. ”

...so you’re saying if it hadn’t broken down it might still be productive? Diablo Canyon hasn’t broken down and is licensed for another 10 years but is scheduled for shutdown.

Hinkley C and Vogtle 3&4 are financial failures that are embarrassments. NuScale is probably nuclear’s best near term hope and they won’t be ready until 2025 at the soonest.

USA, France, UK, Russia, Ontario and a few other countries with older NPPS, approaching or at 60 years or operation, have difficult decisions to make.

...so you’re saying if it hadn’t broken down it might still be productive?

Pay attention, AlzHarvey:  I said “SCE closed the plant because they didn't think the government would allow them to run it long enough to recover costs if they fixed it.”  What this means is that SCE could have repaired SONGS well enough to run well past its licensing period and made a profit, but the California anti-nuclear mafia would have forced it to NOT be re-licensed for another 20 years.  If the license could not be extended the repair would lose money, and shutting down was indicated.

This is not a technical or ecological decision.  This is a POLITICAL decision, and the pressure put on Diablo Canyon to shut down well shy of its license period proves that SCE read the tea leaves right.  If California gave a damn about ecology both SONGS and Diablo Canyon would be pushed to 80-year lifespans.  It does not; it is run by fossil-fuel interests.


Diablo Canyon hasn’t broken down and is licensed for another 10 years but is scheduled for shutdown.

Indeed.  THINK about this (I know you can't).  Why shut down a (a) carbon-free generator that (b) is mostly paid for and (c) helps IMMENSELY in meeting state GHG emission goals?  Why, because Jerry Brown's daughter sits on the board of natural gas company SEMPRA and he and his father have been making tons of money from Indonesian and other oil since he first bought his way into the governorship of the state, of course!  The Browns are a crime family.  I suspect the Newsoms are also.


Hinkley C and Vogtle 3&4 are financial failures that are embarrassments.

Precious little concrete has been poured for Hinkley C, though there are 4 other EPR units either completed (China) or under construction (Olkiluoto, Flamanville) to prove the concept.  Vogtle 3 and 4 are going to completion (FOAK in the USA) and 4 more AP1000s (Sanmen 1 and 2, Haiyang 1 and 2) are already in commercial operation in China.

NuScale looks great but we won't know for sure until the first half-dozen units have been built and put into operation.