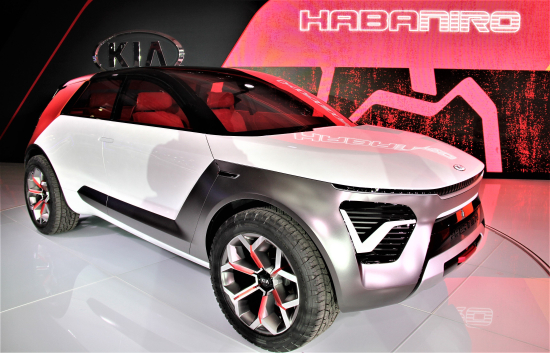 We wanted this concept to be comfortable navigating city streets, carving turns on a coastal road and off-roading with confidence to remote wilderness adventures. We imagined a car for everyone and nearly everything. Then, when we saw the finished product, we were blown away by the imagination of the HabaNiro’s creators and its laboratory of technology and we want it in our driveways. Today.

The HabaNiro is a compact crossover utility vehicle in terms of existing industry category language. Kia, however, says that the concept is essentially an all-electric Everything Car or ECEV—commuter, crossover, sport utility, state-of-the-art technology workroom and adventure vehicle.

When HabaNiro’s part-time level-five autonomous driving system is engaged the steering wheel and instrument panel retract forward to provide more room for the front occupants. Media or other entertainment, such as a movie for a long highway haul, can be displayed on the full-width HUD video system.

HabaNiro features Kia’s new Real-time Emotion Adaptive Driving (R.E.A.D.) System introduced earlier this year at the Consumer Electronics Show. R.E.A.D. can optimize and personalize a vehicle cabin space by analyzing a driver’s emotional state in real-time through artificial intelligence-based bio-signal recognition technology. The technology monitors the driver’s emotional state and tailors the interior environment according to its assessment—potentially altering conditions relating to the human senses within the cabin and in turn creating a more pleasurable and safer driving experience.

R.E.A.D. also enables the HabaNiro’s Eye Tracking System (ETS) with 180° rearview video display. The system uses AI-based emotional intelligence to monitor when the driver looks up to the top of the windshield where conventional rear view mirrors are traditionally located. The AI immediately senses the driver’s need to see behind the vehicle and instantly activates the 180° rearview video display.