Total OECD annual production of crude oil, natural gas liquids (NGL), and refinery feedstocks increased by 10.3% in 2018 compared to 2017, reaching a record total monthly production of over 100 million tons at the beginning of the year and remaining above this for almost all of 2018, according to the IEA. This trend was observed across all OECD regions with the OECD Americas seeing the largest growth (+12.2%), followed by OECD Europe (+0.6%) and OECD Asia Oceania (+2.5%) in absolute terms. 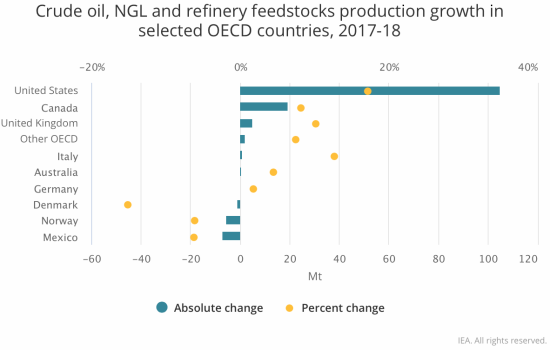 The United Kingdom experienced the largest growth in production in OECD Europe (+10.1%) due to multiple new projects on the United Kingdom Continental Shelf coming online in late 2017. Italy also experienced significant growth (+12.6%), reflecting the re-opening of facilities in the Val d’Agri region which was closed in mid-2017 due to leaks from on-site storage tanks. Within OECD Europe, the growth in Italy was partially offset by declines in Norway (-6.2%), where several fields were under maintenance in 2018. Production decreases in Norway are also due to natural production declines from mature fields that are not being compensated by new fields coming online.

Growth in production in OECD Asia Oceania was driven by growth in Australia (+4.4%), where the production of condensates increased due to new LNG projects coming online.

The OECD Americas was responsible for 85% of total OECD production of crude oil, NGL and refinery feedstocks in 2018, with 56% of this being produced in the United States.

Within OECD Europe, the largest decline in refinery output was observed in Germany (-4.4%). This was mainly due to an explosion in the Bayern oil refinery in September 2018, which led to a decrease in production levels for this last quarter of the year. This was also compounded by maintenance activity in several other refineries throughout 2018. A large decline was also observed in France (-5.9%) due to increased maintenance activity in the second quarter of 2018. Decreases in the output of all products were observed in OECD Europe.

OECD Asia Oceania’s decrease was driven by Japan (-4.9%) due to a combination of scheduled maintenance programs and the unscheduled shut-down of the Hokkaido refinery following a large earthquake in September. Growth in both Korea (+2.5%) and Australia (+12.6%) was able to offset the drop in Japan, and there was an increase of output of all other products (+2.6%) in the region as a whole. 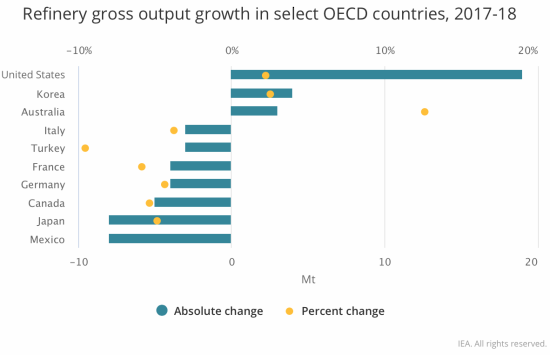 Total imports of crude oil, NGL and refinery feedstocks to individual OECD countries were 2.7% lower in 2018 compared to 2017, with all OECD regions contributing to this decline. OECD Europe experienced the largest decline in imports (-3.0%), followed by the OECD Americas (-2.7%) and OECD Asia Oceania (-2.0%).

Overall OECD imports of crude oil, NGL and refinery feedstocks from Iran and Russia decreased significantly by 41.6% and 9.8% respectively, while imports from the United States grew by 55.1%. Imports from Saudi Arabia also decreased (-2.8%), however it was the largest exporter to the OECD in 2018, taking the lead from Russia which was the largest supplier to the OECD in 2017.

Total imports of total products to individual OECD countries increased by 3.1% in 2018 compared to 2017. Growth was observed in both the OECD Americas (+11.0%) and OECD Asia Oceania (+6.1%), while OECD Europe experienced a slight decline (-0.5%). Most notably, imports of other kerosene increased across all OECD regions, by 18.1% in total.

Overall, the OECD continues to be a net exporter of refined products, but exports remained relatively stable in 2018 compared to 2017 (+0.3%). Exports of crude oil, NGL and refinery feedstocks increased by 13.3% in 2018, with the largest volumes destined for the United States and the Far East.

Growth in the OECD Americas can be attributed to higher deliveries of gas/diesel oil (+4.8%), where the most notable growth was in the United States (+5.1%) and Canada (+3.8%) due to a particularly cold winter. The OECD Americas also saw a large decrease in the demand of naphtha (-13.6%).

OECD Asia Oceania experienced similar trends to the OECD Americas, with the largest increase in deliveries being for gas/diesel oil (+1.5%) and the largest decrease being for naphtha (-5.5%). The trend for gas/diesel oil was driven by Australia (+6.9%), while Korea (-5.4%) and Japan (-5.5%) were responsible for the decreases in demand of naphtha in the region.

Total OECD stocks of total oil on national territory remained broadly unchanged in 2018 compared to 2017 and closed at 531 million metric tons. A stock build was observed in the OECD Americas (+1.0%), and was balanced by stock draws in both OECD Europe (-1.2%) and OECD Asia Oceania (-1.0%).

In the OECD Americas, stocks of total oil on national territory grew by 2.3 million metric tons due to increases in both primary products (+1.7 Mt) and secondary products (+0.6 Mt). This was despite large drawdowns of United States crude stockpiles at the Cushing, Oklahoma storage hub in the first quarter of 2018.

Stocks of total oil in OECD Europe decreased by 2.2 million metric tons, due to large stock draws of refined petroleum products (-2.6 Mt). The largest decrease was observed in Germany (-0.5 Mt).

Too much fossil fuel being used in most industrialised countries. The environment and living creatures cannot adapt to that fast increase in the level of pollution and GHGs.

If this trend continues, many coastal cities/areas will be under water by/before the end of the century?

More droughts and lower crop yields will hit before the end of this century.

SJC, do you know that is just speculation?
The data so far show the opposite:
https://www.nasa.gov/feature/goddard/2016/carbon-dioxide-fertilization-greening-earth

CO2 only takes you so far.  When warming leads to drought, productivity goes down regardless.

Steve,
This is not the forum for GW, it is about sustainable mobility.

SJC,
You are the one that started commenting about crop yields.
Also, a link to an IPCC report or at least a peer reviewed paper would be much more convincing than a link to an advocacy organization.

Steve,
It was a response to the statement,
"will be under water "
I was showing there is more than rising seas to be concerned with.
Go find you own papers, then take the links to another site.

Climate changes are not distributed evenly but they are happening.

Many of the H-Q 63 water reservoirs are full and overflowing and can no longer be used to reduce the flow. The Hydro production surpluses are growing with higher water levels but …...