Number of vehicles in the United States: Did we reach the peak in 2006?

The present study analyzes corresponding changes in the number of vehicles during the same period. The focus is on vehicles per person, as opposed to the absolute number (which depends, in part, on the continuously increasing size of the U.S. population).

The results are shown in the chart below. 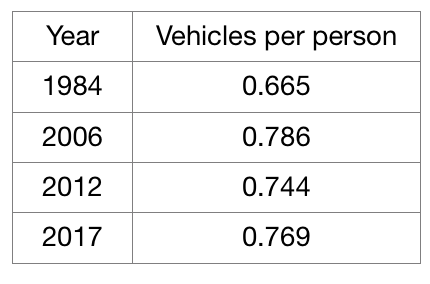 The sharp drop was mainly in 2008/2010 mini depression with increases in the next 6 to 7 years. We could have another peak by 2022/2025, or whenever BEVs become competitive with ICEVs.

".....or whenever BEVs become competitive with ICEVs."
That depends entirely at which level you place competitiveness.
The e-Golf I drive is sufficient for all my commute distances with a max. range of approx. 160 miles.

The new all electric Buick, made in China for the local market, will sell for less than $25K and will be competitive with equivalent ICEVs.

Assuming faster evolution in EV batteries, performance and initial price, many EVs (specially those built in China) could become competitive by 2024/2026, especially with the current $13K (CAN) subsidy for BEVs and FCEVs.