In the 1990s and early 2000s, fuel economy decreased while vehicle weight increased. In recent years, however, light-duty vehicle manufacturers have employed advanced technologies to improve both performance and fuel economy.

As a result, average fuel economy for all light-duty vehicles produced has improved nearly every year since 2004, and in 2018 rose to a record high of 25.4 miles per gallon, according to the US Department of Energy (DOE).

Despite a 128% increase in horsepower and 49% improvement in acceleration from model year 1980 to 2018, the overall fuel economy of light-duty vehicles improved 32% during that period. The data are based on production-weighted averages. 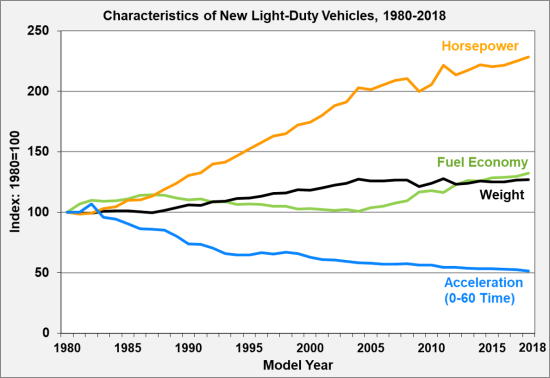 The truth is that NO fuel economy was achieved for the last 14 years (2004 to 2018) due to the extra weight, more HP and better acceleration.

The US has the safest vehicles and the cleanest vehicles (for CO, HC, NOx emissions). They could be lighter and slower, but the consumer chooses larger and faster. SUVs are very popular but have more drag and electrified vehicles are available but are a small part of sales. Stiffer regulations could force vehicles that are liked less but use less fuel or high fuel prices could swing the market as well. The fuel economy gains since about 2004 are substantial in any case.