A new study carried out by University College Dublin (UCD) academics has found that under typical Irish commuting conditions, the Toyota Prius IV (fourth-generation) hybrid (earlier post) drives in zero emissions mode (ZEV) for significantly more than half (62%) of the time and more than 40% (40.4%) of the distance covered. 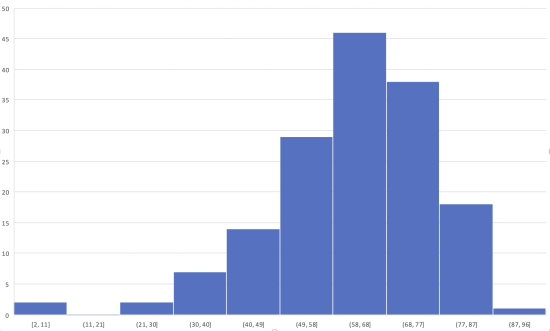 ZEV mode distribution. The horizontal axis depicts the range of time percentages spent in ZEV mode, and the vertical axis captures how many trips fell into this category.

The research consisted of recording and analyzing commuting data from seven volunteers—all of whom are employees of University College Dublin. Each volunteer was supplied with a Toyota Prius IV hybrid vehicle (Prius + Luxury grade with 17" wheels and a full suite of premium features) for one calendar week during November 2018. The overall test data was built from an ensemble of 157 individual trips, which when aggregated together, cover 2,018 km.

With the exception of GPS information, all measurements, including fuel consumption, were obtained directly from the standard Toyota sensors and on- board computer systems.

Other key findings of the study:

Overall, the results indicate that in sample Irish commuting conditions, the Toyota Prius IV hybrid car may be in ZEV mode for a very significant portion of its travelling time and distance, suggesting meaningful air-quality related benefits for pedestrians and cyclist as compared to conventional combustion engine vehicles.

The routes reflect typical Irish commuting conditions. The researchers measured the time the cars spent in zero emissions mode versus internal combustion mode. No restrictions or driving guidelines were given to the drivers.

This is the first study of this type carried out in Ireland, and we anticipate its results would be replicated across the country and also across the range of newly launched Toyota hybrid models. It conclusively shows that our self-charging hybrids are in zero emissions mode for well over half of their journeys, including on long drives. It underlines the fuel economy and positive environmental impact that self-charging hybrids can bring to society with reduced CO2 and improved air quality, which, in turn, can deliver significant health benefits for cyclists and pedestrians traveling the same routes.

Self-charging hybrids have a significant role to play in decarbonizing the car fleet and in delivering electrified driving to the Irish consumer. It’s clear that hybrids deliver societal benefits for both rural and urban drivers. These cars do not need additional infrastructure or behavioral change from drivers. In a country with over 2 million cars with combustion engines, there are clear and tangible benefits from self-charging hybrids that drive 60% of the time in zero emissions mode.

According to Toyota, Ireland has been something of a laggard in Europe when it comes to adopting alternative powertrains.

The majority of new car sales continue to be of conventional combustion engine type. While battery electric vehicles (BEVs) are growing in popularity, it will be quite some time before they can be considered fully mainstream given concerns about range limitations and inadequate recharging infrastructure, together with lack of available models and supply constraints.

However, our self-charging petrol electric hybrids have no such limitations. They provide an electric driving experience to suit almost any user and with no requirement for additional infrastructure. They are therefore the means to an urgent democratisation of electrification for the private car.

Toyota is the first vehicle manufacturer to have removed diesel passengers cars from its line-up; this year more than 80% of its car sales in Ireland will be self-charging hybrid models.

The Prius IV is the first production iteration of both Toyota’s fourth generation hybrid powertrain and of its new global architecture. Toyota Ireland has announced it intends to commission similar tests later this year with the new hybrid models that are being launched through the first months of 2019.

It seems incredible that 40% of the distance covered is in ZEV mode - some of the commutes are quite long.
I can understand why 60% of the time is in ZEV mode (Dublin traffic congestion) - but distance - please explain - does it coast every so often on the motorway ?

Ever heard of Pulse & Glide? Traffic is never at fixed speed, there are always accelerations and decelerations, even if the small one, there still are. And also at the fixed lower speed Toyota hybrid will first use battery, when battery is depleted the engine will come on and force charge it, when battery is at certain level the engine shuts down and again drives in EV mode.

Of course at times when the engine is ON, it uses more fuel than it would normally use for propulsion alone, but engine efficiency under load is so much better, that this comes out as fuel saved .

Good but not good enough!

As a 6-year owner of a Fusion Energi, I can tell you how the 40% of distance works.  The engine shuts off on downhill grades and whenever slowing in traffic.  When the engine re-starts it operates at higher load and achieves higher efficiency.

Since I'm driving a plug-in I travel closer to 75-80% of my mileage with the engine off, but the principle is the same.

EP:
Is your next car a hybrid also?

When I get my next car, I'll be able to say.  I had my eye on the Mitsubishi Outlander PHEV but the lack of third-row seating was a deal-killer.  I'm not in the market yet but I am keeping abreast of the options.

It is a pity Toyota don't have a potted pulse and glide mode where the car does it for you.
Any idea what the mph range should be - 3, 5, 8 mph ?
It would be rather annoying following one of these cars, but you can see the benefits.
Also, if you go from say 1 kwH to 2 KwH batteries, how much benefit can you get?

mahonj: It doesn't need to vary speed to pulse and glide, though.

Pulse and glide in a conventional ICE vehicle is done to optimize engine load versus vehicle power demand. ICEs are most efficient at relatively high load (at low RPM), so in many cases, the ICE is most efficient while accelerating. So, you accelerate. Then, once you're going your maximum speed, you shut down (or as a safer option, go to neutral) and coast down to your minimum speed.

The Prius can (and does) pulse and glide a different way. (I find it's most aggressive about it at or below 60 MPH indicated. Above that, it can shut down, but there's various reasons to keep the engine running, so it rarely does unless you're decelerating.) Instead of accelerating, it charges the battery. And, instead of coasting when it shuts down the engine, it discharges the battery to continue providing the vehicle with power.

I don’t know about you, but for a long time, I have been the owner of an electric car. Still, regular cars create a disturbing level of pollution in the environment. Once I ordered a study on carbon dioxide emissions for a college assignment from the website https://ukessay.com/lab-reports-writing-service and the results of the study were impressive. I made my report and talked about how society needs to reduce the emissions of chemicals into the environment as quickly as possible.