Adamas: lithium usage for EV batteries up 76% year-over-year in February 2019

In February 2019, 76% more lithium carbonate equivalent (LCE) was deployed globally in batteries of newly-sold passenger EVs than the same month the year prior, according to a model-by-model build-up using Adamas Intelligence’s “EV Battery Capacity and Battery Metals Tracker”.

Among all metals and materials used in EV battery cathodes globally, LCE deployment in February 2019 saw the greatest gains versus the year prior speaking to the Chinese industry’s growing adoption of NCM cathodes in place of LFP cathodes, fueling an increase in LCE consumption per kWh of capacity deployed.

Another reason for the increase is that BEVs and PHEVs were collectively responsible for a greater share (92%) of global battery capacity deployed in February 2019 versus the year prior (87%)—meaning that a greater share of kWh deployed this year was in the form of Li-ion cells, as opposed to NiMH cells, which contain no LCE whatsoever.

Globally, the top five cell suppliers by LCE deployed in February 2019 were (in descending order) Panasonic, LG Chem, CATL, BYD and Samsung SDI. Collectively, these five suppliers were responsible for almost 75% of all LCE deployed globally in passenger EV batteries in February 2019, according to Adamas Intelligence data. 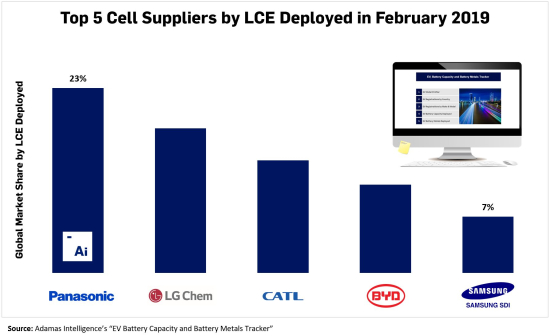