Ford Motor Company has made a $500-million minority equity investment in electric vehicle maker Rivian (earlier post). In addition to the investment, the companies have agreed to work together to develop an all-new, next-generation battery electric vehicle for Ford’s growing EV portfolio using Rivian’s skateboard platform.

The Rivian electric drive features four independent motors with 200 horsepower available at each wheel. The battery pack can be configured to up to 180 kWh.

In February, Rivian announced an equity investment round of $700M led by Amazon. The investment comes on the heels of Rivian’s reveal of the all-electric R1T pickup and R1S SUV at the LA Auto Show last November. (Earlier post.) 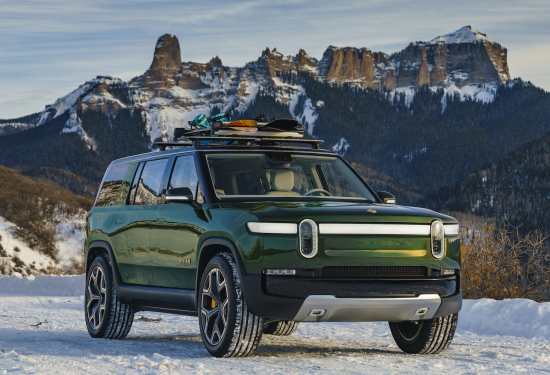 Rivian already has developed two clean-sheet vehicles with adventurers at the core of every design and engineering decision. The company’s launch products—the five-passenger R1T pickup and seven-passenger R1S SUV—will deliver up to 400-plus miles of range and provide a combination of performance, off-road capability and utility, starting in late 2020.

As we continue in our transformation of Ford with new forms of intelligent vehicles and propulsion, this partnership with Rivian brings a fresh approach to both. At the same time, we believe Rivian can benefit from Ford’s industrial expertise and resources.

Ford intends to develop a new vehicle using Rivian’s flexible skateboard platform. This is in addition to Ford’s existing plans to develop a portfolio of battery electric vehicles. As part of its previously announced $11 billion EV investment, Ford already has confirmed two key fully electric vehicles: a Mustang-inspired crossover coming in 2020 and a zero-emissions version of the best-selling F-150 pickup.

Will this be a big step forward for Ford or backward for Rivian?

I would think that it is a step forward for both. Rivian has a better expertise on technical EV-evolution than Ford. Ford has mass production facilities at their disposal which Rivian does not have. Together, they can complement one another which is a gain for both.

I agree with yoatmon, good assessment.

Well, that's one way for Ford to catch up; buy a spot in the race for EV PUs.

@Yoat, @Lad, agreed. Both benefit, (Rivian hugely, IMO).
Building cars is very hard and Ford can do it.
The EV people have a separate set of skills that Ford can use quickly, and maybe some IP that they need.

The latest count arrived at 486 e-vehicle builders in China versus a dozen in USA and another dozen in EU.

The results are that over 66% of the world e-vehicles and associated batteries are built in China.

China is electrifying its transport vehicles (cars, trucks, buses, high speed e-trains, 2 and 3 wheelers etc) much faster than USA and EU. Who will first master the mass production of electrified airplanes?