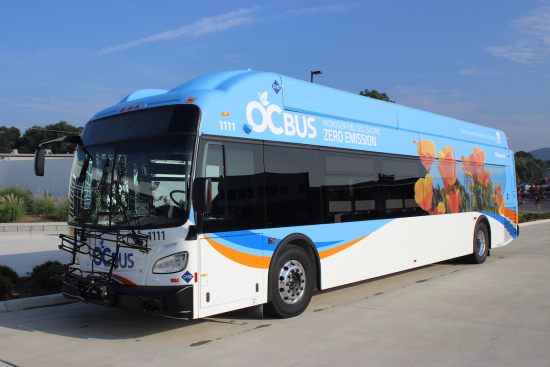 The forty-foot Xcelsior CHARGE H2 was equipped with a Ballard Power Systems fuel cell, producing electricity in motion to continuously recharge the 100 kWh of batteries to power a Siemens electric drive motor.

The bus operated for 28 hours and achieved 10.4 miles per diesel gallon equivalent. When the hydrogen tanks were fully depleted, the zero-emission bus (ZEB) operated on battery reserve for an additional 20 miles, to achieve a combined range of 350 miles.

The demonstration was completed on OCTA’s Route 47 operating from Fullerton to Newport Beach in April 2019 with a payload representing fully-seated passenger capacity.

This is a significant milestone for OCTA, New Flyer, Ballard Power Systems, California Air Resources Board, and Center for Transportation and the Environment. The fuel cell with stored hydrogen performed ideally as an on-board battery charger, allowed the bus to reach 350 miles without refueling or connecting to the electric grid. This represents a significant team accomplishment, and celebrates the power of fuel cell-electric buses—alongside battery-electric—as effective means to deploy zero-emission solutions across America.

As announced April 2018, New Flyer is delivering 10 forty-foot fuel cell-electric Xcelsior CHARGE H2 buses to OCTA, along with 10 of the same model to the Alameda-Contra Costa Transit District under the Fuel Cell Electric Bus Commercialization Consortium Project, funded by the California Air Resources Board and its California Climate Investments Program (CCI).

CCI is a statewide program putting cap-and-trade dollars toward reducing greenhouse gas emissions, strengthening the economy, and improving public health and the environment. Center for Transportation and the Environment (CTE) is a non-profit organization helping transit agencies and bus manufacturers to develop and deploy zero-emission, fuel cell electric, and battery-electric transit buses.

Under California’s Innovative Clean Transit regulation, starting in 2023 large transit fleets will be required to purchase ZEBs for at least 25 percent of total procurements, ultimately transitioning to 100 percent ZEBs by 2040. This New Flyer demonstration shows fuel cell-electric buses can play a critical role in a zero-emission fleet, operating 24 hours a day with refueling in as little as six minutes, allowing the highest utilization possible.

Proterra offers a BEV bus with 350 miles of range. The difference is that the Proterra bus will use half the energy and be considerably cheaper to buy and operate.

The Proterra bus will not do 350 miles in winter conditions. The Proterra bus does not necessarily use half the energy. If the Proterra bus cannot make the mileage claimed, it cannot be recharged quickly (as in less than 10 minutes and consequently, you then need more Proterra buses to cover the mssion that one diesel, nat gas or H2 bus can cover).

This has been discussed before, if the Proterra bus is charged from any thermal power plant, it is NOT using half the energy compared to steam methane produced hydrogen used in the fuel cell bus.

They can make H2 at the fueling yard from renewable methane.

“The Proterra bus will not do 350 miles in winter conditions. ”

Most bus routes cover significantly less than 150 miles per day. Even if winter conditions cut that in half the Proterra is still in good shape to complete the day’s load.

If you have routes that need more range per day in most cases you can rotate routes allowing buses with a range surplus alleviate those that might be short.

The Proterra bus will not do 350 miles in winter conditions.<\i>

"The Proterra bus will not do 350 miles in winter conditions."

Orange County does not much in the way of winter conditions and most transit buses do not need that much range anyway. Note that it took 28 hours for the FC bus to run 350 miles. Also most transit systems do not run much service at night. And Park City, Utah which does have winter conditions seems to be doing just find with their Proterra buses. My comment about half the efficiency was based on the common assumption of using surplus renewable power (which is mostly non-existent) for electrolysis.

"They can make H2 at the fueling yard from renewable methane. "

Good luck with that. Steam reformation does not scale well. In the Salt Lake City area, we have 5 oil refineries and I believe that they all get the hydrogen they need for the catalytic cracking from a single source. And just where will you get the renewable methane. Most of it is either used at the source or just added to the pipe line. Anyway, you are just using up something that needs to replaced with fossil natural gas.

"Orange County does not much in the way of winter conditions and most transit buses do not need that much range anyway. Note that it took 28 hours for the FC bus to run 350 miles. Also most transit systems do not run much service at night. And Park City, Utah which does have winter conditions seems to be doing just find with their Proterra buses. My comment about half the efficiency was based on the common assumption of using surplus renewable power (which is mostly non-existent) for electrolysis. "

My comment was directed at the more general theme of why pursue fuel cell buses vs . battery only buses. It has been documented that many BEV buses, including those with large battery capacities often fail to cover their required route profile owing to
1. climate (very hot,cold etc. precipitation etc.)
2. load
3. terrain

The mental gymnastics that is done to pretend that there are no practical advantages to a fleet vehicle being able to operate more or less continuously is amazing. Park City does not appear to be a large agency with a large fleet with correspondingly large and varied needs and is thus, not a good example. How about LA, Chicago, NYC, Toronto, Vancouver, Boston etc. Does the same apply?

If you desire very high variable renewables (>60%), the mathematics dictate that there will be periods of large surpluses. It is impossible for batteries to address that market (multi-day storage implying cycling of sometimes single digits per year). Additionally, unlike some, I have no problem with steam methane reforming or biomass based h2 sources because the Proterra buses when they charge overnight invariably charge from thermal sources unless extremely fortunate (hydro, wind) and the comparison then becomes equivalent. Another quick note, if we are just talking about transit use, there is more than enough biomass to provide feedstock for steam methane production.